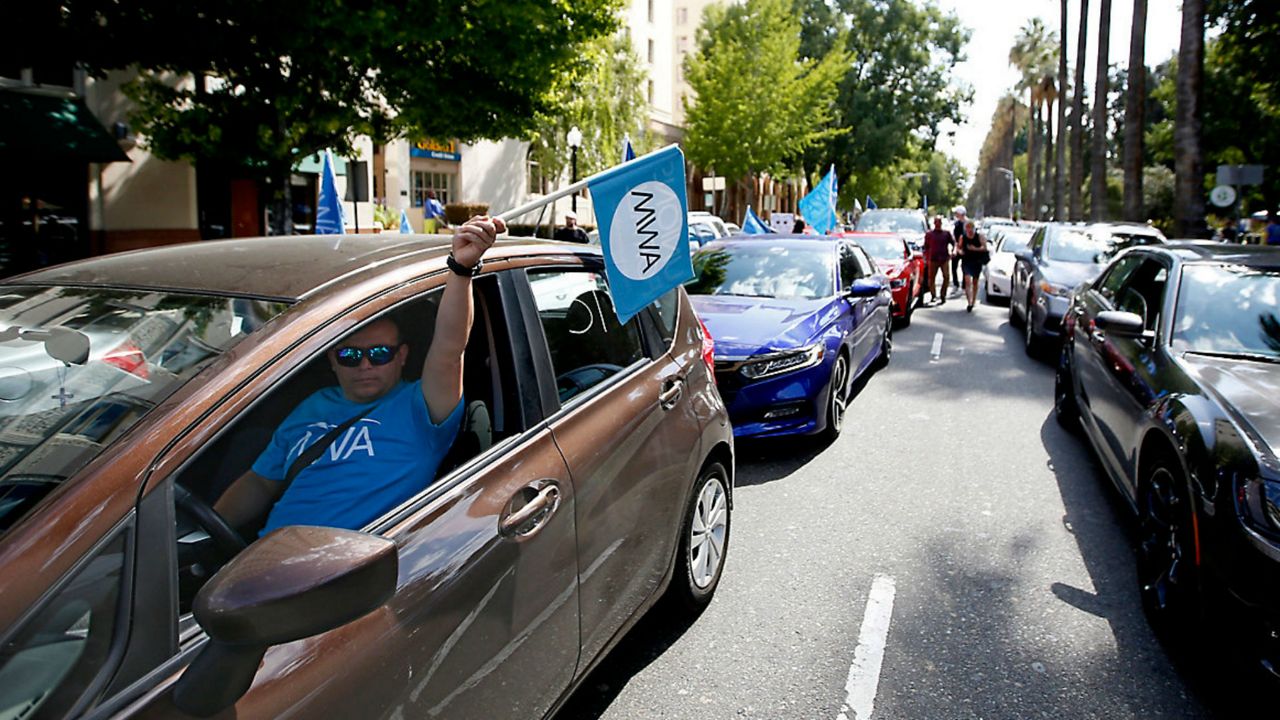 In this Aug. 28, 2019, file photo, dozens of supporters of a measure to limit when companies can label workers as independent contractors circle the Capitol during a rally in Sacramento, Calif. Ride-share company Uber and on-demand meal delivery service Postmates sued Monday, Dec. 30, 2019, to block a broad new California law aimed at giving wage and benefit protections to people who work as independent contractors. The lawsuit filed in U.S. court in Los Angeles argues that the law set to take effect Wednesday, Jan. 1, 2020, violates federal and state constitutional guarantees of equal protection and due process. (AP Photo/Rich Pedroncelli, File)

California State Assemblymember Lorena Gonzalez authored the controversial Assembly Bill 5 (AB5), which puts a strict definition on who is an independent contractor and who is a company employee. AB5 went into effect on January 1, 2020 after it was approved by Governor Gavin Newsom in 2019.

Earlier this week, California Attorney General Xavier Becerra filed a lawsuit against rideshare giants Uber and Lyft, alleging that both companies have tried to wriggle their way out of the legislation. Assm. Gonzalez called Atty. Gen. Becerra’s move “historic.”

“We have the Attorney General, the highest law enforcement enforcer in the state, along with the city attorney from the cities of San Francisco, Los Angeles, and San Diego, all come together and said, ‘Enough is enough. We are enforcing this law.’”

CA. Atty. Gen. @AGBecerra filed a lawsuit against @Uber and @lyft, alleging that they have tried to wriggle their way out of AB 5. The bill classifies many independent contractors as employees.@LorenaSGonzalez said AB 5 "came at the perfect time" before the pandemic. pic.twitter.com/9YQzWis31r

Assm. Gonzalez said it’s amazing that companies could continue to operate in California when their employees were classified as independent contractors.

As of Thursday, one in five Americans have filed for unemployment benefits due to the economic effects of the COVID-19 pandemic. According to Assm. Gonzalez, companies like Uber, Lyft, Postmates, Instacart, and Doordash have never paid into the state’s Unemployment Insurance Fund.

“In this pandemic, we're learning something that we haven’t really I guess internalized before: The cost when you don't pay into unemployment insurance, the cost when companies don't provide their workers with workers’ compensation or paid family leave or sick leave. So much of AB5 and the discussion around it was about minimum wage and overtime, the basic things we think of when what workers deserve in the workplace.”

Assm. Gonzalez said the pandemic has made us think about who is responsible if an employee gets sick on the job.

“We've always said it's the employer's responsibility, but when a worker doesn't have those basic workplace protections, it falls on basically tax payers, the general public,” she said. “We're seeing our Unemployment Insurance Fund really be depleted. We are the first state to actually ask for and access a loan from our federal government to refill our Unemployment Insurance Fund.”

Until Atty. Gen. Becerra filed a lawsuit against Uber and Lyft, Assm. Gonzalez said unfortunately, California accepted that big companies operated for nearly a decade without ever paying into the state’s Unemployment Insurance Fund.

“Now if you think about this, a mom-and-pop restaurant that right now can't open up has paid into that fund diligently their entire time of operating business,” she said. “And yet these companies have operated outside of the law, and now we're in a position where we're going to have to go seek a federal loan. What happens then?”

Assm. Gonzalez said we know what happens: In two years the loan is due, and the people who have to cough up more cash are the law-abiding business owners who have been paying into the Unemployment Insurance Fund this whole time.

“So that mom-and-pop restaurant, when they open back up, they're going to be paying more because Uber never paid a cent,” she said.

“The Dynamex Decision was the unanimous, bipartisan decision by the State Supreme Court to say, ‘Hey, enough is enough. We can't continue this bizarre way of looking at who's an independent contractor and who's an employee, so we're going to have a very specific ABC test.’ And that was a superb broad decision. They just kind of put it out there and said, ‘All right, there you go, we're going to look at this differently.’”

After The Dynamex Decision, there was pressure by individuals and businesses to refine the definition of an employee in the legislative process. Assm. Gonzalez did just that with AB5.

“We took a huge broad decision and really pulled it down and said, ‘What is this decision really trying to do, and what kind of exemptions can we make in order for it to really serve its purpose without interfering with people who are true sole proprietors, who really run their in business and have the ability to negotiate their own rates and conditions?’ And we thought we did a pretty good job. I mean, that's the biggest labor law reform that's probably happened in decades in this state, maybe even the country.”

Assm. Gonzalez said it was especially tricky to define musicians.

“There was such animosity between the industry and worker representatives that they never came to a conclusion of how to deal with musicians,” she said. “Some of them are truly employees and then they have this long history of kind of just bringing artistic abilities and coming together as a band and maybe nobody's really the employer, and they're performing at a venue that's not really the employer. How do we deal with that?”

Those negotiations got resolved. Finally, unions, independent artists, and the recording industry agreed upon two different definitions of musicians.

“We really kind of refined a musician that’s an employee versus musicians who come together with their individual talent to create a product that’s really unique, where nobody is really the employer,” she said.

Assm. Gonzalez said the bill authors also refined language around freelance journalists, writers, photographers, and videographers in order to give them the flexibility. If someone is truly serving as their own independent force, he or she can continue to do so.

Assm. Gonzalez said for many workers, AB5 “came at the perfect time” during the pandemic.

The pandemic has also shown Californians that under the law, working remotely or working during different times of the day has always been allowed.

Assm. Gonzalez said people who enjoy being independent contractors and therefore complain about AB5 may never have had to think about something like a pandemic before.

“I understand that it's always easy to say, ‘I don't need these protections,’ ‘I don't need somebody to pay into UI for me,’ or ‘I don't need workers compensation,’ until you do,” she said. “Now, a lot of freelancers are obviously, desperately filing for for the taxpayer-funded [Pandemic Unemployment Assistance (PUA)] as they should, and I’m glad that we have that safety net for them, but the point being the reason we have unemployment insurance and safety net programs in general are for times that we don't expect when things go wrong.”

Unemployment insurance and safety net programs can only exist if they’re paid into. Hence Atty. Gen. Becerra’s lawsuit against rideshare moguls Uber and Lyft for not paying into insurance funds.

“Luckily the federal government is paying the PUA, but those are taxpayer dollars. We're all paying for that,” she said. “And so in order to create fairness in the workplace, we need to make sure that everybody is paying into this insurance fund that we’re then pulling out of in times of need.”

The pandemic has shown Californians why insurance funds are important.

“Maybe people had never had access before, had never really thought about before, because you know they had never lost their job, or they had never gotten sick at work, or these issues hadn’t come up,” she said. “But now we have a much better understanding of why these programs exist.”