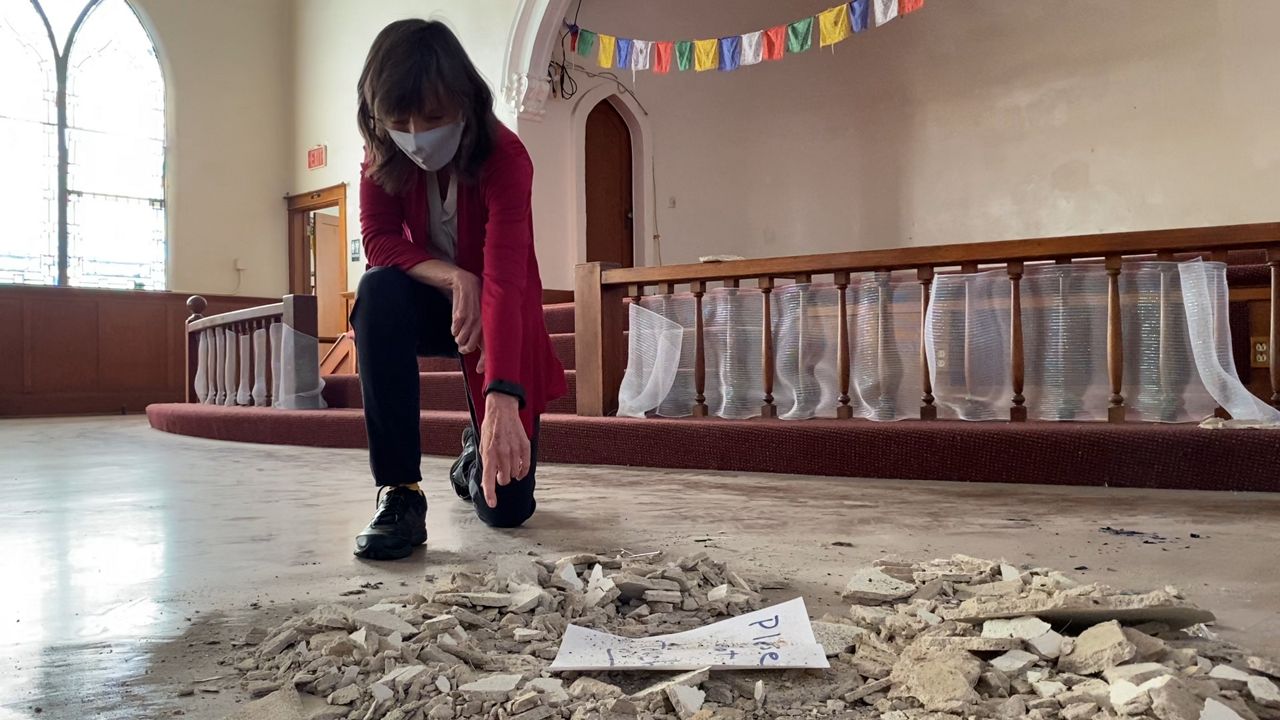 
He has been collecting his clothing pieces for years, and as gender non-conforming, he feels just as comfortable in denim as he does in one of his many dresses.

“It feels empowering; this is part of me. I can enjoy being who I am,” Bowling said.

Bowling, 73, said has not always been so comfortable with himself. Growing up, his father was a Methodist minister and the family had a peripatetic life — in each new location Bowling did his best to fit in.

“I didn’t feel like I could totally be myself,” Bowling said.

Later he began experimenting more with gender expression. In his 20s he moved to Los Angeles and was living a few blocks from the beach when he came across The Church In Ocean Park, another Methodist church but one quite different to the congregations of his youth.

“I went in and started getting involved. I realized quickly it was more innovative than what I had grown up in. I was enchanted by it,” Bowling explained.

The organization’s ethos, however, is radical. It was founded in 1923, and since its inception, the church has focused on acceptance. Activism is a running theme. In the 1980s, the church’s main sanctuary space was used as a meeting location for campaigners fighting for better rent control in the city. The current pastor, Rev. Janet Gollery McKeithen, has been marrying LGBTQ+ couples since 2008.

While the Methodist Church hosts them, in practice it is a non-denominational space. Sermons and talks are just as likely to be about spirituality as climate change, racial justice and immigration.

It was this community that helped Bowling feel more comfortable expressing himself fully.

“It was a crucial element of me accepting myself more. Being more welcome of who I am,” Bowling said.

For almost 50 years, Bowling attended services in person, but since the pandemic he and the 126 other members attend virtually. While many religious communities are back to meeting in person, The Church In Ocean Park does not have a date set to return to their sanctuary because of massive structural damage. The roof is falling down.

When she was planning to reopen the space, McKeithen found a pile of rubble on the floor.

“About six months ago the ceiling fell, luckily no one got hurt,” McKeithen said.

They had an assessment done and realized the entire roof was compromised. The repairs will cost $100,000.

“I wasn’t too worried in the beginning. When I found out the insurance company would not cover it, that is when it all sank in. We don’t have a lot of big donors,” McKeithen said.

They have turned to GoFundMe but at the moment are far from their goal. Despite the challenge, McKeithen is optimistic in part because other organizations have expressed interest in keeping the structure standing.

“The Church In Ocean Park is 98 years old. It is in the middle of a historic district. It is a contributing building. The Santa Monica Conservancy is concerned that it remains here,” McKeithen said.

While the structure is important, McKeithen also notes that the community fostered by the space is too valuable to lose, particularly for people who have felt excluded from other religious groups.

“This church is completely different, we aren’t trying to create disciples of Jesus Christ. Everyone we meet has something to offer us,” McKeithen said.

It is that unusual approach to religion that has kept Herley Jim Bowling returning to The Church In Ocean Park since he first entered its doors. He said meeting over Zoom has been fulfilling, but he misses sitting with other congregants in the building he has come to love.

“The most important thing we can be doing is creating loving communities. It doesn’t depend on a building but it really helps to have a space that’s dedicated to that,” Bowling said.