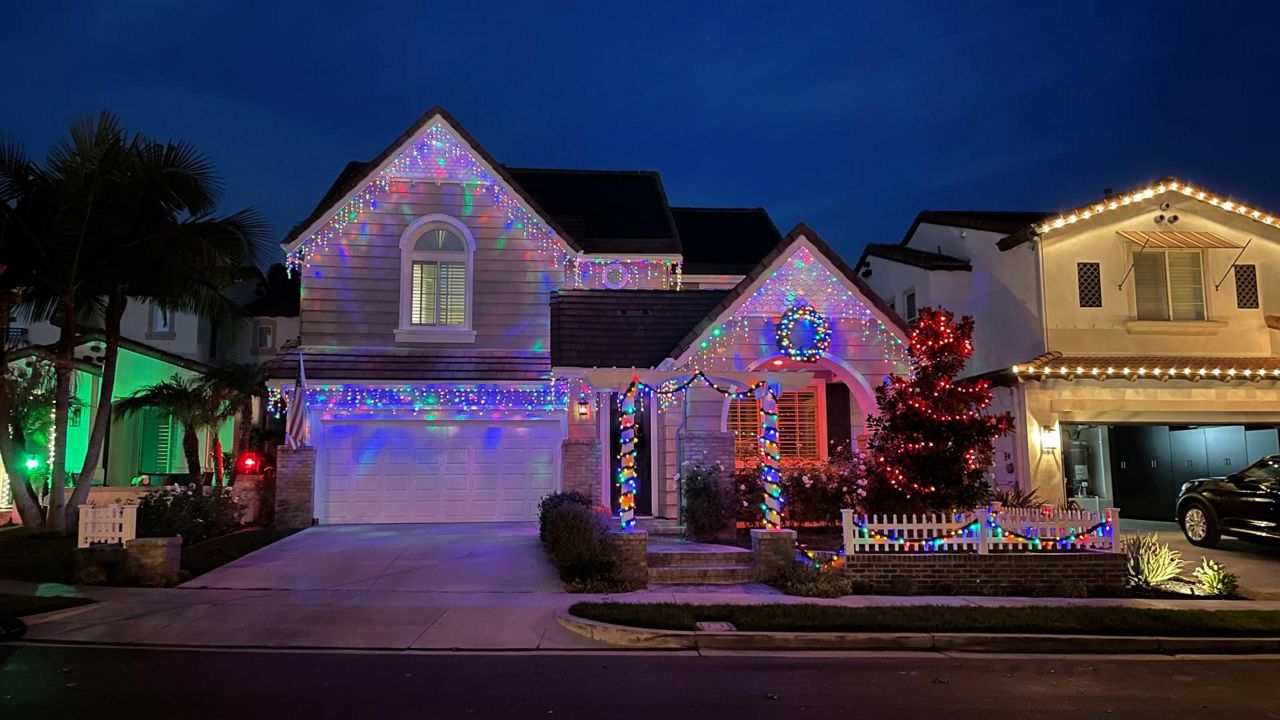 ORANGE COUNTY, Calif. — Christmas comes alive on a street in Ladera Ranch with homes lit up in holiday cheer.

While the neighbors used to string lights from home to home across the road, permitting and threat of fines stopped the long tradition. But there is no “bah-humbuggery” on Baudin Circle — just Christmas cheer.

It’s that time of year again at Aaron Younkin’s house on Baudin Circle. He explained that it happens every year around Thanksgiving. Just before Thanksgiving, Younkin pulled out a large plastic storage bin with a black lid from his garage. He said he has about 30 strands for the outdoors.

When he puts up the lights on his home, Younkin says it’s an all-day job but that he enjoys it.

“Honestly, I love Christmas," he said. "I love everything about Christmas.”

Younkin said he especially enjoys hanging the lights at his home. He’s been doing it every year for the past 20 years.

"I will tell you, it’s a little tedious sometimes to do it," he added.

But as Younkin will tell you, all he needs is a little motivation. And on a recent day off from a stressful job, he was feeling an extra dose of holiday spirit. Plus, he was feeling good about not having to do one part he dreads: stringing the lights at the top of his two-story home.

"I’m not afraid of heights," he said. "But that high on a ladder scares the hell out of me."

Fortunately, an unidentified elf has already helped him with that part (Younkin hired someone to help him). So he only has to focus on the rest of the home, which got started with the white arbor in his front yard. He creates a candy cane stripe effect along the sides with a strand of green garland adorned with colored lights.

Though Younkin has been putting up holiday lights for decades, he says it’s something he didn’t grow up with.

“We had great Christmases, but my dad never put up lights," he said, adding that his father worked in sales and didn’t have the time.

But for Younkin, even though it’s a busy season for his line of work in the grocery industry, the lights are an important part of signaling the start of the Christmas season for his family.

"My kids love it," he said. "My wife loves it. The neighborhood is great when it’s lit up."

In the past, Baudin Circle had many more lights, including lights connected between six homes and a wreath above the street. A tree in the center of the circular driveway at the end of the street was also lit with the help of many extension cords and tons of strands of lights.

"It was great," Younkin said. "It was actually really beautiful."

But he added that what you might call a “bah-humbug” situation several years ago forced the neighbors to stop doing it.

"[Orange] County would not let us do it anymore," he said. "And it costs a fortune to get an insurance waiver to do that. So we all said 'No thanks.'"


The county has said in the past the reason for permit and insurance requirements was for safety reasons. Lights were also required to leave enough clearance for emergency vehicles to get through.

But that situation hasn’t dimmed the holiday spirit at the Younkin home. The lights still shine bright — well, once Younkin gets all the lights up just the way he wants.

"I mean, you don’t want them to look janky or horrible, you know," he said. "So you do need to make it look nice."

Younkin has strung lights around a wreath, lights around the fence, lights around a tree in the front yard and lights anywhere he can sneak them in. Before he gave the go-ahead to turn the lights on, he inspected his work from the middle of the street facing his home.

And then Younkin signaled it was time to turn on the lights. The home twinkled in the dusk of night officially ringing in the holidays at his home.

Do you want your home, your neighborhood or your friends’ holiday lights featured on Spectrum News 1? On Dec. 15 at 6 p.m. and 9 p.m., Spectrum News 1 will feature holiday light displays from around the Southland on "An Elvin Holiday Bright Lights Special.” Fill out the form below for a chance to be featured.