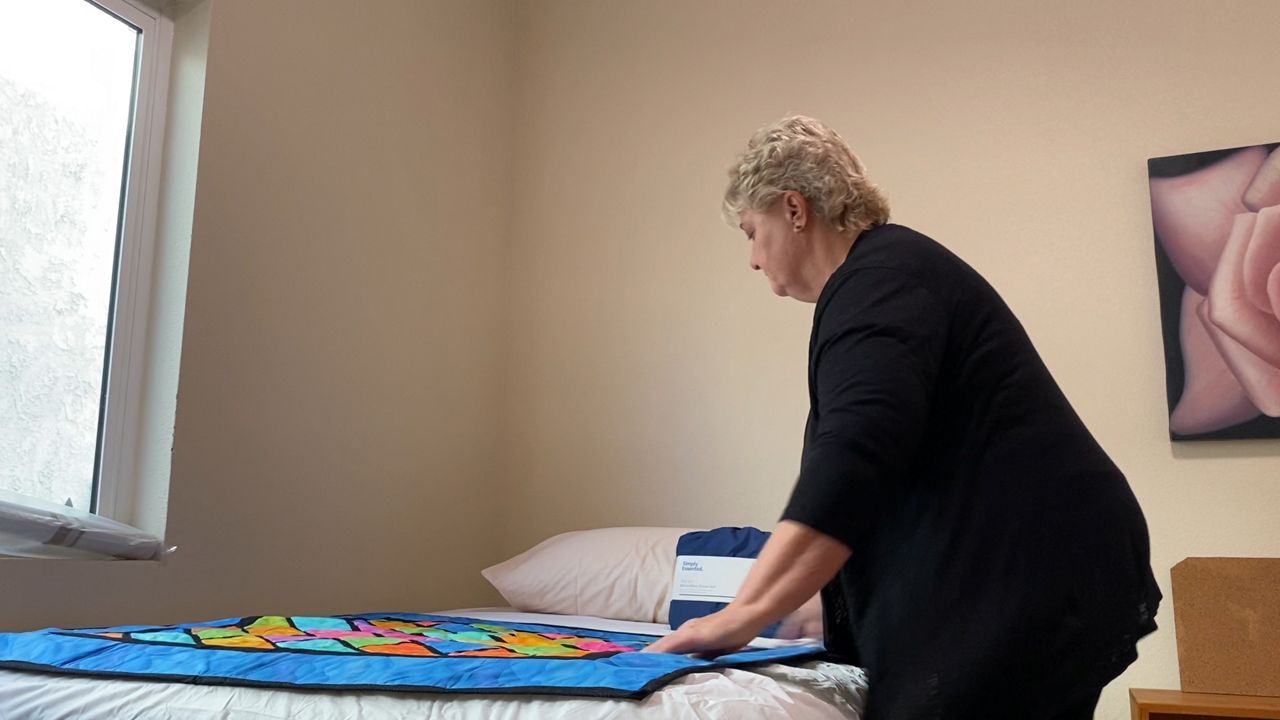 LOS ANGELES — Blanca Ramirez understands the value of fresh sheets, a warm bed and a safe place to call home.

They're simple things often taken for granted, but to Ramirez, they were life changing.


Ramirez arrived 25 years ago at The Los Angeles House of Ruth a domestic violence shelter with her three kids after leaving an abusive environment.

Along with those daily necessities for the family, she also received support, social services, therapy, childcare at the shelter and a path towards independence.

“It was stable, there was structure,” Ramirez said.

Today, she works full time for the shelter as a house manager and helps new residents find that same sense of stability.

“I pray that when new people arrive, I make them feel the way I felt, welcomed, loved, safe, secure,” she said.

The Los Angeles House of Ruth was founded over 40 years ago and serves women across the city who are experiencing homelessness as well as domestic violence. They run shelters in different areas around LA, and on a recent Tuesday afternoon, Ramirez was preparing to welcome a new family to a recently renovated home that will soon house eight to 10 families.

The shelter provides residents with any items they might need like towels, clothes, toiletries, dishware, baby bottles and diapers.

Ramirez explained that many arrive with a few pieces of clothing and little else, because they had to leave dangerous situations without the time to pack their belongings.

While the Los Angeles House of Ruth has committed, long-term donors, they are always short of supplies. This year, however, homewares, bedding and other goods began arriving from an unexpected source: Buy Nothing groups.

Founded by Liesl B. Clark and Rebecca Rockefeller in Washington State, The Buy Nothing Project started out as a few Facebook groups offering neighbors the chance to post items they wanted to give away — anything from an extra loaf of bread to a refrigerator.

The project is intended as a move towards a circular, mutual economy and it has been gaining traction across the globe.

Buy Nothing groups number 4.27 million members. The guidelines are simple: everything is offered up for free, there is no bartering or trading. Groups tend to be private, closed to people who live in the neighborhood.

They exploded in popularity during the pandemic as people were starved for community and connection. During COVID over two million people joined Buy Nothing Groups.

Jane Covner was one of them.

“I heard it was a great site to get wonderful things people don’t need,’ said Covner, who joined the Buy Nothing group in Studio City.

Covner is on the board of the The Los Angeles House of Ruth and her intention was to help furnish the new shelter. She put out a call asking for essentials like diapers and was delighted to be inundated with “chairs, tables, lamps and artwork. Once I explained who it was for and why it was need, people just opened their hearts and doors and cars and brought stuff over to the house.”

Instead of a few pots and pans, Covner was able to furnish the entire house through the Buy Nothing group. It created a community within her neighborhood, as people banded together to support women they would never meet.

For some, giving directly to the shelter was deeply personal.

“A lot of people who donated goods to my house. As they met me they would take me aside and explain that they had been victims of domestic violence,” Covner said.

While shelters often rely on donations, Cover explained that Buy Nothing is different because she can post on the site asking for specific items she is looking for, such as rubber ducks, children’s books and socks. Because so little money has was spent on the interiors for the new home, it also freed up funds.

“It gives us extra money to go the extra mile for our clients. If they need extra therapy, we have the money to give them what they need, instead of using that money on a chair, or a dishwasher,” she said.

As Cover began bringing items to the new house over the past few months, Ramirez and other managers at the shelter were stunned by the donations.

“People are used to paper plates and plastic when they come here,” Ramirez said. “Some people don’t know how to use a coffee machine or a regular toaster, it makes them feel better about themselves.”

She reflected on her own journey and the emotional distance she has travelled since arriving at the shelter.

“You know how they say, that chain, that domestic violence chain keeps on going? Mine broke when I came here.”