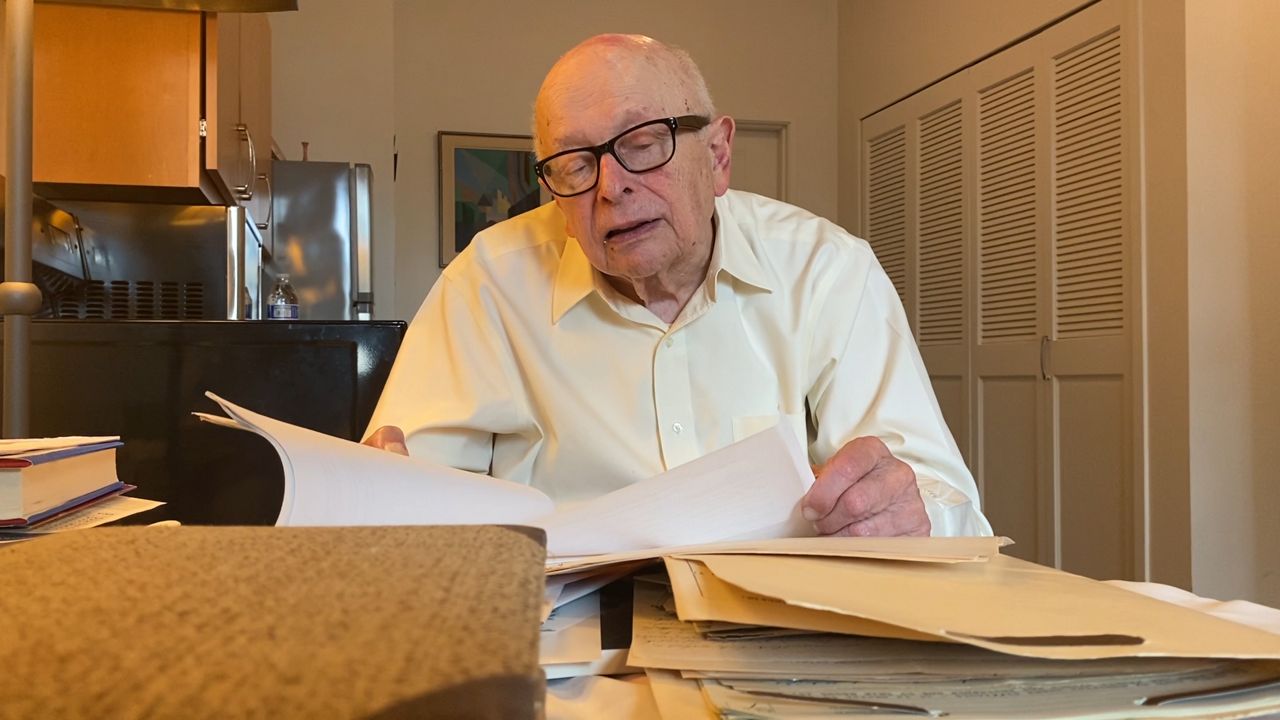 LOS ANGELES — Close to the UCLA campus on Wilshire Boulevard, situated between two Jewish synagogues, is a retirement home.

The windows are wide, looking out onto the street. Friendly staff greet residents by name and check every person’s COVID-19 vaccine card. A screen thermometer checks an individual’s temperature as he or she enters.


For 95-year-old Paul Kester it is home, and it’s a far cry from where his life began in the city of Wiesbaden, Germany.

Kester is a Holocaust survivor who escaped Nazi Germany at 13 years old. He was taken to Sweden as part of the Kindertransports: organized rescue efforts to save children during WW II.

“I got a letter from a relative at a Jewish boarding school [in Sweden] that had to take 40 children — I got on that list,” Kester said.

Kester’s parents and other family members who were not able to leave Wiesbaden were killed in Auschwitz.

Before war officially broke out, Jewish people, like Kester’s family, were already being persecuted — their rights removed. Kester remembers every detail from that time, but one day in particular stands out: November 9, 1938, also known as Kristallnacht, the night of broken glass.

That night Jewish homes, synagogues and stores were broken into. Windows were smashed, buildings were looted and destroyed. Understandably, Kristallnacht marked a terrible turning point in Kester’s young life.

“It was the beginning of the end of Jewry in Europe," Kester said "It was such a clear demonstration by the Nazis that their main program, besides conquering the world, was to eliminate ‘inferior races’ — the Jewish race being the lowest of the low.”

Kester’s family owned a clothing store in Wiesbaden, and after a night of desecration, when Jewish men were taken as prisoners to concentration camps, the shaken teenage boy and his mother began to clean up the mess.

“We were told to clean up and for two weeks I was collecting broken glass. I remember that sometimes I couldn’t sleep because I had the noise of broken glass in my ears.”

Not long after Kristallnacht, Kester traveled to safety in Sweden where he remained for the rest of the war. He still has dozens of letters sent from family in Germany, weeks before they were killed.

He also has letters that were returned, once his parents, cousins and grandmother were deported and sent to concentration camps.

Kester has shared his story many times, but said remembering Kristallnacht specifically is important because it was the culmination of so many prior attacks and laws implemented to target Jewish people. To commemorate and memorialize Kristallnacht this year, 83 years after it took place, The Holocaust Museum Los Angeles has put together a virtual talk.

Kester and other historians will speak.

The museum also has a permanent exhibit that uses images, stories and artifacts to explain the events that led up to Kristallnacht.

“It’s not just important to learn the history of the Holocaust, but learn the lessons of the Holocaust” said the museum’s CEO, Beth Keane, explaining that recent history as well as current events serve as a reminder that antisemitism is still rife. “We saw Neo-Nazis marching in Charlottesville and just like the events in Germany before Kristallnacht, there were many red flags."

The museum’s permanent exhibit features fragments of prayer books retrieved from synagogues that were burned on November 9 and 10, 1938.

“People aren’t born to hate, that’s not instinctual, people have to be taught to hate," Keane said. "That’s why it’s really important for us to teach young people the importance of being empathetic.”

Sharing his own, personal story is a way Kester hopes to build deeper empathy, compassion and understanding. He has traveled back to his home town of Wiesbaden many times and has spoken to children there about his experience during WWII and treasures the letters he has received from the young students.

“I get written notes, thanking me for having shared my history," Kester said "They say they will make sure they adhere to the message I gave them and try to be good citizens…that, for me, makes it worthwhile."