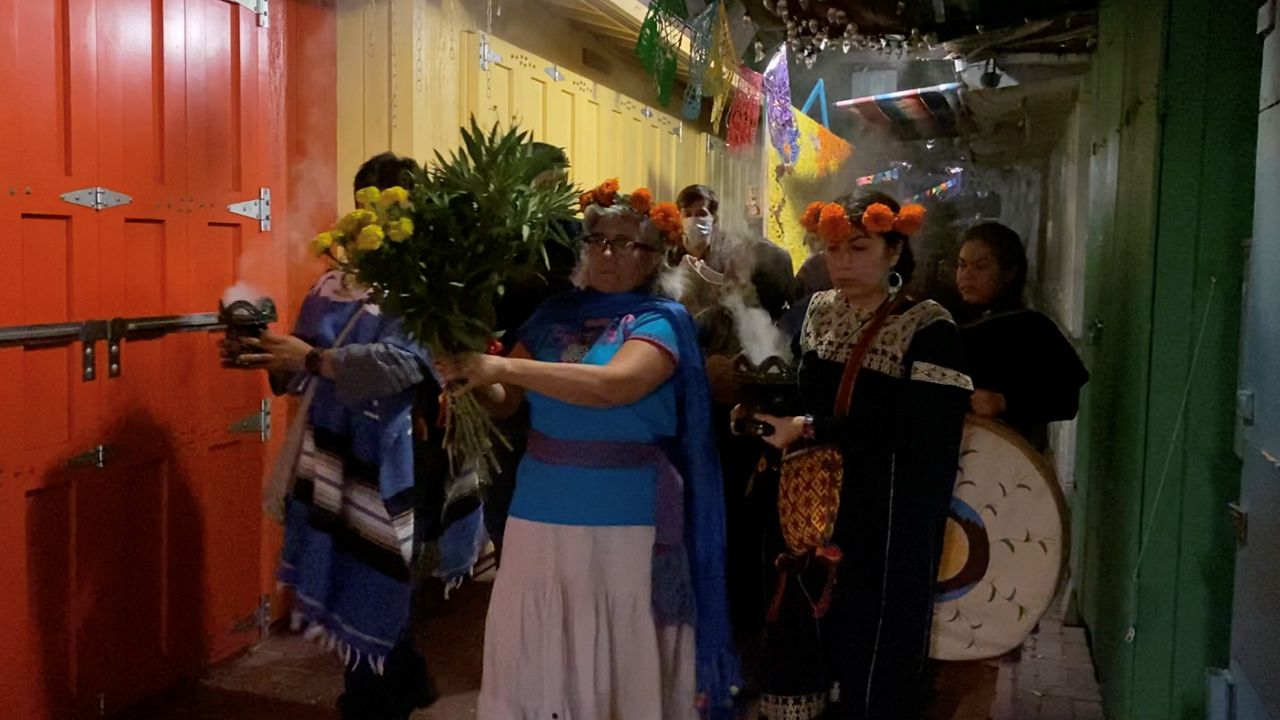 LOS ANGELES — Olvera Street is coming to life this week as it hosts its annual Day of the Dead celebration, a nine-day festival meant to honor and remember loved ones who have died.

"Growing up when I was in Mexico, the day of the dead it's a big celebration at school, with family," Nancy Hernández said.

Although she has celebrated Dia de los Muertos all her life, she went all out this year by dressing up.

Ever since the pandemic began, Hernández said she is taking nothing for granted, much like the vendors on Olvera Street.

The plaza, nestled next to Chinatown in downtown Los Angeles, is known as the "Birthplace of Los Angeles." The businesses, including restaurants and vendors selling Mexican folk dresses, pottery, piñatas and sombreros, have been on life support since the COVID-19 pandemic shutdowns began. 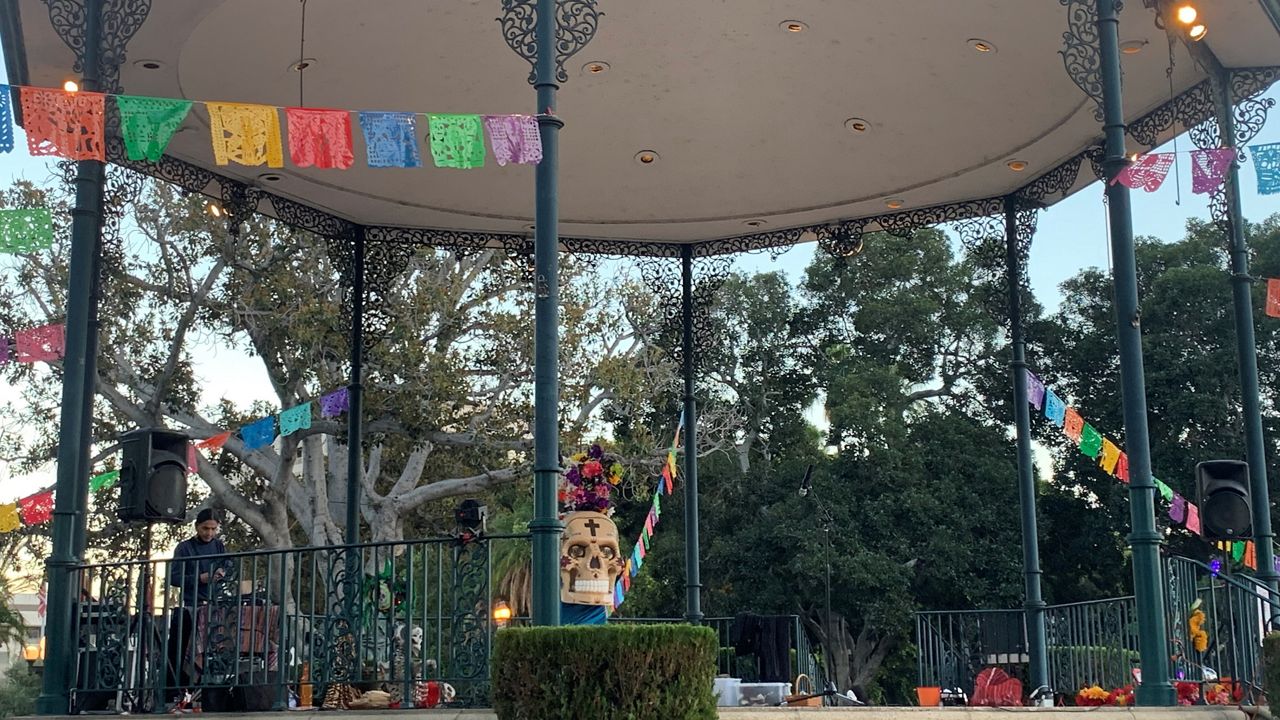 A skull with a colorful floral arrangement sits at the Olvera Street kiosko Tuesday evening, where Day of the Dead festivities will be underway until Nov. 2. (Spectrum News/Yazmin Cruz)

"We've lost four merchants since COVID started," said Valerie Hanley, a merchant at Olvera Street for 56 years who had to shut down for four and a half months and saw fellow vendors lose their livelihoods.

Hanley, who added that the "city has been good" at working with merchants on rent abatement, noted that foot traffic during the week is still relatively light and has picked up during the weekend as a nearby church reopened and people make their way out of their homes. But the coronavirus killed tourism, which brought half of her income, said Hanley, a member of the Olvera Street Merchants Association Foundation. 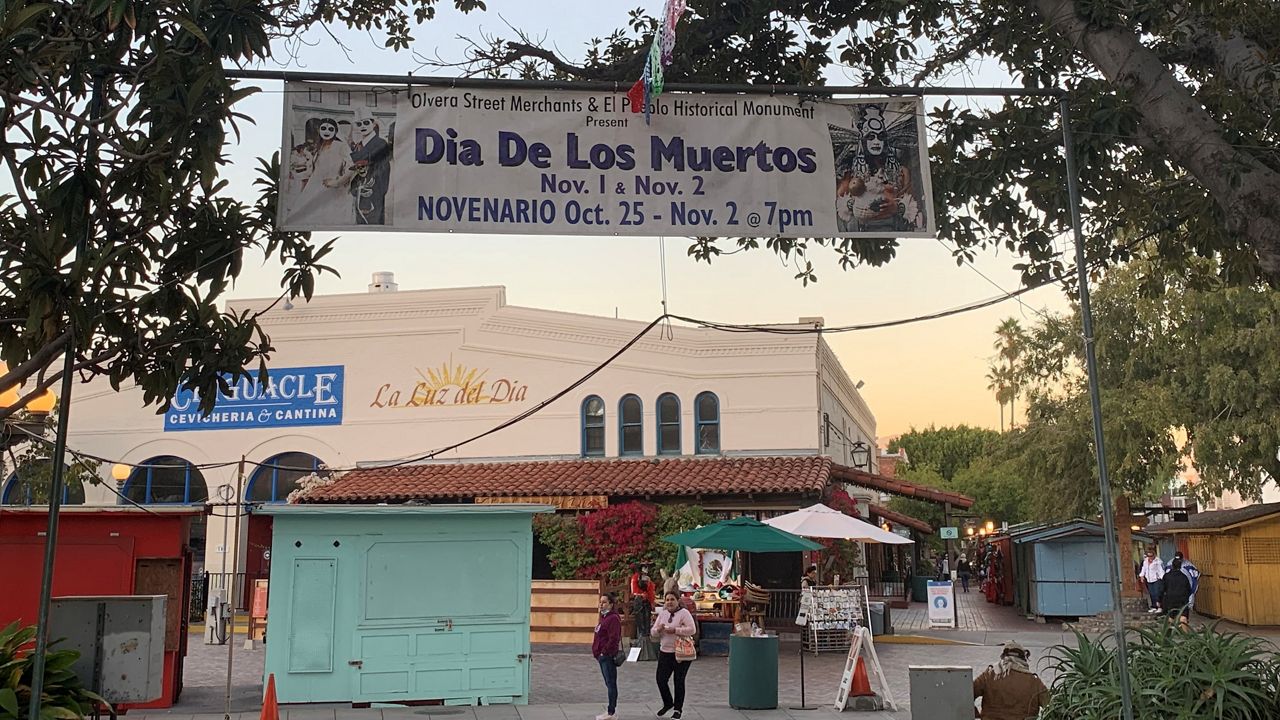 This year's events, while happening in person, also saw some disruption due to the pandemic.

An art walk that usually starts off the Day of the Dead celebration at the beginning of the month and features local artists was not held this year as the merchant association did not know whether restrictions would permit it at the time, Hanley said.

While the Day of the Dead celebration was held virtually last year, this year, attendees will have to follow COVID-19 guidelines, including wearing a mask and physically distancing themselves as the event returns in person.

Pan dulce or sweet bread and champurrado, a thick chocolate-based sweet drink, are usually handed out, but this year, attendees will only get to enjoy the bread due to COVID restrictions.

"We tend to get a large response," Hanley said about the community's interest in the festivities, adding that the light rain kept many away on Monday but that they expected the number of people attending to increase over the weekend.

The nightly festivities, running through Tuesday, start with a traditional Mayan blessing followed by a live theater performance and then a procession at 7 p.m. led by an indigenous Aztec group called Grupo Tartalejos, who use incense to bless the ceremony. The procession begins in the plaza at the top of Olvera Street where a large cross sits and then makes its way to the kiosko, Hanley said.

A nightly ceremony will take place at the kiosko — adorned with colorful papel picado made out of tissue paper cut into intricate designs and a large calabera or skull — to honor loved ones of a merchant family or community member that Hanley chooses.

Starting at 6 p.m., attendees can enjoy live theater presented by Teatro del Barrio. The performance by actors donning skeletal costumes in La Danza de la Muerte tells the story of Dia de los Muertos with its indigenous roots and how it has transformed. 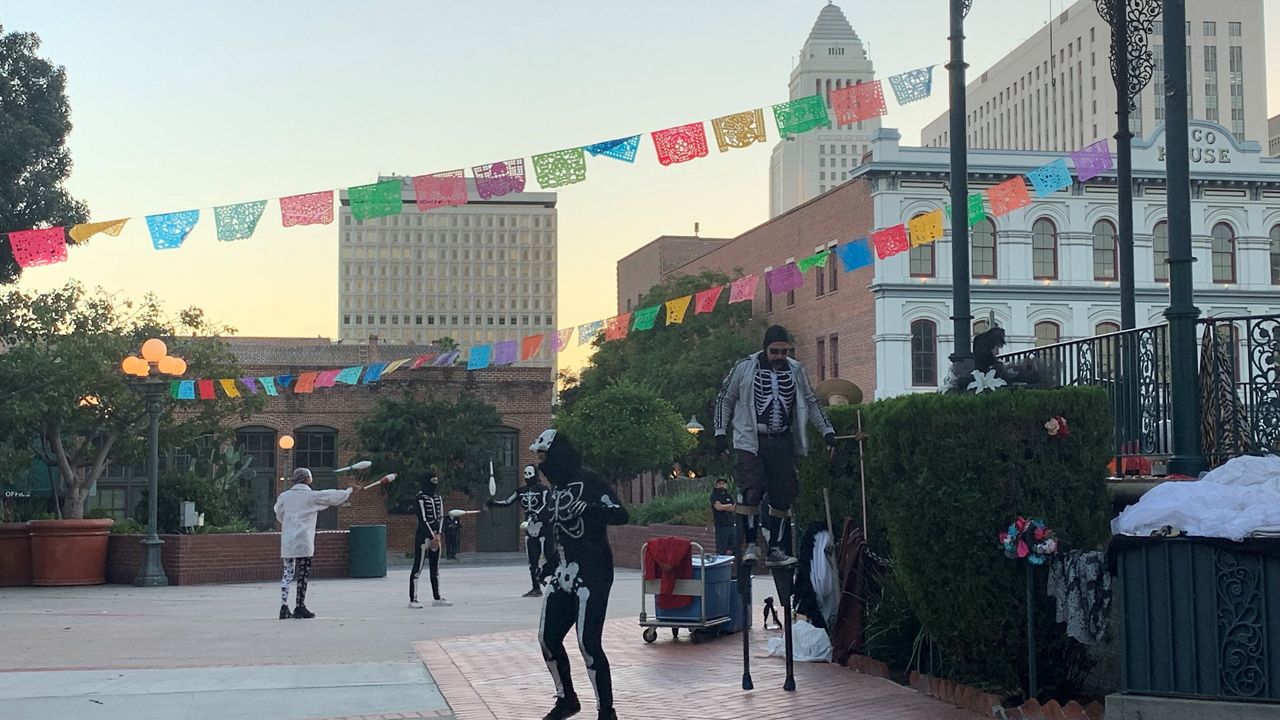 Las Ofrendas will take place at 5 p.m. Friday and will allow people to add copies of loved ones' photos to a community altar. Altars are usually decorated with orange, yellow, and red marigold flowers and include offerings such as drinks or foods offered to loved ones as they make their way back to the living.

From Saturday through Tuesday, attendees also will be able to get their faces painted for a fee by Kahlovera, an artist known for her vibrant and traditional skull-looking designs.

And on Saturday, a 5K Carrera de los Muertos will take place, with some in full skull makeup, marigold crowns and skeletal costumes.