TEMECULA, Calif. — When Raul Carrillo was 7 or 8 years old, his father took him to see the LA Dodgers play the Atlanta Braves. The Dodgers' right field player Raul Mondesi — who is from the Dominican Republic — became Carrillo's favorite player not only because they shared a first name but because, according to Carrillo, Mondesi was a star player.

The Los Angeles Dodgers and the Lakers became one of his many passions, but growing up on the east side of Long Beach, Carrillo noticed murals that led him to discover another passion — art.

"A lot of the murals really sparked my interest in artwork. Another thing was that many of my friends were into Dragon Ball Z, those types of anime characters. That is when I first started drawing," he said.

Meet Raul Carrillo.
He's an artist who was inspired by the murals in Long Beach. Carrillo's passion is drawing portraits, but he is also incorporating the @Dodgers and @Lakers into his work.#Dodgers #Lakers
FULL STORY: https://t.co/i5g2p8glKn@SpecNews1SoCal pic.twitter.com/CY19QpC9RX

Since he was 10 years old, Carrillo has not stopped drawing — evolving his work from anime to portraits.

"Portraits are my interest. I got tired of Dragon Ball Z and Pokémon characters. It was not a challenge for me. I wanted to do something more challenging. I fell in love with portraits," said Carrillo.

The challenge, Carrillo said, with portraits is making the drawing as close as possible to what the subject looks like in real life.

"It's a love-hate relationship because it is so difficult to make it look exactly like that person, but then again, it helps me grow as an artist. The more challenging the piece is, the better I get. The more lessons I learn from it," he said.

Looking for ways to be different from other artists and make his work stand out, Carrillo stumbled upon pieces of wood one day as he walked the aisles of a craft store.

"I was always drawing on paper. I wanted to be different. I saw these round pieces of wood, and I was like, let me give it a try. The first drawing I did was my nephew. I was not sure if pencils were going to work on wood because no one really draws on wood, at least pencils on wood. It worked out and people started asking about them," said Carrillo.

Drawing on paper became a thing of the past.

From start to finish, Carrillo said he takes anywhere from eight to 12 hours to complete one portrait, and while he can complete a portrait in one day, he said he prefers to take his time.

"I prefer to do it in two days — just to rest my back and rest my mind. I feel like when my mind is fresh, I can draw better. It also gives the customers what they want and I am able to put as much detail as I want," he said.

Once Carrillo drew his nephew, niece and godson, people began to reach out to him to do portraits of their loved ones or their favorite athletes.

"The most popular ones [requests] are people's family members who have passed away. A lot of the time they are gifting it to family members," he said.

Carrillo, who said he got into the Lakers after becoming a Dodgers fan, also draws LA sports stars like Kobe Bryant, LeBron James and Anthony Davis. 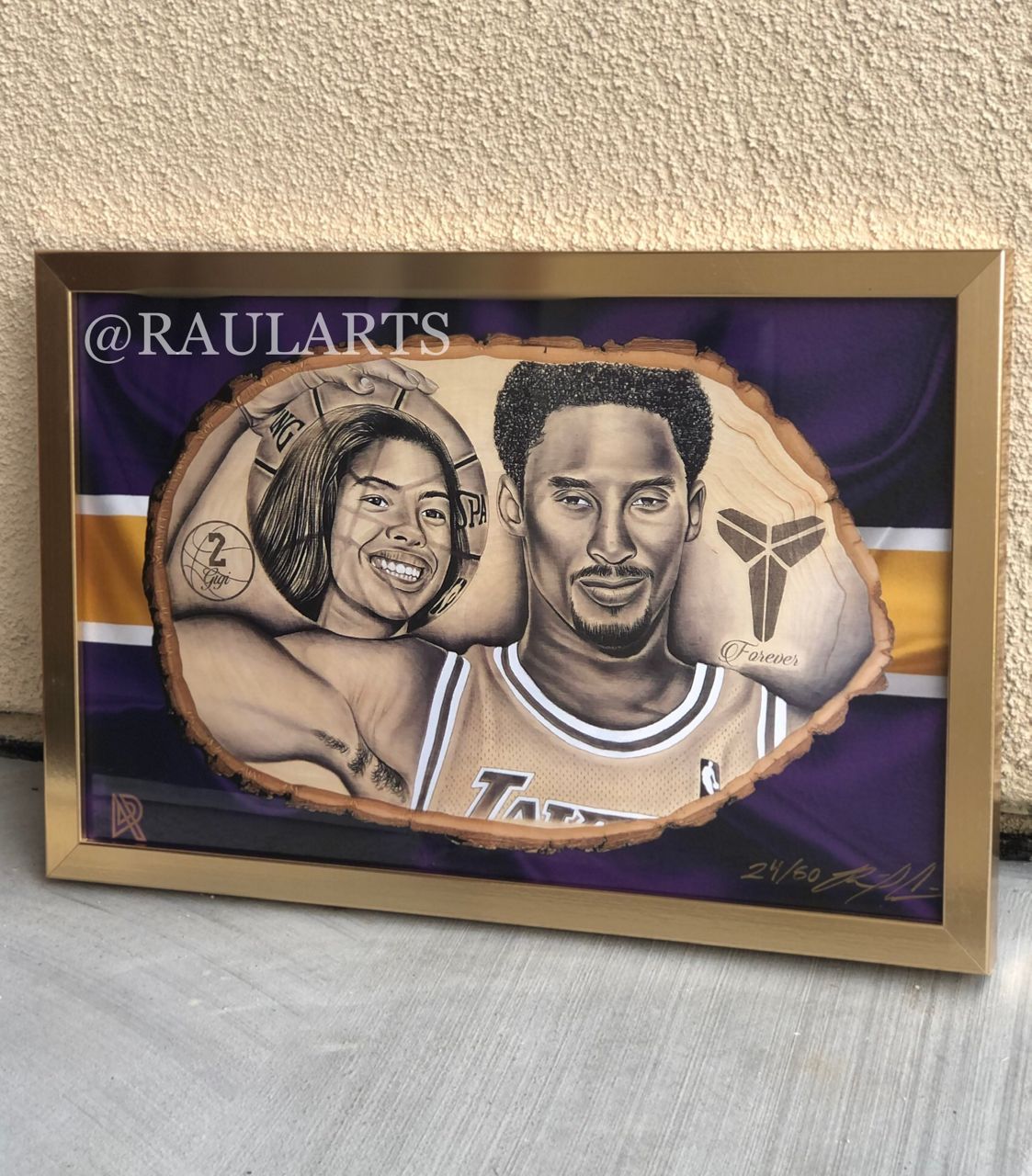 "Kobe has been and will always be my favorite player. After the Lakers drafted Kobe, he just grew on everybody in LA and across the world. Being from LA, I think you would take pride that you are from the city and he was on your team. LeBron James and Anthony Davis are becoming Laker legends. They've already won a championship and hopefully in the upcoming seasons win a couple more," he said.

After the Dodgers won the World Series in 2020, and the LA Lakers won their championship, too, Carrillo drew the piece "Job Finished." 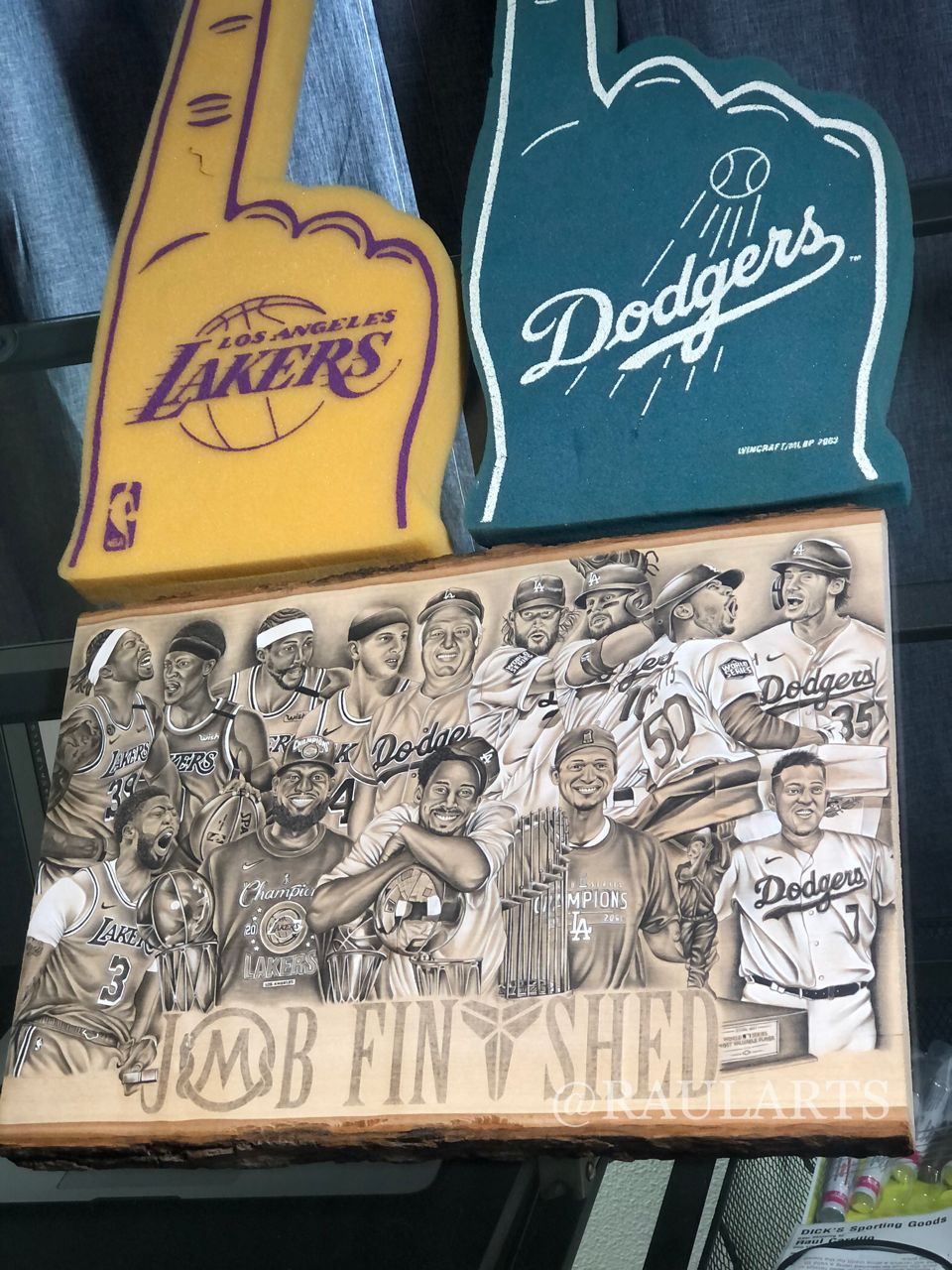 The piece done on wood shows the Dodgers and the Lakers with their perspective championship trophies. At the center is Kobe Bryant, who would say "job finished" after winning a championship.

"In the middle we also have Tommy Lasorda who passed away. He was a former Dodger player and manager," said Carrillo.

One of Carrillo's most recent works is called "The sLAndlot."

"The piece was inspired by the movie, "The Sandlot." It is the famous photo of the characters. What I did here was to swap out the actors' heads and put all Dodgers players. It's all done on wood that I bought at Home Depot and I cut myself," said Carrillo. 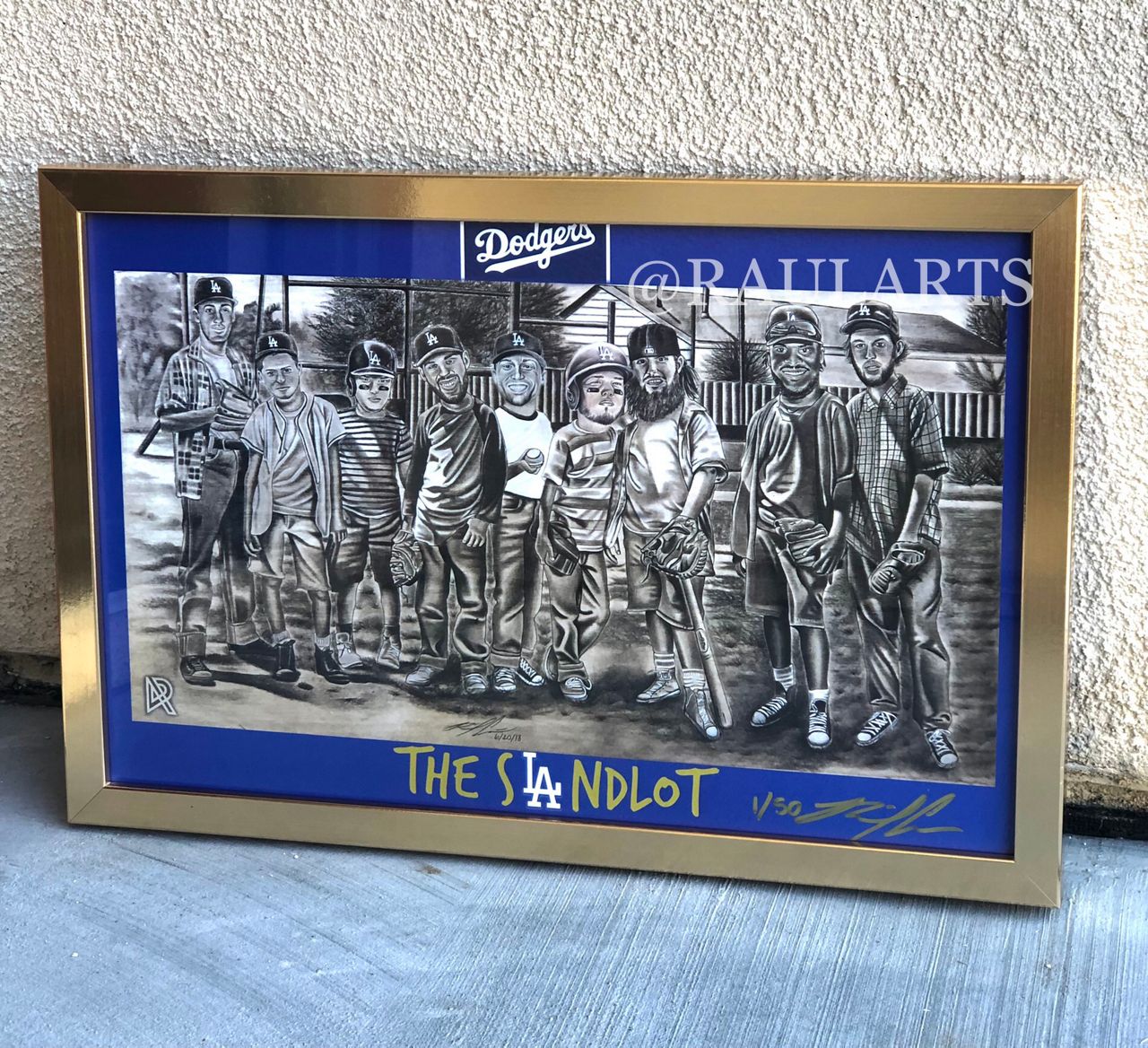 “It’s all graphite pencil mixed in with a little bit of charcoal and some acrylic paint for the Mexican flag. It is all on wood,” he said. 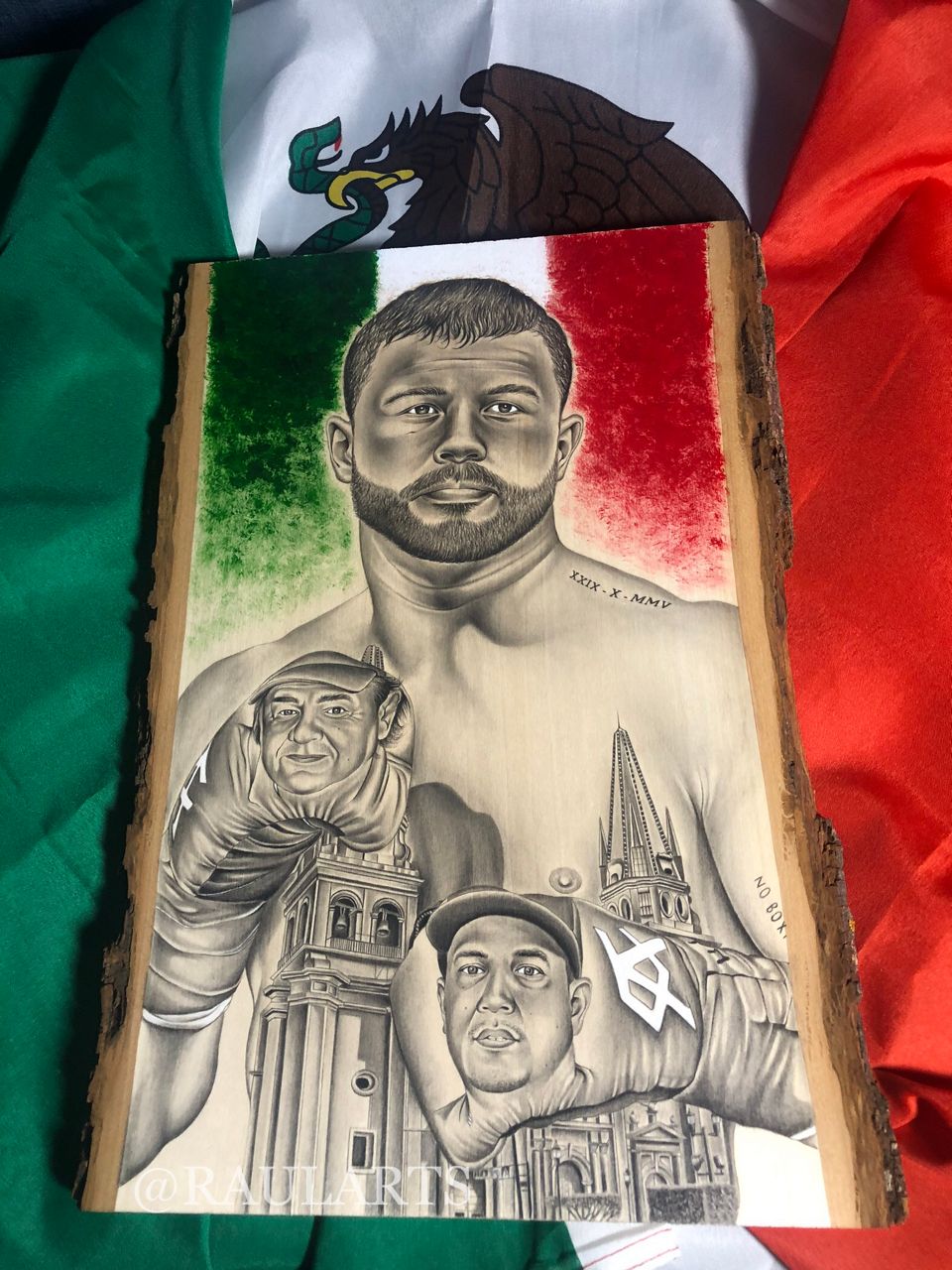 Carrillo hopes to get in touch with Canelo to gift him the artwork.

“I know he trains in San Diego, also lives in San Diego. That is my goal right now, to give him this art piece to him. He’s one of my favorite boxers of all time,” he said. 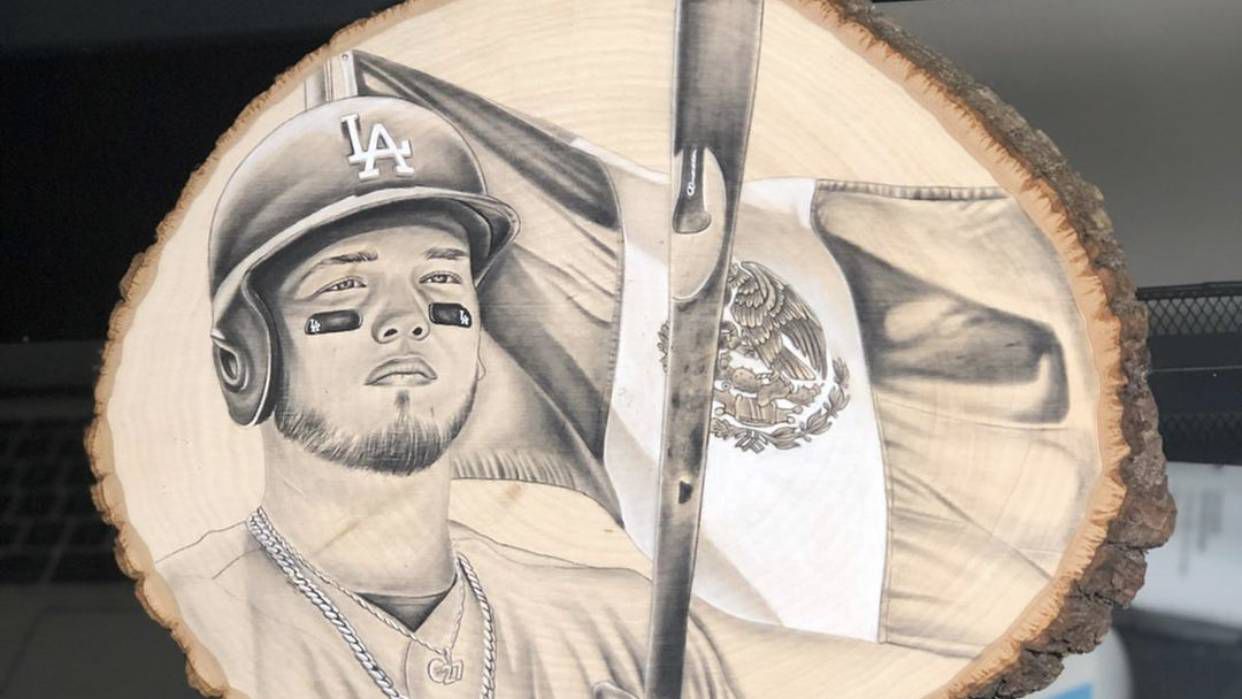 Carrillo said he has been fortunate to have done art pieces for the Dodgers’ third baseman Justin Turner and former Dodger Alex Verdugo. 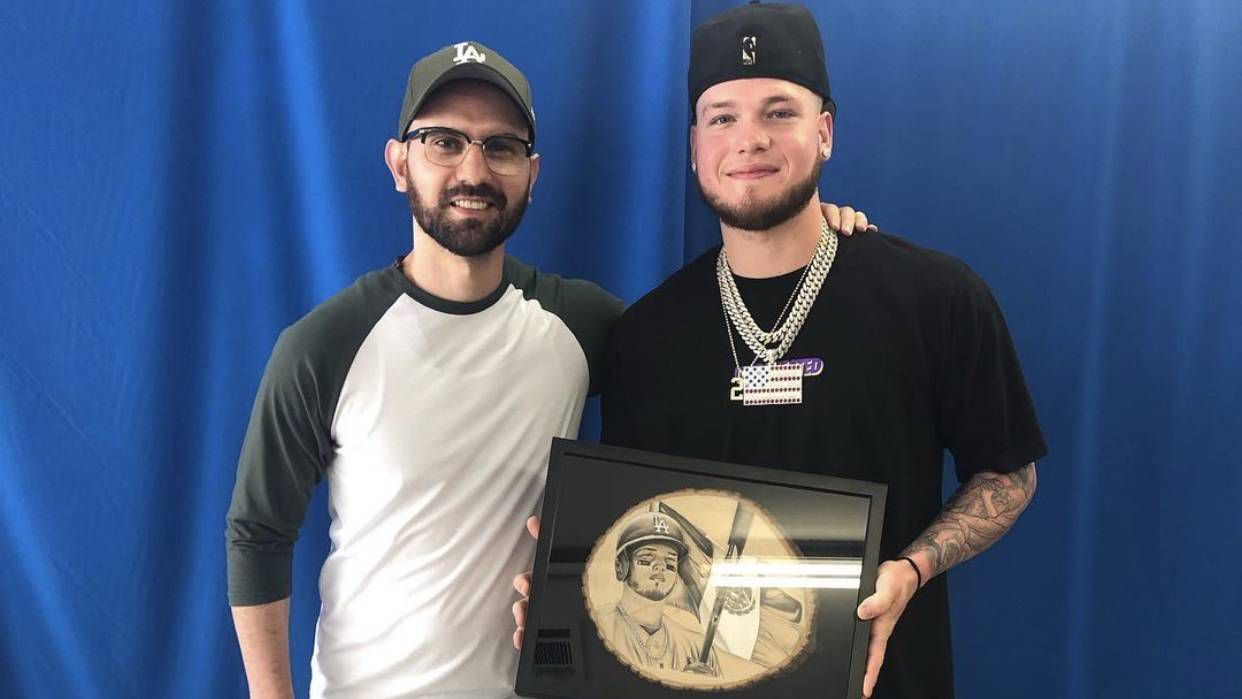 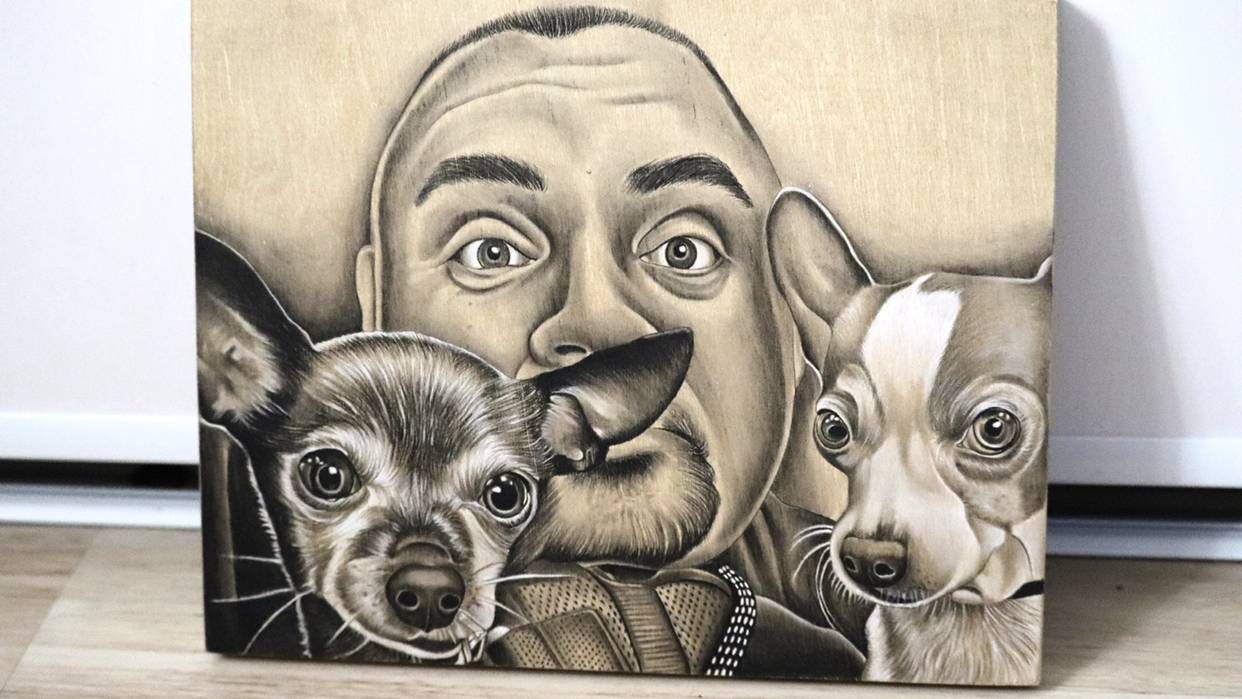 Carrillo said he has also done pieces for a couple of rap artists.

His goal is to inspire the next generation of artists to find their own creative and authentic style, like he is when drawing on wood.

"I've been fortunate to get messages often on social media from fellow artists that tell me how much of an inspiration I am to them. That is a blessing, and it's very humbling," he said.

Carrillo's other goal is to be able to donate a percentage of every print and original art pieces to families like his.

"Both of my parents are immigrants from Mexico. As a family, we struggled in many different ways," said Carrillo.

Through his work, Carrillo also hopes to break the mental health stigma in the Latino community.

More of Carrillo's work can be seen on his Instagram page and his website, where his art pieces are available for purchase.

One of Carrillo's latest art work is in honor of his favorite boxer, @Canelo
Carrillo hopes to one day be able to give the art piece to the fighter.
FULL STORY: https://t.co/i5g2p8glKn@SpecNews1SoCal pic.twitter.com/3cMFvhAuJo