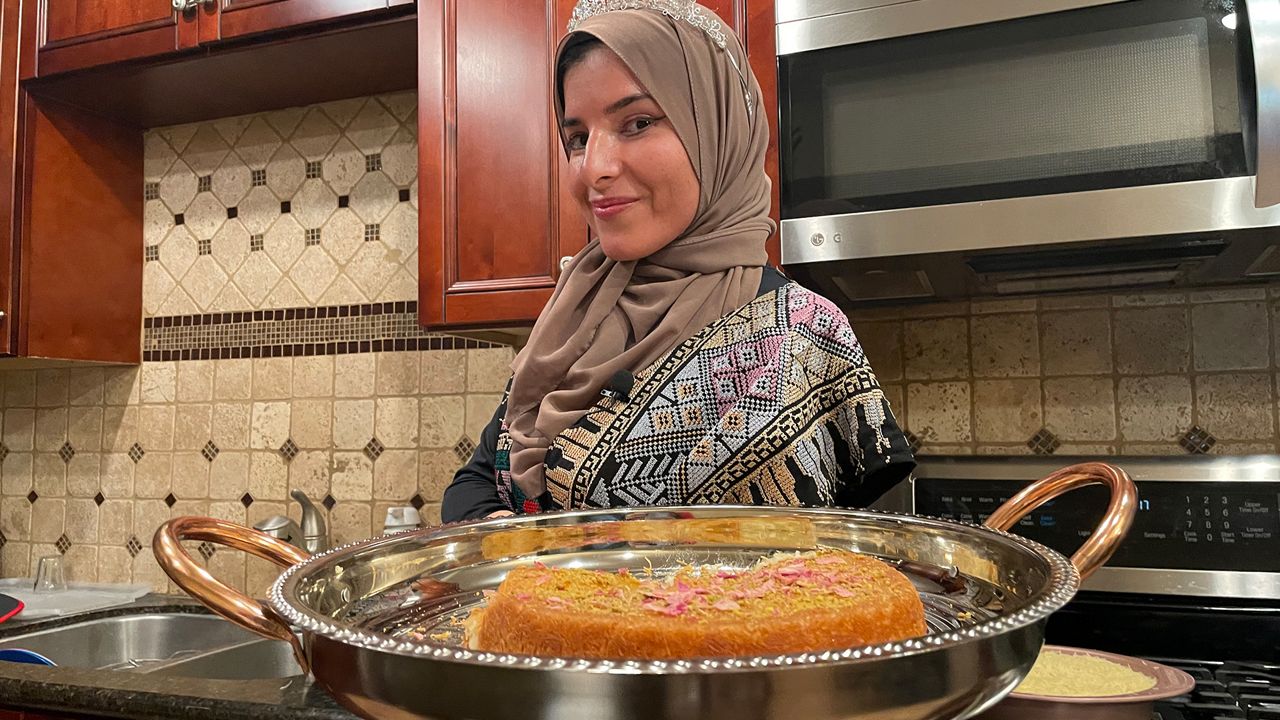 Knafeh Queens is helping change the narrative around Palestinians

RANCHO CUCAMONGA, Calif. — One way to make inroads and connections within a community is through the sharing of homemade food, and the pie-baking mother-daughter duo Knafeh Queens is harnessing that power to help change the narrative around Muslims and Palestinians.

Knafeh is an Arabic dessert and a source of great pride within Muslim and Arabic communities, but still relatively obscure to outside communities. Fatmah Muhammad, a Palestinian mother of four, grew up making it with her mother, and she figured there is no better dish to create a purposeful brand around that shares the positive side of her culture that doesn’t get talked about often enough.

Muhammad explained how she and her eldest daughter, Rheyanah Williams, were both inspired into action after the 2015 San Bernadino terrorist attack, when a Muslim couple killed 14 people at a holiday party.

“The cashier that day wouldn’t even look at me. It’s crazy how the news can influence what people think,” Muhammad said. “We’re nothing like what the news says we are, and that was really unsettling. We weren’t gonna have it,” said Williams.

The company has been in operation since 2018, but they both agreed that the Israel and Hamas crisis in May of 2021 made them feel like their effort to reshape the narrative around Muslims — and especially Palestinians — was more important than ever. And with each knafeh pie they deliver, Muhammad and Williams say they’re telling their side of the story.

“No, we’re not oppressed women, we’re not ignorant, or whatever else the news says about us,” Muhammad said. “We’re resilient people.”

The mother-daughter duo make and ship thousands of pies all over the country from their commercial kitchen, but for this story, Spectrum News 1 caught them at Muhammad’s mother's house, where she was making a pie just for her family.

Knafeh has very deep roots in the entire Middle East, though food anthropologists generally agree it originated within Palestinian communities many centuries ago. Today, it’s made in every single country across the Middle East.

It’s a truly delightful dish made of shredded, hair-like phyllo dough, sandwiching a mixture of salty white cheeses. The whole pie is griddled — with lots of butter — until crispy on both sides, then topped with a sugary simple syrup. It’s both sweet and salty and crunchy and soft, winning over most who try it.

Their message seems to be getting across, as evidenced by the reaction videos Muhammad posts to her Instagram account.

"Any customer, they tell me that 'I didn’t just receive your Knafeh, I felt so much love so much hospitality… I felt like I was a part of your family,'" said Muhammad. "And that’s the kind of experience that Palestinians give. That’s a part of our identity."

Muhammad and Williams note that if everyone can sit around the dinner table and enjoy this classic Arabic dish, the way their family does, then they did their part to help make the narrative around their community just a little bit sweeter.

CORRECTION: An earlier version of this story incorrectly stated the year the company was started. This has been updated. (July 6, 2021)