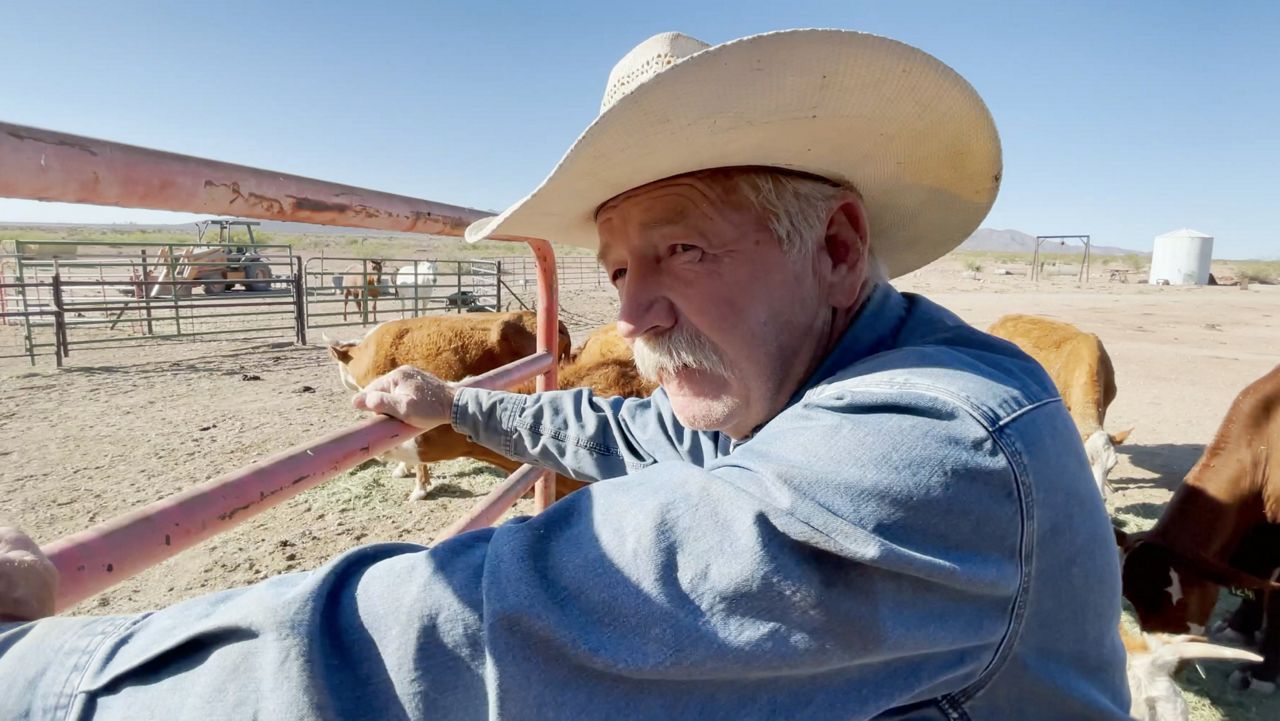 BISBEE, Ariz.— Every morning, John Ladd starts his day not by checking whether his cattle have gotten out, but by making sure no one has gotten in.

“When I pull up to the barn, I look inside there. When I go around to get hay and feed the horses, I look under the trailer,” Ladd said. “I look in here to see if anyone is here.”

Over the years, Ladd had his fences cut, his horses stolen and his house broken into more times than he cares to remember. He’s even mourned the loss of a fellow rancher who was gunned down and killed.

“It shouldn’t have to be that way,” he said.

A fourth-generation rancher, Ladd has lived here in the Arizona outback his entire life — a vast dusty corner of the world where people still wave at cars as they drive by.

“The ranch has given us a good livelihood, and I respect the land and what it’s done for my family,” Ladd said. “You take care of it, and it will take care of you."

Ladd’s 16,000-acre ranch shares a 10-mile border with Mexico — which wasn’t a problem until the 1990s, when the cartel took over this major corridor for migrants and smugglers.

“The last 30 years have been terrible living this close to the border,” he said. “You’ve got people crossing illegally every day.”

So when former President Donald Trump began building the wall here last year, Ladd not only welcomed it, he even leased some of his land to the contractor for extra storage space.

“They started in April of 2020 and completed most of the wall for about 50 miles at the end of the year, in December,” he said.

Ladd was finally able to sleep at night, as he explained. Restlessness returned on January 20, 2021, when, on his first day in office, President Joe Biden halted all construction.

The effects were almost immediate, Ladd noted. As soon as construction ended, waves of undocumented immigrants flooded his property.

In May, more than 180,034 people were detained along the U.S.-Mexico border, the highest number in at least 20 years. According to the U.S. Customs and Border Patrol, however, illegal immigration on the southern border has been rising steadily for 12 months straight, long before Biden took office.

Ladd knows his ideas are not popular in some parts of Washington D.C., where the wall has been criticized for dividing communities along the border and being largely ineffective. He believes the wall was never intended to stop immigration but slow down smugglers just long enough for Border Patrol agents to apprehend them.

Steve Ray is a security guard on the wall’s construction site and a former police officer who spent 17 years patrolling the border. He says the wall has helped, but it's not enough; what’s needed now is more technology and more boots on the ground.

Ray explained how the cartel has gotten smarter, smuggling people in smaller groups in an effort to overwhelm Border Patrol agents.

"It’s tough, actually, because you’re only one person," he said. "You can only be in one spot at a time."

Ladd said he has no idea what will happen to the wall, but if life along the border has taught him anything, it’s that things will always turn around.