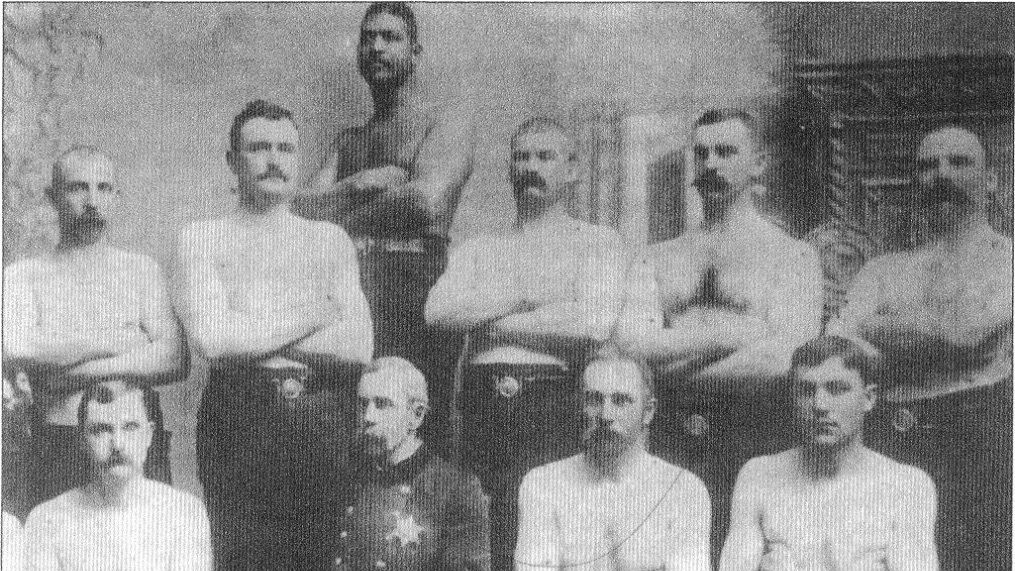 A movie is in the works about Robert Stewart, seen head and shoulders above his LAPD colleagues. (Photo courtesy John Thomas)

EDITOR'S NOTE: Digital journalist David Mendez and anchor/multimedia journalist Kate Cagle have been following the story of Robert Stewart as a collaboration. Click the arrow above to watch the video.

Two young filmmakers, spurred by the Los Angeles Police Museum, are working to bring Robert Stewart's life to the screen. Stewart was the first Black police officer in Los Angeles Police Department history, and recent attention to his life — brought by historians and reporting from Spectrum News 1 — has renewed interest.

When Kei'shawn Blackstone learned Stewart's story, he was entranced.

"Given that he went through so much adversity and came out still standing, it's a light of hope that people need to see in today's society," he said.

Police Museum staff contacted Blackstone late last year, asking if he might be interested in making a film based on Stewart's life.

The project was originally viewed as a short piece, said LAPD Sgt. Bob Alinez, who chairs the museum's board of directors. It was borne of an LAPD proposal to include information about historical events and important people for the department's officers. It soon evolved as they considered the scope of Stewart's life.

Although Stewart is recognized as the first Black police officer in Los Angeles's history, his story isn't a wholly happy one. He was born enslaved in Kentucky in 1850, and upon the abolition of slavery, he migrated across the country. By 1889, he broke ground as one of two Black men — alongside Joseph Green — to be appointed police officers.

Although Green was laid off little more than a year into his service, Stewart remained for about 10 years, with a brief break to run for public office. He was lauded in the press for his arrests and strapping stature, but his career came to an ignominious end when he was accused of rape by a white teenager. Although he was eventually acquitted, he was stripped of his badge without due process.

Stewart spent the rest of his life as a janitor and laborer. Stewart died in 1931 at 81 years old. Although Black community newspapers like the California Eagle took care to honor his memory, he was largely forgotten by mainstream Los Angeles press. For years, LAPD misremembered its own history, stating an incorrect hiring date for Stewart, and did not explain the circumstances behind his removal.

Last September, LAPD Chief Michel Moore promised to rectify that, telling Spectrum News 1 that the department will reinstate Stewart before giving him an honorable retirement.

Right now, the department is in the process of getting new castings of his badge made; in the meantime, the department and the history museum are planning other honors for Stewart, including possible restoration of his gravesite.

The movie, Alaniz caution, is still in its infancy. He's talked to production companies, and he's aware that Blackstone has also sought out production assistance. Alaniz expects that the museum will be able to throw its weight behind the project by March, after further partnerships have been established.

Securing funding is just part of the work, Blackstone said. He and his writing partner, Sam Jordan Dudeck, are working on their next draft of the script for the Stewart film, currently titled "A Giant in Blue."

"It's rare when you have a story that you get where the research is just as interesting, or even more than, the script itself," Dudeck said. "The thing that I love about this project is how closely it relates to what we're going through today…the changes we need in our judicial system and policing system and race relations across the country."

Dudeck acknowledges that he, as a white man in his mid-20s, will not be able to truly understand what people of color have gone through in this country.

"It's fortunate that it allows us to shed light on the mistakes we've made throughout our history," Dudeck said.

Blackstone said he feels that he, as a Black man from South Los Angeles, was called by the universe to work on this project.

"He found that hope in his heart, even with the negative culture around him. It stuck with him, made him that person. I think that's what made me connect with the story: I still stood," Blackstone said.

"I want people to know that I hear you, that this project is to help. It may be a grief-filled, long, hard story, but at the end of the day, this is to show you that things like this happened and that you can't run away from it," Blackstone said.