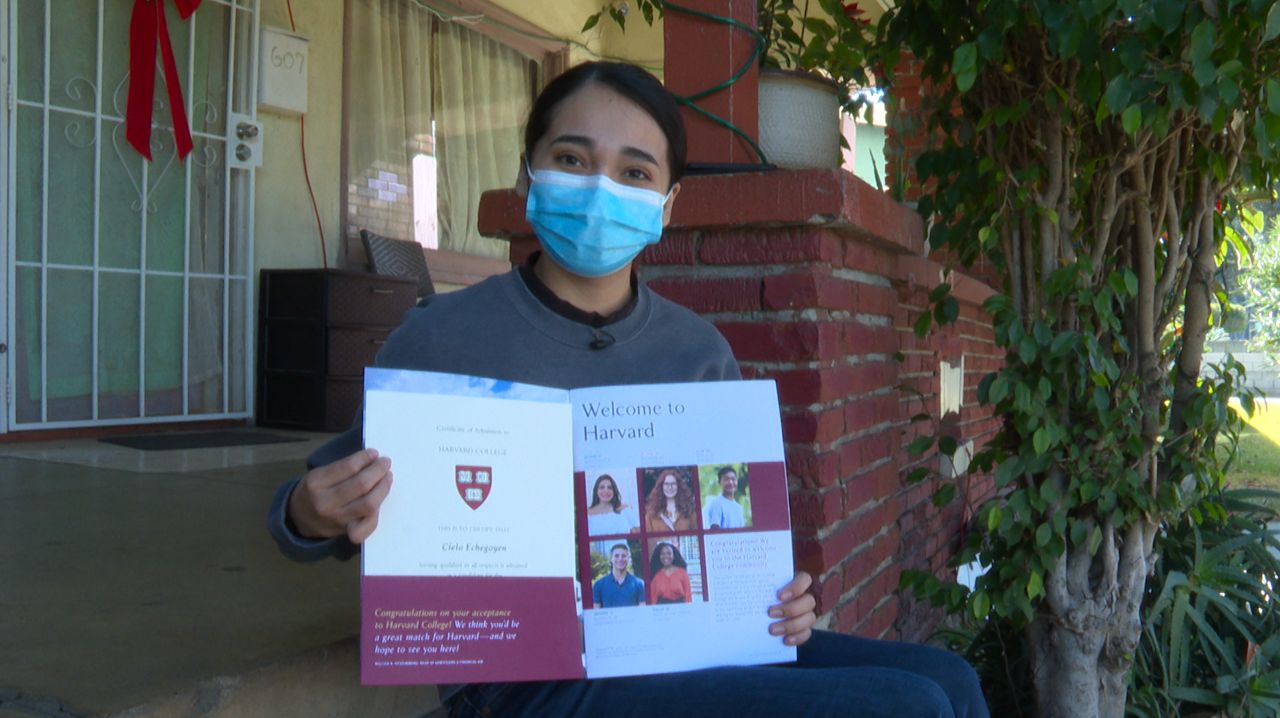 SANTA ANA, Calif. — The video which shows 17-year-old Cielo Echegoyen and her family huddling around her laptop in a moment of suspense has gone viral.

The Santa Ana High School student is going to Harvard University in the fall. Her parents named her "Cielo," which means sky in Spanish, something Echegoyen has been reaching for. However, in moments like this, it is her parents who keep her grounded.

"They've done everything possible to make sure my siblings and I have a better life," she said.

Echegoyen is one of six children born to immigrant parents. Over the years, her parents have juggled multiple jobs and worked long hours but always made time to support their education despite not graduating from high school themselves.

"My mom would drive me to the public library, where I stayed until night time. Then she'd pick me up, take me back home, and it was the same routine every single day," Echegoyen said.

Last year, Echegoyen's dad was detained by ICE for about six months.

"When I visited my dad at the detention center where he was being held, he'd always remind me that I had to stay focused because I was a junior and I was about to be applying to schools in the upcoming months," she said.

Echegoyen said she continued to focus on school, using her education to distract her from her family's pain.

"When I was growing up, one of my friends when I shared my dream of going to Harvard, their reaction was, 'Mexican girls don't go to Harvard.' The reason why she said that wasn't to be mean; she herself was Mexican. That was our reality. We had nobody to look to," Montiel said.

"Cielo gives me hope. It's a hope that he instilled in me that I now get to share with others," Montiel said. Echegoyen and her mentor's lives are similar in many ways. Montiel was an undocumented youth during a time when the Deferred Action for Childhood Arrivals program, or DACA, did not exist.

"Systems are hard to change, but you can just inspire hope in people and really support them to go through their own journey. You can keep the doors open so they can come follow you. I think that's the biggest impact that one can have on somebody else's life," Montiel said.

Since graduating from Harvard, Montiel has become an adjunct professor at Claremont Graduate University. She became an inaugural instructor for the first certificate program in the nation to train researchers and educators on how to work with undocumented populations.

Echegoyen is hoping to graduate from Harvard University and return as an oncologist. She wants to find a cure for cancer and open clinics in her parents' respective home countries.

"If my Harvard classmates grew up in a situation where they didn't really know undocumented people, to be that representation to show them that we can be smart, we can be kind, caring people and the narrative that the media paints isn't always true. I'm very honored to have that role," Echegoyen said.

Her three oldest siblings are all either college graduates or still attending college.