Hundreds of cyclists gathered for a 25 mile Ride for Black Lives between La Brea Avenue and the Venice Boardwalk on Sunday, Aug. 16 (Spectrum News/David Mendez)

Thankfully, it was still early enough in the day that car travel was light. Even then, the few cars that were passing through had to slowly squeeze by.

More than 500 cyclists participated in the biggest ride yet in the burgeoning, three-month-old movement of Los Angeles’s Ride for Black Lives, a group dedicated to twice-weekly peace and unity bicycle rides. On Sunday, the group was using its growing name to boost another growing organization for the first time, benefitting the Summaeverythang Community Center being grown by South Central-based artist Lauren Halsey.

“We started as a bike ride just to push the message of Black lives mattering, and we started to see that people really resonated with it,” said Ron Holden, who co-founded the group. “This is one of our first attempts to physically become accessible in the community, where we’re raising money for a cause that directly affects humans in our society. So for us, it’s a big deal.”

Ride for Black Lives was born during the COVID pandemic, and not long after Black Lives Matters marches caught the attention of the county. The first ride gathered outside of Burgers 99, Chef Geovanny Delgado’s La Brea burger shop which is owned in partnership with Brick Stowell and brothers Arjun and Nakul Mahendro.

“Burgers 99 was always supposed to be all about community," Delgado said. "We wanted to sponsor the local soccer teams, we were about to start a BMX bike club. We wanted to make our footprint here, but also leave something positive to the city that I grew up in."

When the pandemic hit, his restaurant was turned on its head, like so many others. When the protests against police brutality began, Delgado wasn’t sure what to do. 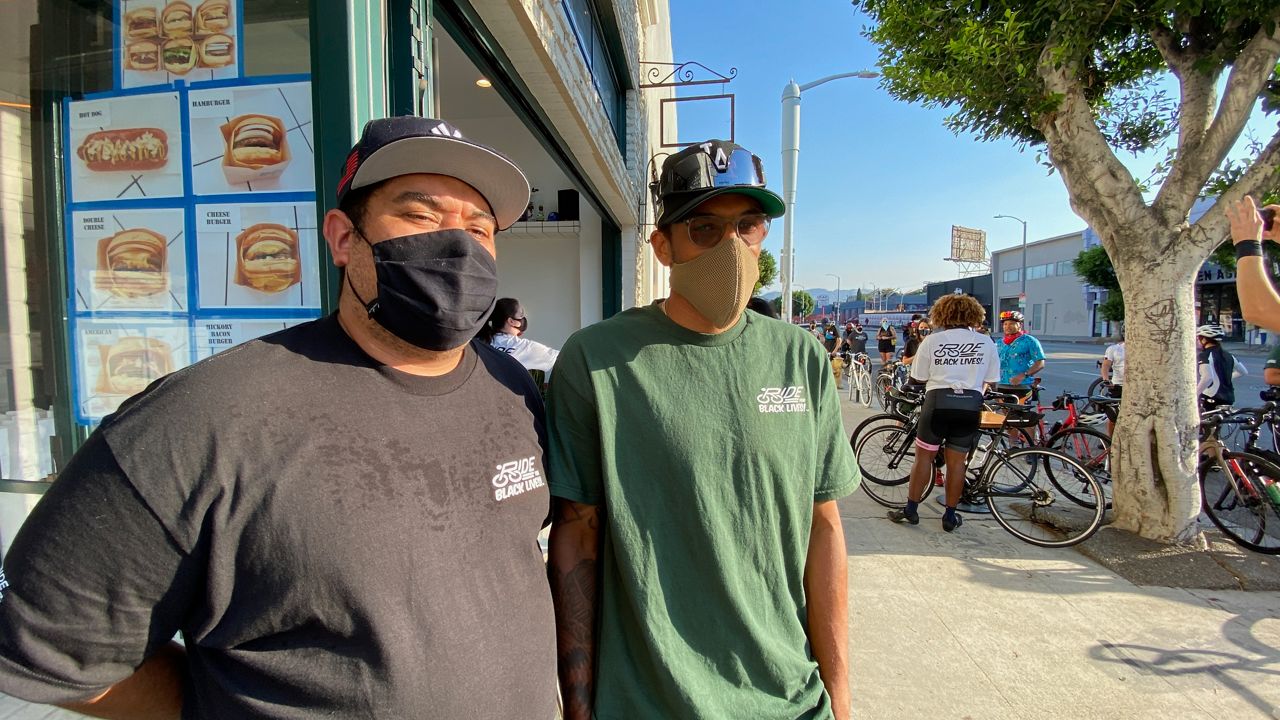 “I didn’t know how to be part of the change. Of course, there was always donations to certain organizations, but I felt like we needed to do something,” Delgado said. “There was just not knowing how to start, then realizing that if you put time and emotion behind something, something greater will come out of it.”

Delgado and Holden met this spring through a mutual friend. By June, the two partnered to host the rides outside of Burgers 99 and throughout the city — often to the Venice Boardwalk and back.

“We expected 20 people on that first ride. And then, when we saw that we had 200 people here that were all for the common cause, it was great,” Delgado said.

Since those first rides in early June, Delgado said that each of the Rides for Black Lives events have had between 100 and 200 riders participating. As the rides have grown, so has RFBL’s visibility – Holden was recently interviewed on TNT’s Inside the NBA, which garnered loads of attention for Sunday’s ride.

RFBL’s fundraising T-shirts, printed by the south Robertson-area customization shop Product of L.A., were being handed out in the restaurant’s burger bags. Practically everyone was wearing a face mask upon arrival. Plus, in looking out for everyone, Holden made sure to remind the riders to mask up as they prepared to leave at 8:30.

Yesterday was amazing, we hope you left as fulfilled and inspired as we did. Thank you, every single person we appreciate you. A peaceful ride with a peaceful message of love and unity. We keep the conversation going and participate in this community together. ✌🏽🚲❤️✊🏽#rideforblacklives

While a good portion of the group was clad in cyclist-standard spandex and snug bike shorts on specialized bikes, many other folks were riding just as they would on any other day. A few others wore shirts demanding equal rights for all, while others, like Elliott Serjeant, had signs mounted to their bike frames.

Serjeant explained that he recently moved to the United States from New Zealand, and that until recently, “the cycling community felt like just white men in Lycra. And I think the thing I appreciate most about L.A. is that it’s really diverse. As you can see by this crowd, the community here is about riding what you like and what suits you,” he said.

He wanted to find a way to support that diversity, to support the community asking for structural change and equality.


“It’s about the unity, right?" said Ken Kirkpatrick, who came up from Orange County for the day’s ride. "In order for us to get anything accomplished, we have to come together and work together, before anything actually happens. I think having something like this where you invite everybody and include everyone and get them focused on one common goal, that’s the key.”

Kirkpatrick learned about Rides For Black Lives through Holden’s TNT interview, which Holden said came as a result of word spreading the word through friends and social media.

“That goes back to the idea of us cultivating our community, because our community starts to provide these situations and posts things together,” Holden said.

Sunday's ride proved the value of the community working for itself and each other. Beyond Product of L.A., Holden and Delgado credited Kong Fit Club and Venice shoe store Sneakersnstuff for hosting the mid-ride hydration site, and One Brands for donating a dollar for every collective mile cycled – up to $2,000 – to benefit Summaeverythang.

“I feel like, when we all get together, we can make a bigger impact,” Delgado said.