Living Out is a new independent living retirement community for LGBTQ+ seniors in Palm Springs. (Courtesy of KOAR International)

PALM SPRINGS, Calif. — It’s often difficult for seniors to find a retirement community that truly feels like home, but the challenge is especially acute for older lesbian, bisexual, transgender and queer individuals. Almost half of senior LGBTQ+ couples said they have been mistreated looking for housing, according to the nonprofit Equal Rights Center. About a third fear the need to re-closet themselves during retirement.

“There are virtually no places where LGBTQ people can retire in complete comfort, safety and a sense of community,” said Loren Ostrow, CEO of KOAR International. The developer recently broke ground on a new apartment community for LGBTQ+ seniors in Palm Springs. Called Living Out, it is the first LGBTQ+ development from KOAR, and one of a growing number of independent living communities for lesbian, gay, bisexual and transgender retirees around the country.

With the number of retiring Americans expected to double in the next ten years as Baby Boomers leave the workforce, and with more than 2 million LGBTQ+ seniors joining their ranks by 2060, Ostrow sees Living Out as a solution.

“You unfortunately hear stories about people going into mainstream properties, and they hide their photographs that show their life as an LGBTQ person,” he said. “They are not treated well by the people who work there. They are not treated well by other residents. I want to change that so there are other opportunities for LGBTQ people to retire in a community of like-minded people.”

Ostrow, who is 70, was a commercial real estate attorney turned real estate developer who is also gay. Besides building hotels and casinos around the country, he has served on the board of the LGBTQ Center in Hollywood since 1993. He was also on the board of the National Gay and Lesbian Task Force, which operated a think tank that looked at the needs of LGBTQ seniors in the early 2000s. The idea for Living Out, he said, has been in the works for 25 years. 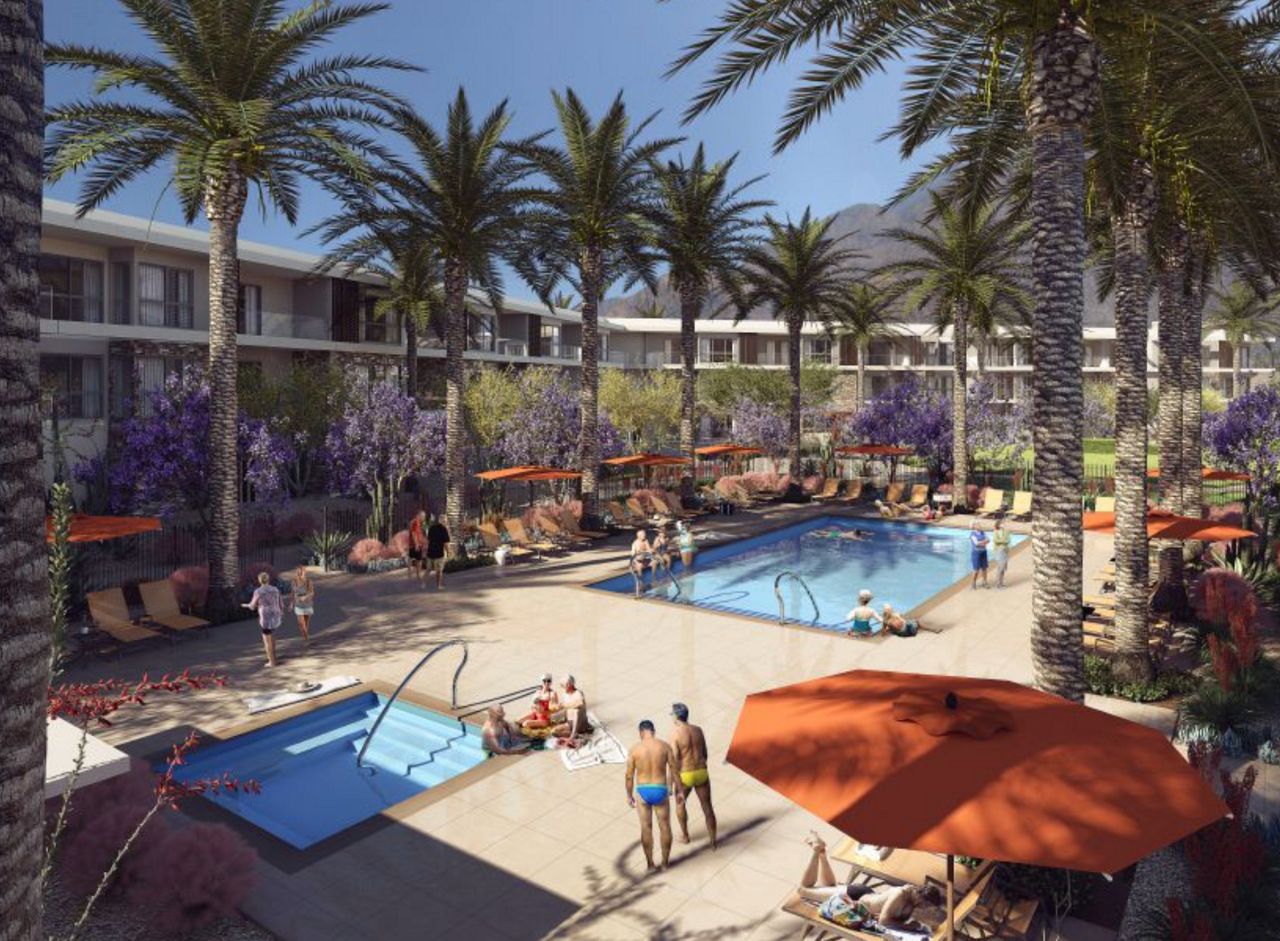 “You often hear LGBTQ people saying that when we get older, we’ll live in a communal home and take care of each other,” Ostrow said, adding that those in the community oftentimes do not have family they can turn to as they get older because their sexual orientation has estranged them. “In a sense, what I’m doing is just a larger-scale, more professional version.”

“I have always believed that food brings people together,” Feniger told Spectrum News 1. “Through food, we connect and create community. Living Out Palm Springs is creating a community for LGBTQ seniors as we enter the next chapter of our lives. I want to share my lifelong passion for food and provide the best dining experience with the residents and visitors of Living Out.” 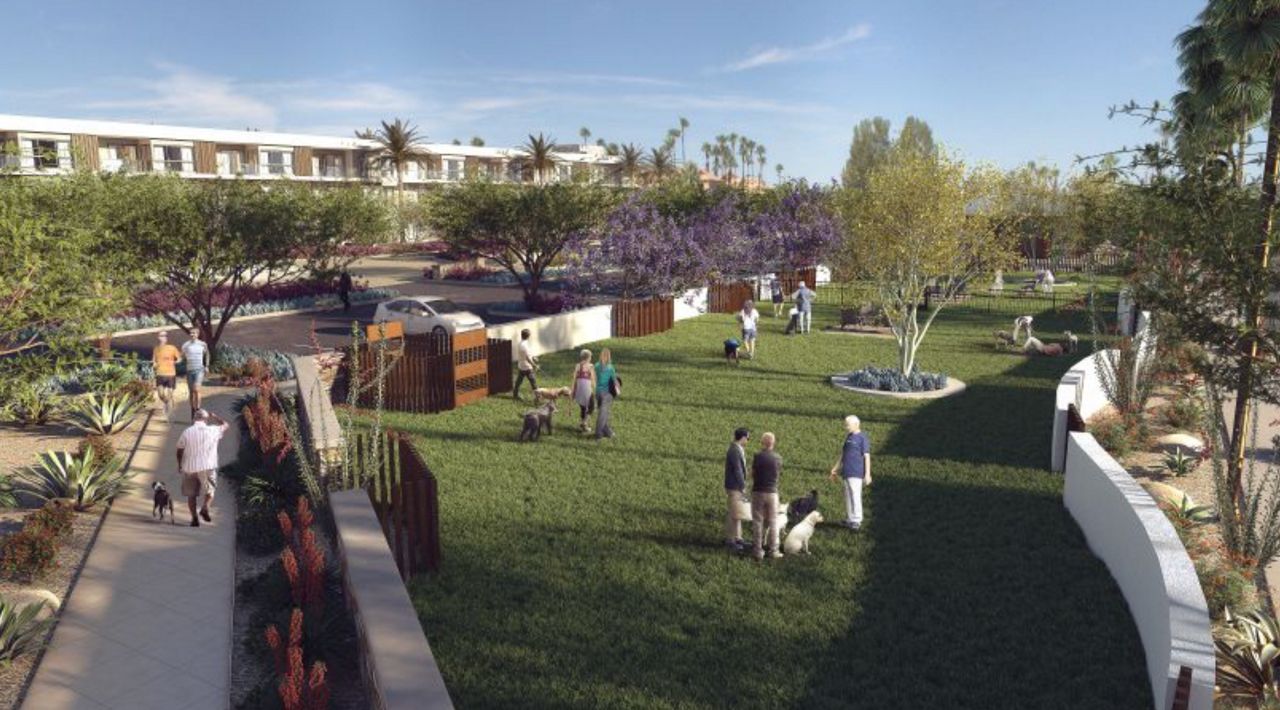 The grounds will have covered parking for all residents, a swimming pool, three jacuzzi areas, bocce ball courts, a putting green, walking paths and a pet park with an adjacent pet care facility for grooming, day care and boarding.

“As a former physical educator and coach who lives an active life, having access to activities that allow me to be part of a community is very valuable for me,” said Wendy Marks, a New York City resident who has put down a $1,000 deposit to reserve a Living Out apartment. About half of the property’s units have been reserved so far. “Being from New York City, having an option to live in one of my favorite sun-drenched cities and be part of this active, safe and vibrant environment is the experience I am looking for as I plan my next adventure.”

The nine-acre property will house luxury apartments in four different configurations, from one-bedrooms measuring 1,100 square feet to two-bedroom units with 1,400 to 1,700 square feet of space. Each apartment will have a balcony or patio and a den. The units will be rented, not sold, with monthly leases ranging from $4,500 to almost $8,000, which Ostrow says is competitive with other properties in the greater desert area. 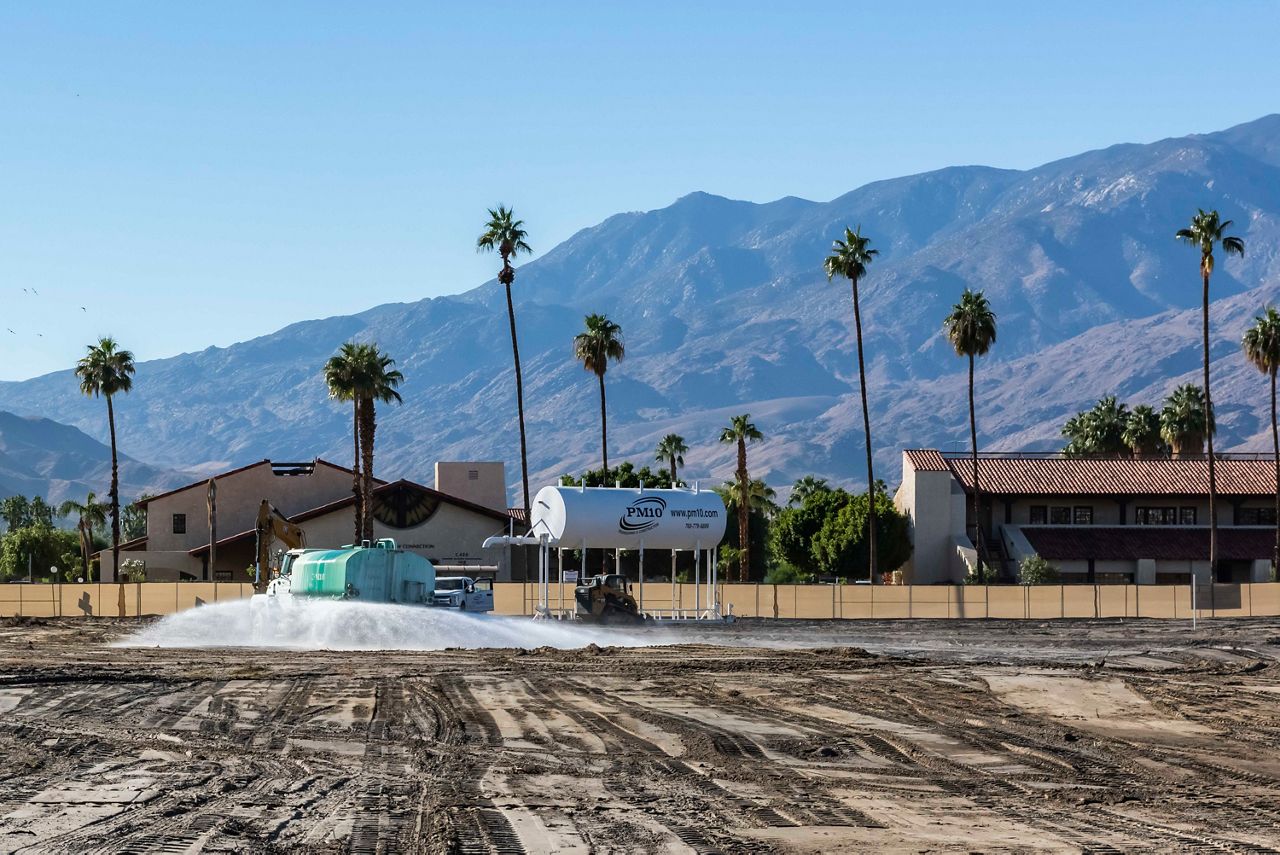 Ostrow said he chose Palm Springs because it is already a comfortable environment for gay retirees. While the desert city 100 miles east of LA has long been known for its embrace of the LGBTQ+ community and its senior population, he believes there is still a need for a place like Living Out, with all of its amenities and services and a built-in community of folks nearby who’ve lived similar experiences.

“As you get older, no matter where you are, you tend to become more isolated in your home. It’s just the way of the world that people don’t come to you that often. They don’t go out as much and interact, so you still have that sadness of isolation even in a community like Palm Springs,” he said.

To entice people out of their living units, a daily continental breakfast is served in the lounge and included in the rent.

“I’m hoping people will come down and meet other residents and become friends, and then they’ll go out and play bocce ball or go to the putting green or take walks around the beautiful gardens or go to the pool,” he said.

He’s also hoping people who don’t live at the property will come to Living Out for dinner at Feniger’s on-site restaurant, creating more opportunities for connection. Variety, after all, is the spice of life. It just gets harder to pull off as one ages. Living Out is an attempt to bridge that void. Currently under construction, the LGBTQ+ apartment community is expected to open next spring.