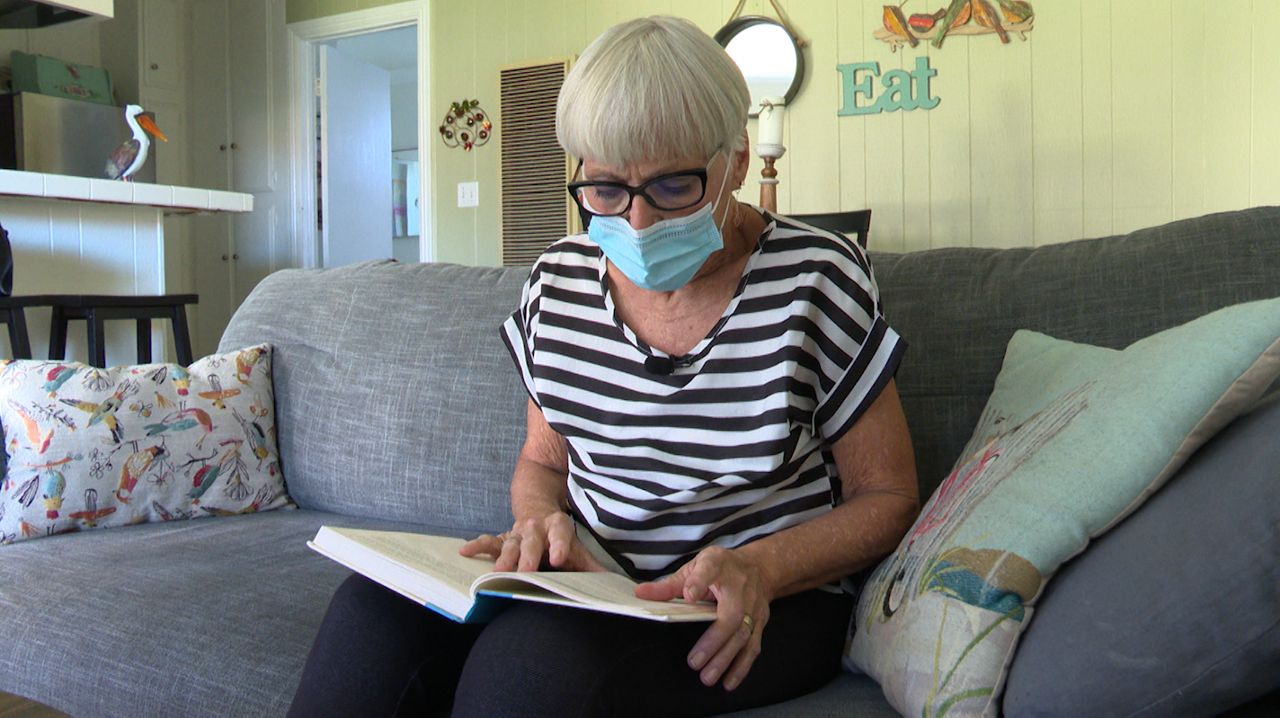 TUSTIN, Calif. — When the going gets tough, Stephanie Rohlfing turns to her books to feel safe.

“I have found so much peace within myself from the words I’ve read,” Rohlfing said.

Rohlfing is a 67-year-old grandmother. She was diagnosed with thyroid issues as a teenager and has continued battling several health conditions throughout her adulthood. Her illnesses makes her vulnerable to the coronavirus. Fortunately, Rohlfing now has a home to live in.

“This place just gives me security and safety. It has allowed me to tell my kids not to worry and that I am fine. They believe me now, but the last few years was always questionable,” says Rohlfing, a Tustin resident.

Just under two years ago, Rohlfing didn’t have a roof over her head.

“In the summer of 2014, my husband lost his job, we lost the apartment and he and I subsequently separated,” said Rohlfing.

All this happened while Rohlfing endured chronic health conditions, landing her in the hospital. At one point, Rohlfing stayed at a homeless shelter in Fullerton.

“You’re sleeping on the floor with 200 strangers and it can be violent at times depending on the mental condition and drug condition of some people,” said Rohlfing.

That chapter eventually took a turn. Rohlfing got connected to a nonprofit which introduced her to an organization called Orange County United Way which helped her find housing with section 8 rental assistance. Section 8 is a federal government program that assists very low-income families, the elderly and the disabled so they can afford housing.

“It was like an answer to a prayer when I got the call,” said Rohlfing.

Applicants can sometimes wait for years before they receive section 8 housing. Once they receive a voucher, they have to use it within a certain amount of time before it expires and requires a new application.

With finding affordable housing being difficult as it is, Orange County United Way developed a program almost three years ago called WelcomeHomeOC. It’s a landlord incentive program that provides financial incentives such as double security deposits, sign-on bonus, holding fees, and other assurances for property owners who rent units in Orange County to individuals, veterans, and families with a housing voucher.

The program is a joint effort between the United to End Homelessness initiative, Orange County United Way, Public Housing Authorities and rental property owners to reduce the time involved in the search for housing by increasing the availability of rental units.

“We have achieved great success since the launch of WelcomeHomeOC about a year and half ago. We’ve housed more than 250 people in 164 households since the launch of the program and after 12 months, 93% of our program participants remain permanently housed. Our priority during the rest of 2020 and through 2021 is to continue housing people and helping them remain housed. Next year we look forward to continuing our efforts to house veterans, and are looking into ways to advance our work housing former foster youth. We can’t state it strongly enough: everyone has the right to a safe and stable home,” said Becks Heyhoe, executive director, United to End Homelessness OC United Way.

Rohlfing says she wants to share her story in the hopes more property owners will join the WelcomeHomeOC network. She says she understands some section 8 voucher holders are stereotyped, but she says she and many others are people who just need help to get back on their feet.

“When I come up the walk, I get a smile on my face. Not only is it pretty outside, I feel like it’s pretty inside,” she said.

Thanks to the Orange County United Way’s program, Rohlfing says she’s living one of her best chapters in her own home.

This wouldn't be possible without our Champions...
THANK YOU Kaiser Permanente Orange County!#EndHomelessnessOC #DoingMore4OChttps://t.co/8jGpDhGX0S pic.twitter.com/t4td3gNfVw