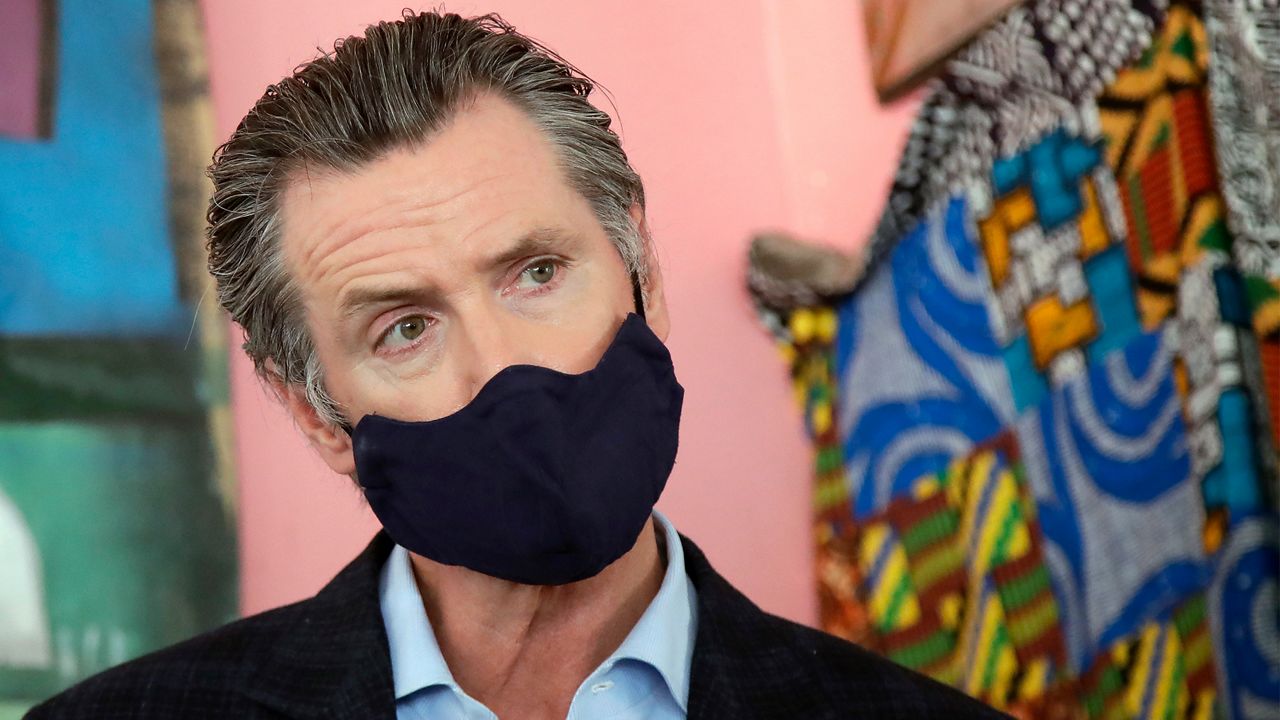 In this June 9, 2020, file photo, California Gov. Gavin Newsom wears a protective mask on his face while speaking to reporters at Miss Ollie's restaurant during the coronavirus outbreak in Oakland, Calif. (AP Photo/Jeff Chiu, Pool, File)

SACRAMENTO, Calif. (AP) — Californians who haven’t paid their rent since March 1 because of the coronavirus can stay in their homes through at least Jan. 31 under a new state law Gov. Gavin Newsom signed late Monday — one day before statewide eviction protections are set to expire.

The pandemic has devastated California’s economy, causing millions of people to lose their jobs as the government ordered businesses to close for months to slow the spread of the disease. In April, the Judicial Council of California — the rule-making authority for the state’s court system — halted most eviction and foreclosure proceedings during the pandemic.

But those protections end on Wednesday, meaning landlords could resume eviction proceedings on tenants who haven’t paid their rent.

Monday — the final day of the legislative session — state lawmakers approved a bill that would ban evictions for tenants who did not pay their rent between March 1 and Aug. 31 because of the pandemic. The bill would also ban evictions for those same tenants through Jan. 31, but only if the tenants pay at least 25% of the rent owed during that time.

Newsom signed the bill about an hour after lawmakers passed it. In a news release, Newsom called the law “a bridge to a more permanent solution” from the federal government.

Renters need protection from evictions when they can’t pay rent due to #COVID19.

Property owners need help to avoid foreclosure.#AB3088 will do both--but is a temporary solution to a more permanent problem.

The federal government must step up and help. https://t.co/dqRKbaoUfO

“We need a real, federal commitment of significant new funding to assist struggling tenants and homeowners in California and across the nation,” Newsom said.

The legislation does not forgive the missed payments. Tenants will still owe the money. Landlords can ask a judge to order the tenant to pay it back, but they can’t ask a judge for an eviction solely for not paying rent in full.

Tenants would have to sign a document, under penalty of perjury, that says they have experienced a financial hardship directly related to COVID-19. Wealthy tenants — defined as earning a salary of at least $100,000 or 130% of the area’s median income, whichever is higher — would have to show proof that they cannot pay.

The bill does not halt foreclosures for landlords whose tenants have stopped paying rent, but it does extend some state protections to rental properties of four units or less — protections previously only available to owner-occupied homes.

“It’s often said a sign of compromise is both side are dissatisfied, and that’s certainly true here,” Assemblyman David Chiu said, a Democrat from San Francisco and author of the bill. “This bill is an imperfect and necessary solution to an enormous crisis.”

Patricia Mendoza lives in Imperial Beach with her two children. She said she lost her job in April and has had trouble paying her rent ever since. Her asthma puts her more at risk for the coronavirus, making it difficult for her to find a job. She said she doesn’t think she’ll be able to afford 25% of her $1,500 per month rent over the next five months to qualify for eviction protection.

“This is not my fault. I’m a hard-working mom. I’ve never asked for help,” said Mendoza, who has been advocating for eviction protections as part of the Alliance of Californians for Community Empowerment. “I’ve never thought of myself as being poor. We’re not rich. I”m a working mom, we’re not poor. Now I see myself as: We’re poor.”

Ron Kingston, a lobbyist representing multiple landlord groups, said the bill is flawed because it does not require most tenants to verify they have suffered a financial hardship because of the coronavirus. He said the pandemic has been hard on landlords, too, many of whom could go more than a year without receiving any rent payments.

“That creates a really difficult situation,” he said.

Chiu said the bill is the best lawmakers could do while mustering the two-thirds vote needed to make the bill take effect immediately upon the governor’s signature. He has pledged to work on the issue again when lawmakers return to work in January.

Republican Sen. Andreas Borgeas of Fresno, who voted for the bill, said that when lawmakers return next year, they should consider approving a tax credit for landlords who were paid just 25% of the rent they were owed. A similar proposal introduced earlier this year failed to pass the state Assembly.