Strip Malls, Big-Box Stores Could be Used for Housing in LA

But there could be an upside.

“With the crush of need that we have in terms of affordable housing, converting some of that space could be extremely advantageous,” U.S. Housing and Urban Development Secretary Ben Carson told Spectrum News 1.

Over the summer, Carson announced that HUD was exploring ways to turn vacant commercial space into affordable housing. He estimated that at least five to 10 percent of existing commercial real estate could be converted into residences.

“It’s very wise because we already have in some places a lot of density, and we don’t have to increase it," Carson said. "We can leave the density where it is and create affordable housing. The building is already there.”

So-called adaptive reuse has been happening in Los Angeles since 1999, when the city enacted an ordinance that allowed vacant banks and other historic buildings downtown to be converted into housing. But with more consumers shifting their shopping from brick-and-mortar to online stores, and many workers now telecommuting, the city plans to earmark more types of buildings for residential conversions.

It couldn’t be happening at a better time. Nationally, about 25,000 stores could close this year because of the pandemic, according to the retail analytics firm Coresight Research. That’s coinciding with a growing need for more affordable housing. The Southern California Association of Nonprofit Housing estimates there is a current shortage of 551,807 rental homes for households earning less than $41,500 in L.A. County.

“All the buildings that are readily convertible, they’ve already been converted,” said Craig Weber, principal planner for the L.A. City Planning department.

Earlier this month, City Planning unveiled its Downtown Community Plan to expand adaptive reuse to warehouses, manufacturing facilities, parking lots, and other types of under-utilized buildings downtown as part of its first application of new zoning rules designed to make it easier to build housing.

“Any place where there are older, larger-scale commercial buildings within the city are viable candidates for repurposing into residential structures,” Weber said, citing Hollywood, Westwood, and Wilshire Center as examples.

Smaller commercial strips and vacant big box shops could also be candidates in the future, Weber said, though the economic viability of such conversions is unclear.

“The reality we’re in right now is that zoning, and transit-oriented communities programs in particular, offer substantial incentives to demolish these under-utilized commercial strips and build much larger buildings with affordable housing that has ground-floor amenities like retail,” Weber said.

But a handful of local architects are imagining alternatives that would preserve a neighborhood’s character by keeping existing retail buildings intact and repurposing them as living space.

“We’ve been looking at how the pandemic is going to change the world and change design and the work that we do and our city,” said Karin Liljegren, principal and founder of the architectural firm, Omgivning. Her firm specializes in adaptive reuse projects in and around downtown, and recently developed several case studies for repurposing strip malls, big box stores, and light industrial buildings into housing in different parts of L.A. 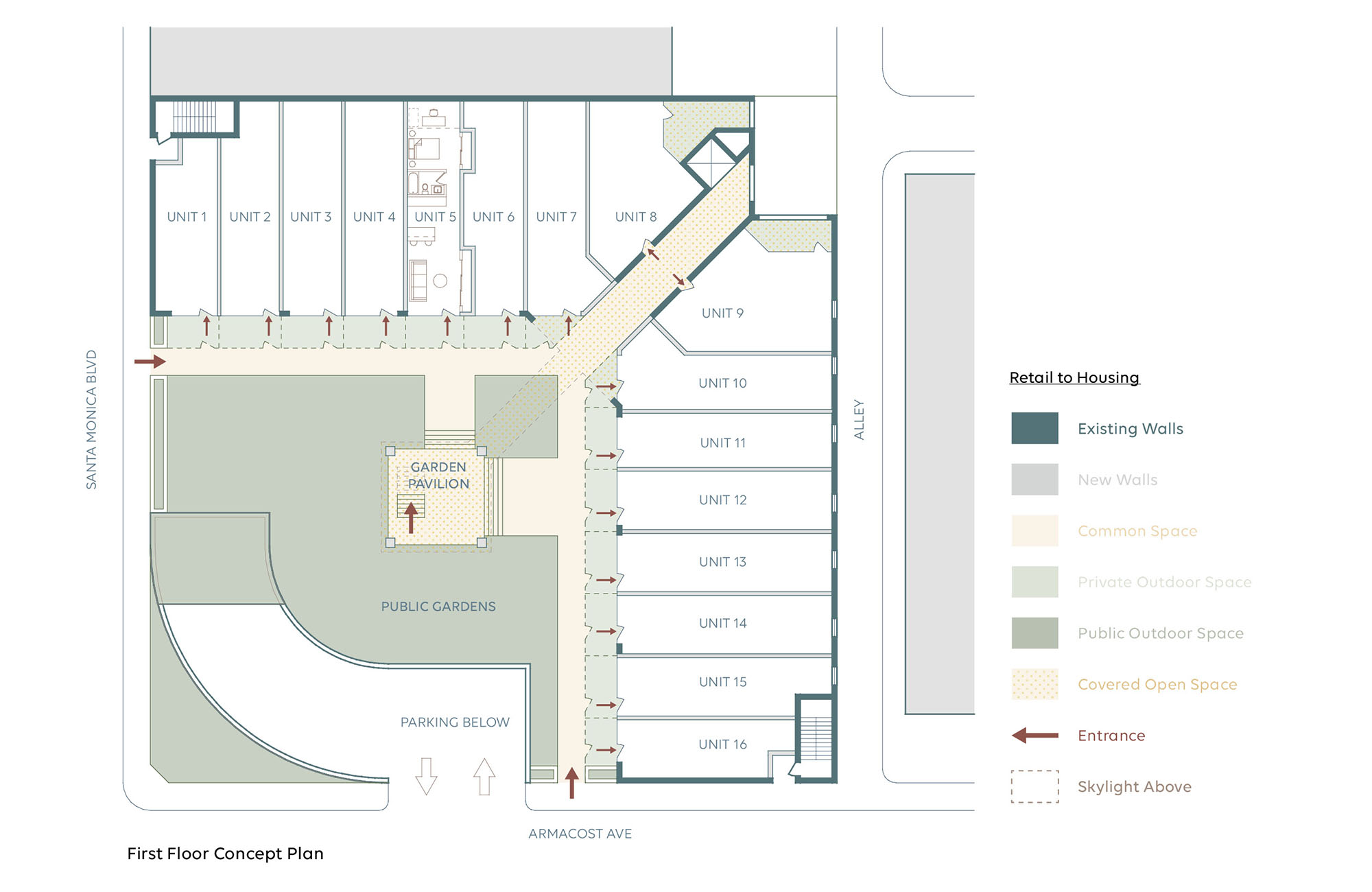 Her case study of an L-shaped strip mall at the intersection of Santa Monica Blvd. and Armacost Ave., for example, converts each retail space into two, 600-square-foot living units. Each unit has a glass window that looks out into a communal greenspace that replaces what would normally be the parking lot. The back of each living space has its own patio.

Los Angeles is home to 675 mini malls, taking up 24 million square feet of space, according to a recent L.A. Conservancy report. While those malls are becoming increasingly vacant with the economic downturn accelerating small business closures, they present a great opportunity for residential conversions, Liljegren said. “They’re on commercial corridors, they’re close to transit, they’re right there on bike lanes, but they can be these great mini communities now.” 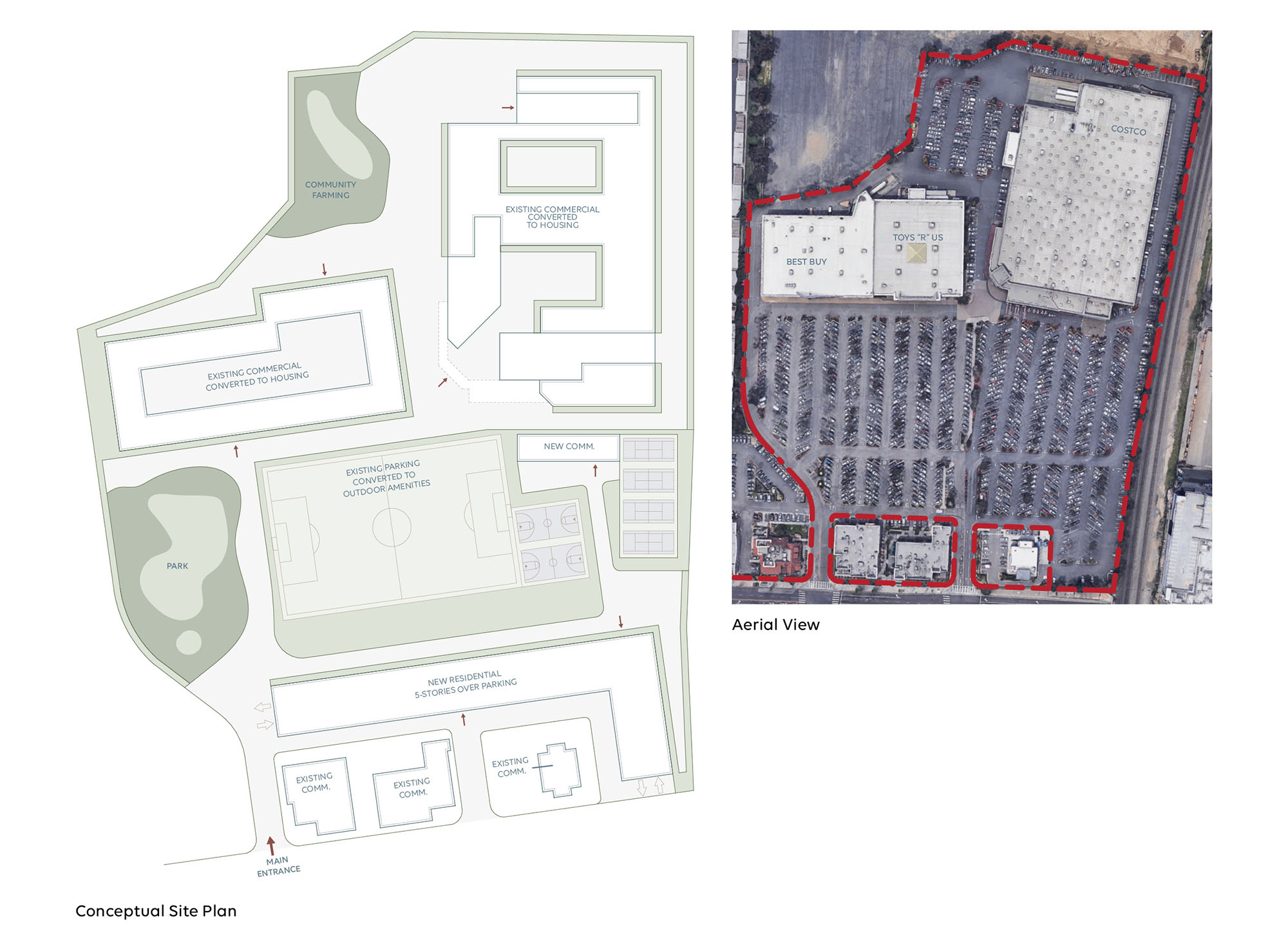 Big box stores could have even more potential for retail conversion, especially for multifamily units, because of their size and associated parking lots, she said. When Toys "R" Us went bankrupt in 2018, it closed 800 locations, including a store in Atwater Village that Liljegren used for another case study.

That particular store is next to a Best Buy and across a small driveway from a Costco, all of which were converted into a micro community with its own park, restaurants, and grocery store. The main parking lot is repurposed for outdoor activities, while one of the main buildings is transformed into two-story townhomes.

“There’s so much land,” Liljegren said. “You can densify one area and make the rest park-like.”

Moving up in size are shopping malls, which occupy 400,000 to 800,000 square feet of space, according to the International Council of Shopping Centers. That’s enough square footage to accommodate between 750 and 1,500 living units per mall at the national average of 526 square feet of apartment space per person, according RentCafe.com.

More U.S. malls are likely to be converted in the coming years. For 30 years, mall sales were declining to the point where “by the time the pandemic comes along, department stores are almost a rounding error in retail sales of America,” said Nick Egelanian, president of the retail consultancy SiteWorks in Annapolis, Maryland.

Before the pandemic, shopping malls accounted for about 15 percent of the 29,000 retail stores in L.A. County, according to the U.S. Census Bureau. But that number is likely to decrease. Egelanian predicts that just a quarter of big shopping malls will survive over the next several years.

While the future of malls is “bleak,” he said, the land they occupy “is generally very good real estate.”


Located near highway interchanges on enormous pieces of land with utilities, large shopping malls are well situated for housing. Converting them, however, will be challenging, Egelanian said. Malls are complex retail and legal structures with multiple stakeholders owning the real estate and zoning requirements that may restrict their use.

“A lot of these malls will end up being completely scrapped and redeveloped,” Egelanian said. “In any community, they will likely be redeveloped to the use that will make it the most valuable, so if housing is the most demand, that’s probably what it will be,” said Egelanian, who estimated that roughly half of the malls that go out of business could be converted to living units.

“Supply is going to be significant in terms of the amount of big box, retail, and second-tier malls that are going to be vacant in areas that may never return to retail,” said Spencer Levy, chairman of American research for CBRE Group, a commercial real estate services and investment firm. “The question is how do you capture these vacant assets and convert them in a way that makes sense. If you own it, you want to maximize profit.”

“Even if you have an asset that’s the perfect location, it’s very expensive to convert any commercial asset into residential because of the need for bathrooms and kitchens and living areas and safety once somebody is under a roof,” Levy added. “There will be ample supply of vacant retail, but we need to overcome the cost hurdles to convert it to affordable housing.”

Affordable housing tops HUD’s list of greatest problems, Secretary Carson said. “People’s salaries are not keeping up. We’re finding more and more people who are severely distressed in terms of the amount of money that they have to devote to housing.”

Converting retail space to residences works best when federal, state, and local officials design and implement the plan, Carson said. “We’ve been doing this long before this time. It’s just that now there’s the possibility of it really accelerating.”