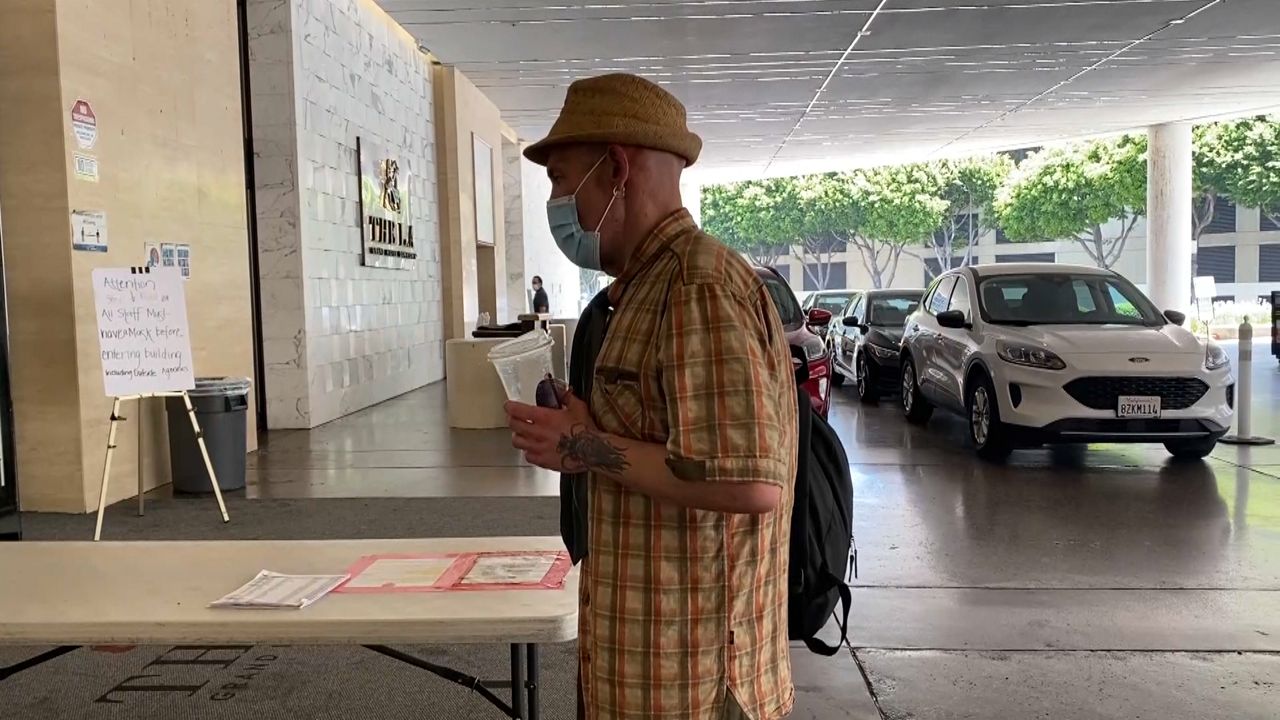 LOS ANGELES — A federal pandemic program that sheltered more than 10,000 unhoused Angelenos over the past two years is set to end Sept. 30, according to Mayor Eric Garcetti’s office and the Los Angeles Homeless Services Authority.

Hotels contracted for Project Roomkey have been steadily closing as the project draws to a close, with some clients already back living on the streets.

On Friday afternoon, participant Daniel Dickerson was trying to figure where he would sleep that night. He had just abandoned his tent after gang members showed up flashing guns at his new encampment.

“I can’t live anywhere,” Dickerson said as he checked to see what he had stored in his backpack. “What an audacity too, think I should be allowed to live somewhere. I guess I should just go die somewhere. That’s what they want.”

Until last week, Dickerson had a room at the Mayfair Hotel. On July 1, 215 were sheltered at the hotel, according to data provided to the mayor’s office by LAHSA. By Friday, there were only two.

Participant Carmella Fitzpatrick was also back on the street, though she was counting her blessings because she still had her RV. She drove to Mar Vista looking for another participant, Scott, whom no one had seen since the Mayfair closed.

A few Roomkey hotels will provide shelter through September. Out of 600 participants at the LA Grand Hotel, one-third have emergency housing vouchers but haven’t found landlords to accept them, according to Councilman Kevin de León’s office.

De León said LAHSA failed to plan for this moment.

“LA cannot afford to go back on the promises made to the PRK participants. My staff and I have doggedly requested a ramp-down plan from LAHSA on multiple occasions and the lack of follow-through has been a huge concern,” he said in a statement to Spectrum News 1.

A spokesperson for LAHSA said they were unable to comment for this story but would provide more information about the end of Project Roomkey this week. In March, the agency reported LA had already spent more than $220 million on the program. The federal government has not reimbursed the city for any of the cost at this point, according to the mayor’s office.

Dickerson was turned away from the LA Grand because the service provider couldn’t verify he’s vaccinated for COVID-19, even though he was recently staying at the Mayfair. It’s nearly impossible to keep track of documents when you’re homeless. Dickerson said he has borderline personality disorder, schizoaffective disorder, obsessive-compulsive disorder and post-traumatic stress.

FEMA funded Roomkey to help cities provide a place to quarantine during the pandemic, but it became a catch-all for the unhoused as city council members increased sweeps and demolished encampments.


In his new book “Homelessness is a Housing Problem,” Gregg Colburn argues there is simply not enough affordable housing to end the homeless crisis in cities like LA.

“We need lots and lots more housing,” Colburn said. “We need housing that’s affordable for people working at minimum wage. We need housing for people with substance use and mental disorders. If we fail to provide those units, we're going to see this unsheltered homelessness crisis in Los Angeles, San Francisco and Seattle continue to flourish. It’s terrible for the people experiencing homelessness, and it’s bad for the community."

While temporary, Roomkey provided clients like Dickerson the security of a locked door in exchange for following rules, including strict curfews and drug searches.

“One of (my) symptoms is, isolation makes me suicidal, almost instantly. So how pleasant do you think it is that Roomkey won’t allow me to have a visitor?” Dickerson said.

To Fitzpatrick, it was a missed opportunity to help people rebuild their lives and regain trust in the system.

“Especially when you’ve been in a bad position you get very depressed,” Fitzpatrick said.

Dickerson is outraged and bitter. His only shred of hope is a single sheet of paper — one of those precious housing vouchers that would subsidize his rent if he could find an affordable apartment in LA.