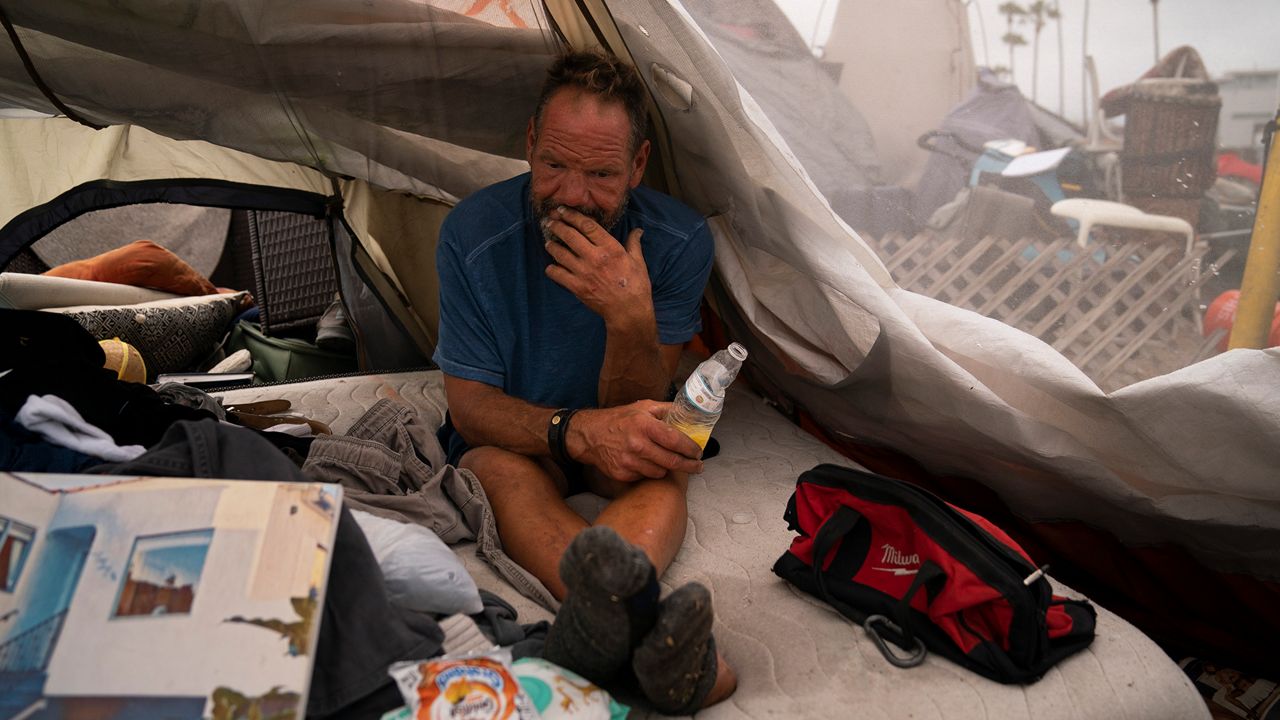 Scott See, 53, passes time in his tent at a homeless encampment set up along the boardwalk in the Venice neighborhood of Los Angeles, Tuesday, June 29, 2021. (AP Photo/Jae C. Hong)

Newsom proposes to force some homeless people into treatment

Multimedia journalist Sarina Sandoval spoke with a street medicine doctor in Venice. Click the arrow above to watch the video.

SACRAMENTO, Calif. (AP) — California's governor proposed a plan Thursday to offer more services to homeless people with severe mental health and addiction disorders even if that means compelling some into care, a move that many advocates of homeless people oppose as a violation of civil rights.


Gov. Gavin Newsom said at a press conference that he has no intention of rounding people up and locking them away. Instead, he said his plan would offer a way for people to get court-ordered psychiatric treatment, medication and housing, preferably before they are arrested.

Under the plan, which requires approval by the Legislature, all counties would have to set up a mental health branch in civil court and provide comprehensive and community-based treatment to those suffering from debilitating psychosis. People need not be homeless to be evaluated by a court.

But if approved, they would be obligated to accept the care or risk criminal charges, if those are pending, and if not, they would be subject to being held in psychiatric programs involuntarily or lengthier conservatorships in which the court appoints a person to make health decisions for someone who cannot.

“There’s no compassion stepping over people in the streets and sidewalks,” Newsom told reporters at a briefing at a mental health treatment facility in San Jose. “We could hold hands, have a candlelight vigil, talk about the way the world should be, or we could take some damn responsibility to implement our ideals, and that’s what we’re doing differently here.”

Newsom, a Democrat and former mayor of San Francisco, has made homelessness and housing a focus of his administration as the number of unsheltered people grow across the country. Last year, the Legislature approved $12 billion for new housing and treatment beds for the homeless and this year Newsom has proposed an additional $2 billion, primarily to shelter people suffering from psychosis, schizophrenia and behavioral health disorders.

It was not immediately clear how much the program might cost, although Newsom proposed in his budget this year more money for mental health services. He has called distressing behavior on the streets heartbreaking and maddening and says residents are right to complain that government is not doing enough.

People with addiction issues or mental health disorders often pinball among various public agencies, namely hospitals, court and jail. There is no one place that manages the person’s health, offering steady and safe housing combined with resource intensive care and California, like the rest of the country, suffers from a shortage of treatment beds.

Newsom's plan could apply to an estimated 7,000 to 12,000 people, said Dr. Mark Ghaly, secretary of the California Health and Human Services Agency.

Compare that to just over 200 people forced into court-ordered treatment last year under Laura's Law, a program for people with severe and persistent mental illness who may pose a risk to themselves or others, he said. The program is optional and just over half of California's 58 counties participate.

The governor said under his proposal, people would have a say in their treatment plan and have a public defender to represent them. Most importantly, the proposal allows a broader array of people, including family member or first responder, to refer the person for help, he said. Care could last up to 24 months.

But the idea of compelling treatment rattled some, and the California State Association of Counties objected to the requirements put on counties. Other groups called on the need for more resources, which Newsom has proposed for additional psychologists and treatment beds.

“At this point there are a million questions and a million things that could go horribly wrong,” said Kevin Baker, director of government relations for ACLU California, in an email. He said homeless is caused by skyrocketing housing costs "and we won’t solve homelessness, mental health or substance abuse problems by locking people up and drugging them against their will.”

The Western Center on Law and Poverty pointed to a 2020 state audit that found many people put under conservatorship wound up with limited treatment and follow-up.

"Forcing people into temporary hospitalization will not help individuals move out of homelessness when there are not enough services or housing units to begin with,” it said in a statement.

Still, others say that mandated treatment is necessary for some who are too sick to realize they need care.

In San Francisco, a state law designed to get more people into conservatorships has resulted in just two people being forced into care, said Rafael Mandelman, a city supervisor who has watched helplessly as homeless residents languish outdoors.

He would welcome more money for emergency psychiatric treatment beds and staffing. But he also says there needs to be a major change in both the deployment of resources and in the way judges think.

“We also clearly need better systems that are able to respond to the needs of this population much better," he said, “and we need laws that are clear to judges, and that reflect the expectations of the community.”