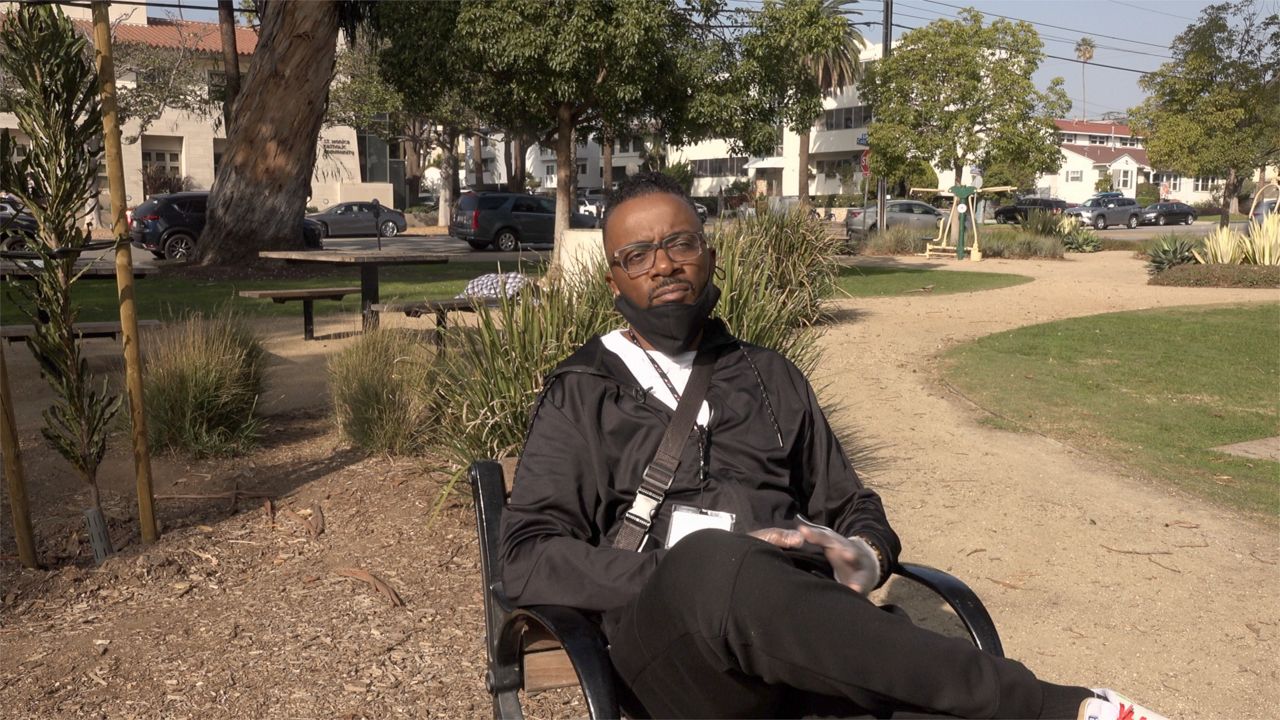 David Askew, who slept on the streets for over a decade, is now a quality of life ambassador for Downtown Santa Monica. (Spectrum News/David Stoelk)

SANTA MONICA, Calif. — The city of Santa Monica is handing out ambassadorships, and David Askew can count himself as one of that city’s emissaries. He sits behind a podium under a large turquoise umbrella in Santa Monica’s Reed Park. A sign on the lectern reads “Downtown Ambassador.”

Askew in on a diplomatic mission.

“I just make sure everybody has an overall pleasant experience in the park, and in the downtown area as a whole,” Askew said.

“Everybody” includes the homeless. Although Askew uses a more diplomatic term.

“We refer to the homeless as ‘street residents,’” Askew explained. “We help them to get any type of resources that we have available.”

Askew hands out pamphlets and tries to connect the unhoused with health services or housing. In the meantime, Askew encourages the short-term residents in Reed Park to keep their temporary residence tidy for them and others.

Askew says one person’s transience could just be, well, transient.

“They just have a problem at the moment,” Askew said.

Downtown Santa Monica, a nonprofit organization that works in tandem with the city of Santa Monica, oversees the Downtown Ambassador program.

But Rawson says, until someone comes up with a solution for the homeless crisis, Santa Monica must find a way to live with those who are unhoused. Rawson considers the homeless residents of the city.

“We’re a very compassionate city,” Rawson said. “We have a situation where we coexist with people who live on the street. We certainly don’t want to sweep anyone away from downtown Santa Monica, including people who are unhoused. But we do have codes of conduct, which we work very hard to help people understand.”

Quality of life ambassadors, like Askew, may remind agitated street residents to mind their manners or to keep the area clean, before police have to intervene.

Safety ambassadors patrol the downtown area on bikes, and are in constant contact with a dispatch center. Rawson says the specially trained employees are staving off the “smash-and-grab” robberies that have plagued other parts of the LA area.

Rawson claims they are quick to respond to incidents and, then, to summon police.

“The ambassadors certainly are a deterrent for any number of people who are up to no good,” Rawson explained.

The emissaries are carefully chosen. Gorge Caragea works for “Block by Block,” the organization that hires and manages the ambassadors.

“Block by Block hires for personality and we train for everything else. We hire people who like to help. People that want to make a difference," Caragea said.

David Askew is one of those people.

“I can relate to the individuals out here,” Askew said while seated on a bench in Reed Park, just a few feet away from a homeless person sleeping on the lawn.

“Because that was me for so many years,” he added.

Caught up in drug and alcohol addiction, Askew slept on the streets for over a decade.

“We all have our struggles,” Askew said. “Everybody has struggles. Everybody.”

Askew has kicked the drug habit. And the key to his recovery, he says, is his job as a Downtown Ambassador.

“By helping others,” Askew said.

He says he works with the homeless to find a way home…like he did.