LOS ANGELES — The two things Ken Craft dislikes the most in life are being cold and not getting enough sleep.

Yet that’s exactly the situation the 58-year-old CEO put himself in this week, as he and a colleague at the nonprofit Hope of the Valley voluntarily became homeless, starting during the most severe rainstorm of the year.

On Monday evening, the executives were dropped off in Granada Hills with the clothes on their backs, $5 in their pockets and a handful of bare necessities to fend for themselves.

“We’ve been doing this work for a long time,” said Hope of the Valley Chief Financial Officer Rowan Vansleve, 41, hours before he and Craft were left on the street. “We have a great deal of empathy and compassion for people experiencing homelessness, but neither of us have had to experience true hardship. So for us, it’s a chance to go back to school and actually understand what homelessness does to an individual. It’s going to be an education.”

Both men took cognitive tests last week to ascertain their mental health before living on the streets. They also underwent physical exams, including blood work. When they return to their regular lives this Friday, they will repeat the tests to see how much mental and physical degradation they experienced.

They expect it will be severe due to the stress of the cold, a lack of food and fear. The two were allowed to bring a pair of T-shirts, a jacket, a pair of jeans, their cellphones and a small hygiene kit with toothpaste, toothbrushes and soap, but nothing else.

As executives for one of Los Angeles' largest homeless services providers, Craft and Vansleve intentionally selected the northwest section of San Fernando Valley for their From the C Suite to the Streets project because it does not have any shelter beds and the cold weather shelter that does exist is already full.

They also intentionally selected December because it is traditionally the wettest and coldest time of the year. Temperatures in Granada Hills are forecast to be 41 degrees Tuesday night — low enough to cause hypothermia. 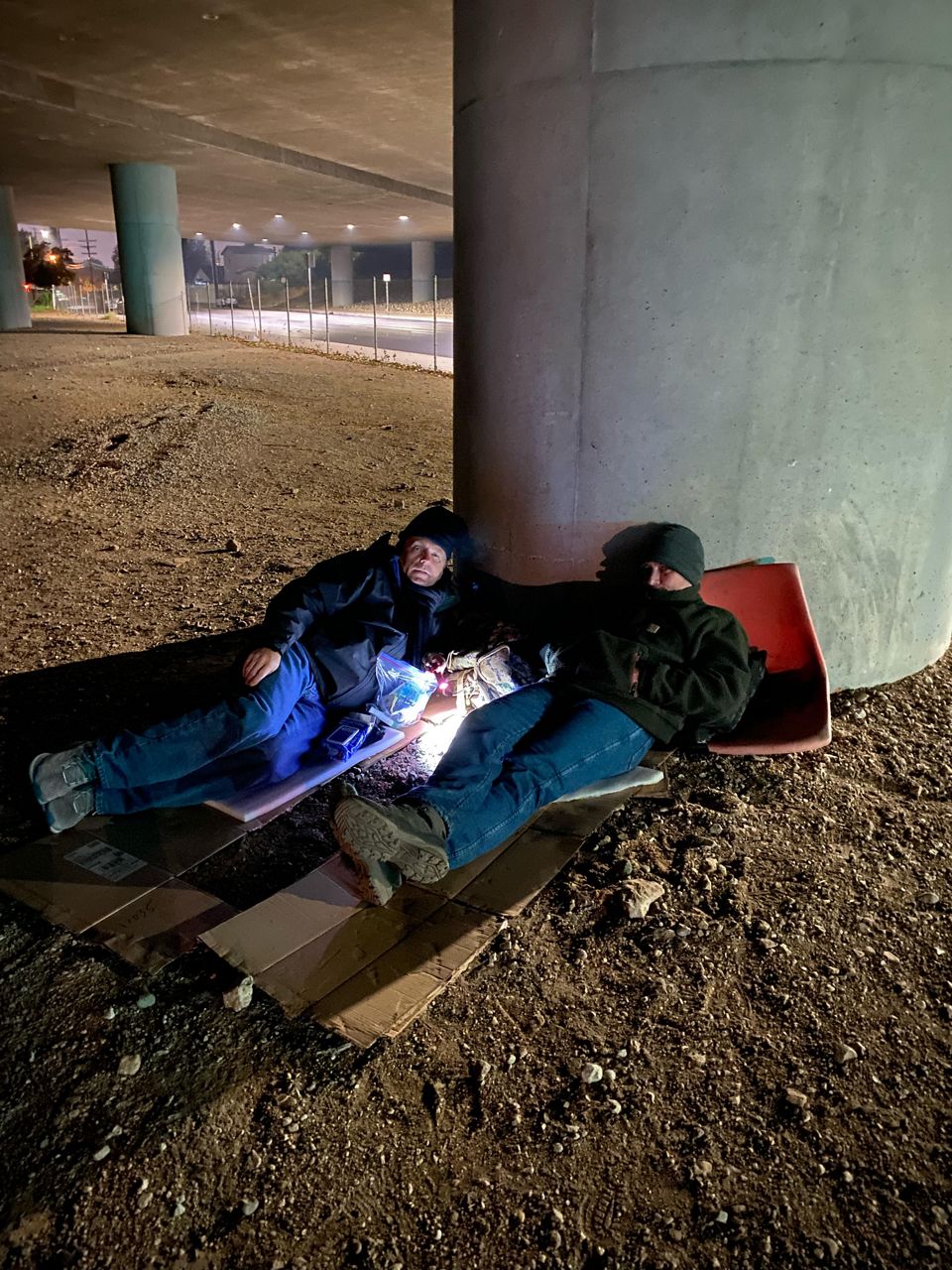 According to Hope of the Valley spokesperson Grace Ancheta, immediately after the executives were dropped off Monday evening “they began to seek refuge since it began to rain. They considered sleeping in the park, but they were afraid they would be removed. They walked 1.5 miles to an underpass on San Fernando Mission Rd. off Hayvenhurt Ave. in the city of Mission Hills. They do not have a tent or sleeping bag and were battling heavy rainfall and high winds.”

A photo showed them huddled together in the dark sleeping on scavenged cardboard boxes.

“I’m embarrassed to use the word ‘homeless’ for what we’re doing,” Craft said Monday before being left in the street. “We’re not homeless. We’re going to be unsheltered. I have a home. Friday I’m going back to my home, but these people I care deeply about who are living truly homeless on the streets, they don’t have that same option.”

For those who are truly homeless, it can take days, weeks, months or even years to find a place indoors.

“It is not acceptable that we have people waiting on the streets," Craft said. "Housing is the only solution.”

In July, California allocated a record $4.8 billion to help reduce homelessness over the next two years. Craft is hoping the state will set aside even more of its $32 billion surplus this year to combat the problem.

“It has to be the No. 1 priority in money, energy, effort, conversation, narrative, and we’ve got to create methods and means to rapidly build temporary interim housing while building permanent supportive housing,” he said. “We need all of the above.”

Hope of the Valley is providing part of the solution, but the need is enormous — and growing. This year, the group added 910 beds to various shelters. Next March, it will add another 107 when it completes the conversion of a former roller skating rink into a homeless shelter. The Trebek Center in Granada Hills is funded in part with a $500,000 donation from the late "Jeopardy!" host Alex Trebek and his wife Jean.

“We’ve done more than we’ve ever done in the past, and it’s still not enough,” Vansleve said.

The 2019 Greater Los Angeles Homeless Count found that 66,433 people experienced homelessness in LA County. Of those, 41,290 lived in the city of LA. That number has likely grown since COVID and is already outpacing available housing.

“We’re losing,” Vansleve said. “Every day, we see photos of people being housed, which is the best feeling in the world. In the middle of that, people are still dying in the street.”

Hope of the Valley partnered with television producers to document their homeless experience, who determined where to leave Vansleve and Craft and what they should be given for their experience.

“We left it in their hands because when you become homeless, you don’t get to control a lot. That agency of being able to control your environment is taken away from you,” Vansleve said.


Before they were dropped in Granada Hills, Vansleve and Craft had to give up their personal IDs and credit cards but were allowed to keep their cell phones to help document their lives outdoors. The documentary about their four days and nights without shelter will be posted to Hope of the Valley’s YouTube channel on Dec. 21.

Intended to raise awareness about homelessness, it is also to help Hope of the Valley raise funds at a time when charitable giving is at its peak.  Vansleve and Craft are no strangers to stunt-oriented fundraising. Years ago, Hope of the Valley launched a program of so-called empathy encounters for C level executives to anonymously spend the night in one of their shelters to experience it firsthand. More recently, they’ve been running back-to-back marathons.

Last year, they ran the equivalent of five marathons — 125 miles — over nine days, from Lancaster to their northernmost Hope of the Valley shelter. In the spring, Craft and Vansleve will hit the streets yet again, upping the ante to run 250 miles over the course of nine days from Death Valley to Hope of the Valley headquarters in North Hills.

“We’re willing to do things that are rather extraordinary to get people’s attention,” Craft said. “We can’t normalize what should never be normalized.”

CORRECTION: An earlier version of this article incorrectly stated the involvement of the documentary's producer. The error has been corrected. (Dec. 14, 2021)