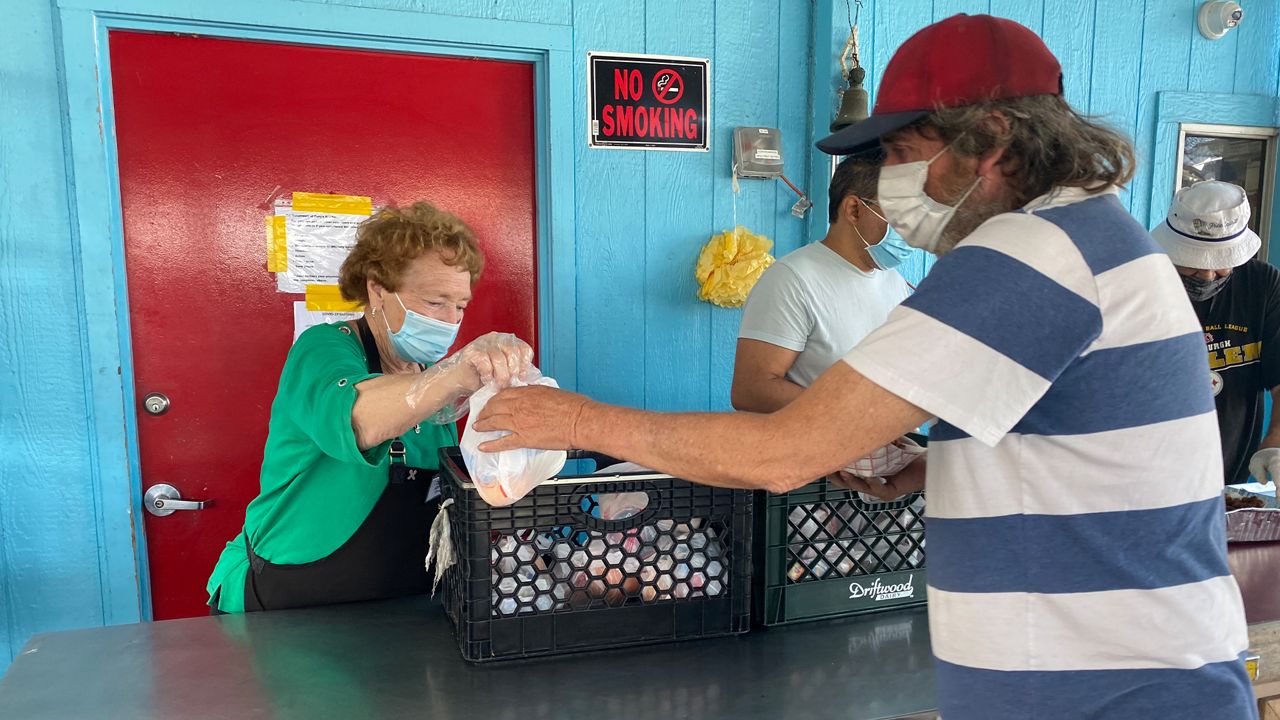 A legacy of service: Mary's Kitchen aids thousands as the pandemic drags on

ORANGE, Calif. — Six days a week, you’ll find Gloria Suess starting the morning with a little prayer before she lends a helping hand to those in need.

The 82-year-old is the CEO and president of Mary’s Kitchen in Orange. Suess has been helping the nonprofit as it serves folks facing homelessness with hot meals six days a week. The kitchen, which has been operating for more than 30 years, also offers other services like haircuts, showers and clothes.

Suess says the kitchen gives its guests a sense of dignity and structure. Since the pandemic hit, guests haven been lining up, with their masks on, and washing and sanitizing their hands before they pick up their pre-packaged meals and snacks.

Suess was a real estate agent 33 years ago when a woman in her eighties named Mary McAnena went into one of her open houses.

She and dedicated volunteers through the years helped McAnena expand Mary’s Kitchen. They went from feeding 200 people a week at Hart Park to thousands of people every week at this facility.

“They get to Mary’s Kitchen about 9 and after they leave here, they just keep walking until they find a place to sleep. So that’s all they do,” said Suess.

While Suess is focusing on keeping the kitchen open and staffed, she is thinking about the future.

“Everybody asks me who’s going to take it from me and I say, 'I’m not going anywhere,' but I do know I have to start training someone,” said Suess.

The CEO says she hasn’t found a person who she thinks can do the job McAnena asked her to do years ago. This job is hard, but Suess says it makes a difference. She kept a letter written by a woman who was the daughter of a man who used to eat at Mary’s Kitchen for years.

Suess reads the letter aloud. These are a few lines from it:

“While people might not change their behavior, with each meal you serve, shower you offer and clean shirt you give, you are keeping people connected to their own humanity and keeping people alive for miracles to happen.”

“Because of the dignity you shared him, he saw himself as having value.”

Each meal is more than just food to Suess. She believes Mary’s Kitchen serves people hope.

Mary’s Kitchen relies on donations from the community since it does not receive state or federal funding.

Donations can be made to Mary’s Kitchen or to Mary’s Purse. For more information on ways to donate or volunteer, please visit maryskitchen.org.