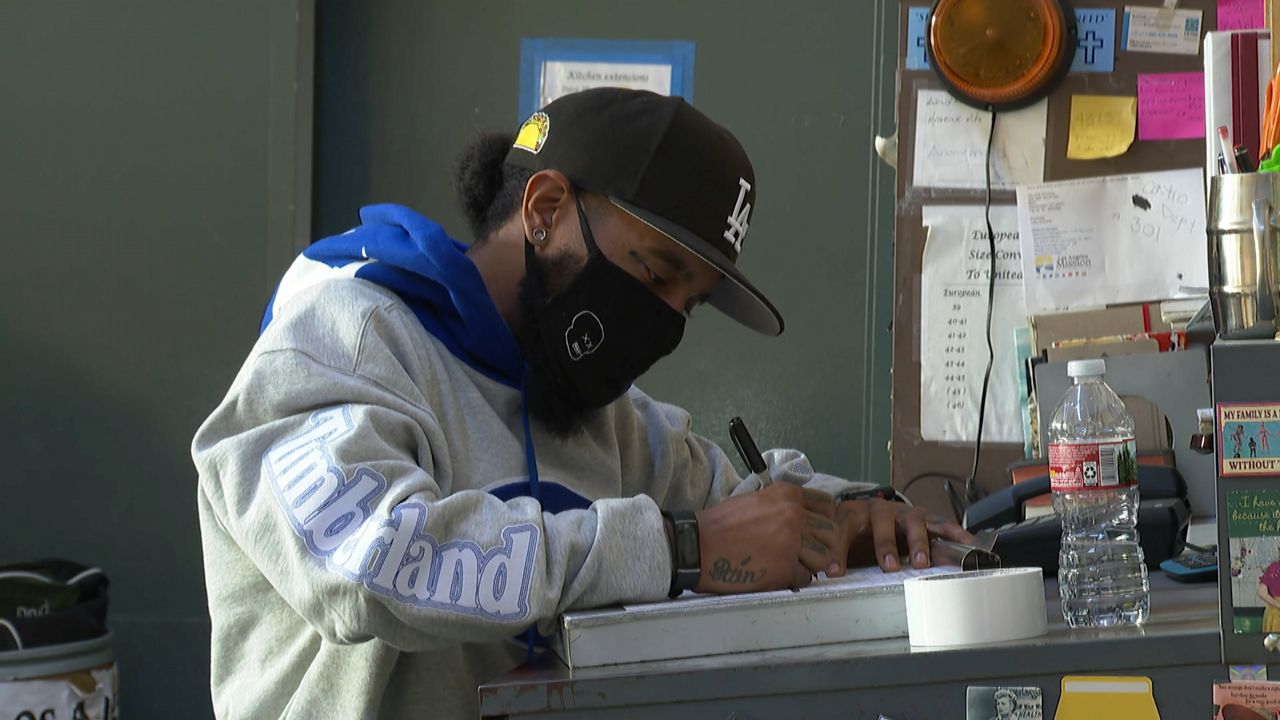 Zion Turner, who was homeless, got his life back on track thanks to the LA Mission.

LOS ANGELES, Calif. — At his lowest point, Zion Turner chose to sleep on the street because he felt his pride mattered more than trusting someone to help him.

“My first thought was I can’t believe this was happening to me,” said Zion Turner.

He said his dad’s passing inspired him to get back on track, and with nowhere else to go, he turned to the Los Angeles Mission.

“After everything, I’m extremely grateful for it because I didn’t have any of this. None of this,” said Turner.

He said the Mission rehabilitated him of his addictions, found him housing and gave him a full time job. Part of his job enables to bring in and track donations for the people living at the Mission. Turner also went to San Joaquin Valley College and earned a degree since graduating from a program at the LA Mission.

“Being able to just go home and have a home that’s mine. Reset and attack the next day is a big difference from just everyday living in that same depressive mode,” said Turner.

There are currently about 64,000 people experiencing homelessness in Los Angeles County and about 7% of them live on Skid Row.

This week, Federal Judge David O. Carter passed an injunction ordering the city and county to offer the entire homeless population of Skid Row housing or some form of shelter by October.

His preliminary injunction orders the offering of shelter or housing for single women and unaccompanied children on Skid Row a place to stay within 90 days, assist families within 120 days and by October 18, 2021, offer every person experiencing homelessness on Skid Row housing or shelter.

With proper and adequate shelter or housing available and if offered to an unhoused person, it is possible they could face warnings or citations for sleeping in public spaces.

“As we’re continuing to go through the document that was released. One thing is clear. This affords us an opportunity, but we need multiple solutions to solve homelessness. It’s not a one size fits all model,” said Vaughn.

The mission’s president used to live on Skid Row in the 1990’s for about 7 years. He said his life changed when he was willing to put his trust in someone and go to the mission for help.

“I think the people are waiting to see if they can trust us, to see if we’ll come together as a community, as leaders to actually do what we say we want to do with the resources that are available to us,” said Vaughn.

Turner is hopeful that by the end of 2021, there will be less people on Skid Row and more in homes.

“If that’s possible and we could make that happen, I would definitely sign up to be part of the team to help do that,” said Turner.

He said he’s now doing what the team at the mission did for him. With every interaction with someone who’s in need of help, Turner said he tries to put himself in their shoes and let them know he can be someone they can trust.