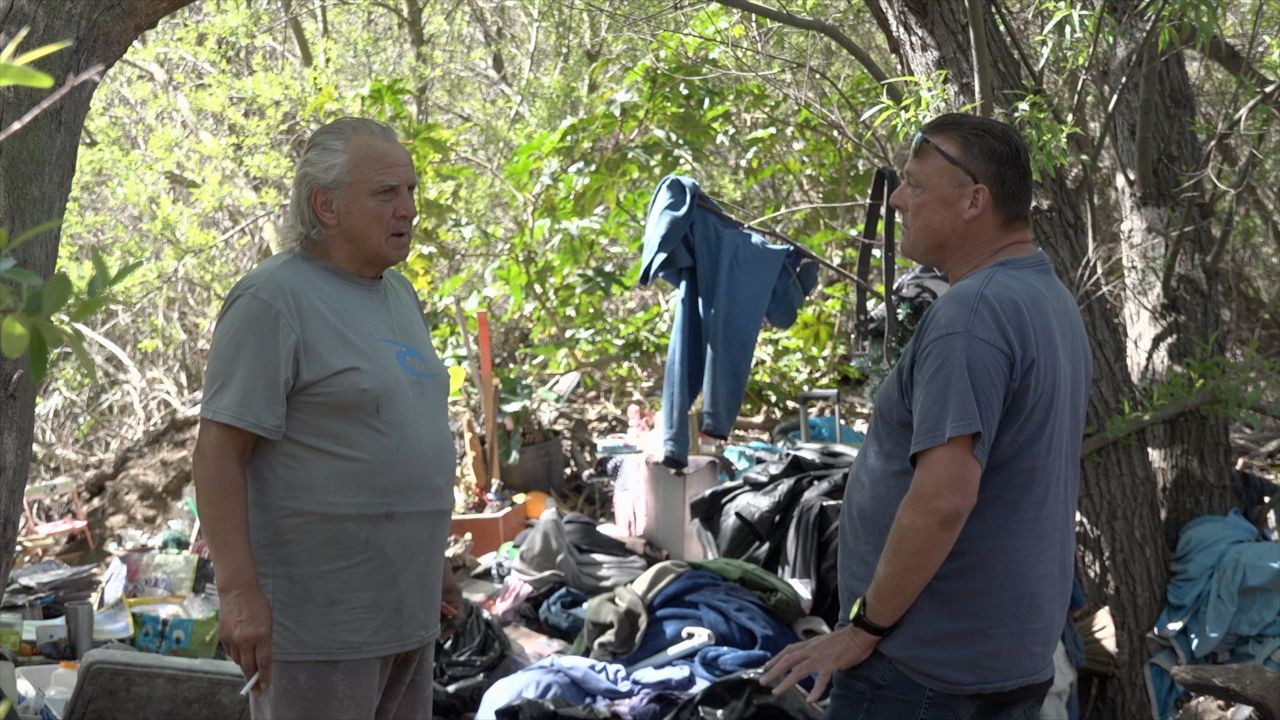 MALIBU, Calif. — On March 5, Gabriel Graham, who does homeless outreach in Malibu, learned he lost a good friend, a homeless man named Frank. Graham, who was himself homeless and a meth addict just five years ago, used to walk the streets and camp with Frank.

Just an hour after he learned of his death, Graham stared at the bare ground where Frank's tent used to be, in a homeless encampment near Zuma Beach the itinerants have named "Margaritaville."

"We're dying out here," Graham said. "And it's just not necessary."

Those words would turn out to be prescient.

That same day, a few yards away, Graham called on someone else he knew, a homeless man named Anthony, a Polish immigrant.

Graham climbed through thick brush until he reached his camp, an area cluttered with clothes, food, and a few chairs.

Graham, who the city of Malibu contracts, urged Anthony to clean up his space. And he was also trying to set up Anthony with affordable housing. Graham tried to sell him on the idea.

"They (even) have funding for the furnishings!" Graham said.

A month later, Graham stands at the same spot. Anthony's camp is still here. But Anthony is gone. And it's not because he found affordable housing.

Last Easter Sunday, at around 10:30 p.m. witnesses said Anthony went to aid a fellow homeless man named Joseph who was hit by a car on the nearby Pacific Coast Highway.

Lucas Lopez, a homeless veteran, was working late that night in a nearby store when he heard screams and some commotion.

Lopez said Anthony came rushing through the door but could only offer a few words in broken English. "Something happened! Accident!" he screamed before hurrying back out.

Lopez ran after Anthony, only to see him standing in the middle of PCH. Lucas thinks Anthony was trying to halt speeding traffic from hitting the fallen man. Then, he said, he saw a tow truck come through at full speed and hit Anthony.

"I turn around and see the tow truck speeding up," Lopez said. "And, then, 'pop,' he hit Anthony!"

Lucas knew both men who were struck down. He considered both of them friends.

Lucas said, before his friend took his last breath, "He said something in Polish, I didn't understand… and, then, he was gone."

Lucas took cell phone video that night. It is a literal blur of red and blue lights as Lucas feverishly panned the camera back and forth across the scene where police cars, fire trucks, and ambulances were parked.

Lucas is heard sobbing off-camera and saying, "Two of my best friends got killed! One of them is right there."

His hand appears in the frame and points to a sheet-covered body in the middle of the road.

First responders pronounced both men dead where they lay.

Tony Trosper was also at the scene that night. He, too, is a homeless vet and a friend of Anthony's.

"He was a very simple man," Trosper remembers. "He was more of a giver than a taker. That man had next to nothing, but he made sure (everyone else) was happy."

"He died a hero," Trosper adds. He said Anthony died trying to help another homeless man.

Trosper works a late-night shift at a store on PCH and, because the buses don't run late at night, he has to walk along the road back to Margaritaville. He said the homeless who walk on the side of the busy, dark highway feel unsafe, even targeted.

He claims drivers will play a game of "chicken." They will cross over the white line on the road's shoulder and then veer away at the last second.

"Just to taunt you," Trosper said.

There is no indication that the deceased were targeted. The L.A. County Sheriff's Department has yet to release a formal report, but, according to a press release, an investigation is ongoing. The motorists stayed at the scene and cooperated with authorities. No charges have been filed.

A Sheriff's Department spokesperson also said alcohol might have been involved on the part of the pedestrians and that they are analyzing video evidence, dashcam footage from the tow truck that struck Anthony.

This is not the first incident. Recently other homeless people have met their death on PCH.

"Four homeless individuals have been hit and killed on this highway in the last 30 days," Graham said.

Graham wonders if the tragedy could have been avoided if he was able to get Anthony and others at the Zuma encampment into housing, a process, he says, is long and bureaucratic.

A month ago, Graham predicted that, unless the city got more of the homeless off the street, more of them would die.

"People are still going to continue to die out here, until something is done," said Graham. "And what the answer to that is, I have no idea."