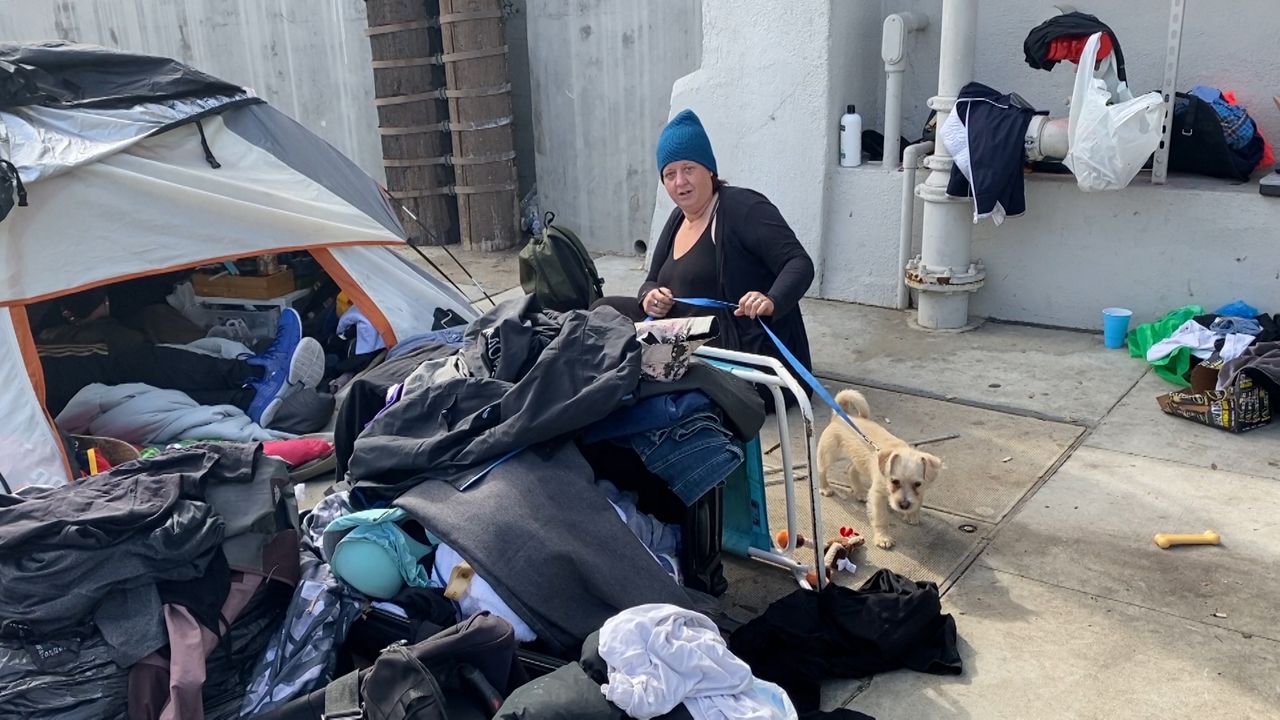 Chandra Hurley of Venice is looking for homeless housing.

LOS ANGELES — Three years ago, Chandra Hurley had a home and a husband. She doesn’t like to talk about how it all fell apart, but now it’s just her and her five-month-old puppy Leo looking out for each other.

“To be indoors would be wonderful. It would be a lot safer and a lot less scary,” Hurley said near her tent on Second Street in Venice.

Hurley said she’s open to any housing she can get — she loves the idea of a pallet shelter like the ones that just opened in North Hollywood or Project Roomkey, the FEMA-funded program to turn empty hotel rooms into a lifeline for the homeless.

“I’m very interested. I haven’t heard much about it. It’s been a nightmare,” she said of navigating the city’s complex shelter and housing system.

Homeless women like Hurley are a major concern for U.S. District Judge David Carter, who is presiding over a lawsuit that seeks to end the spiraling crisis. The number of homeless women in Los Angeles County rose 41% from 2013 to 2019, according to the Los Angeles Homeless Services Authority, or LHASA. The group has not updated the annual homeless count during the pandemic. A study by the Downtown Women’s Center found one in four homeless women reported they had “always” or “often” experienced violence.

On Thursday, Carter moved federal court to Skid Row, taking elected leaders to task for over a lack of results amid the pandemic. A coalition of business owners, service providers, and community leaders called the L.A. Alliance for Human Rights brought the lawsuit in 2020. The group said bureaucratic tangles and neighborhood resistance to new housing projects have blocked the path forward.

Speakers blasted the hearing onto the street, where exasperated homeowner Tony Villanueva listened to the testimony.

“It doesn’t seem like anything’s happening. It’s taking too long. It’s just excuses. One person blames another person and there’s another division and another group and they start another committee but nothing happens,” Villanueva said. “It’s insane.”

When the pandemic hit Los Angeles in March, the city expanded its shelter program with 1,027 beds in 24 recreation centers, according to documents submitted to the court. The program served 2,200 individuals until it ended in September. The city said it has opened four new “A Bridge Home” shelters since March, with 314 more temporary beds.

As a single woman, Hurley is in danger of being assaulted every day. Then there’s the fear of catching COVID-19.

She’s made a home in Venice — inside her tent it’s warm and safe. This is where she will stay, at least until someone offers her a way out.