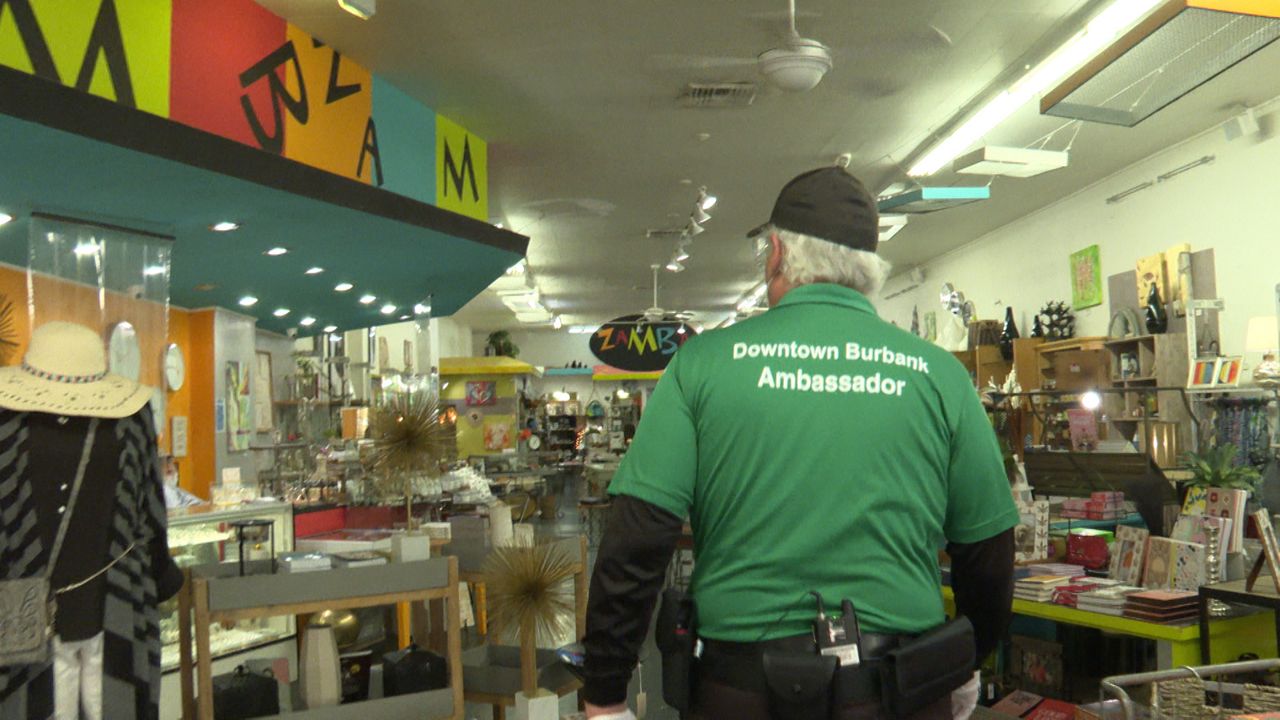 Robert Newman inside a Burbank store. He is a Downtown Burbank Ambassador who works with those without homes.

BURBANK, Calif. – Keeping citizens safe, one touch point at a time. It wasn’t part of their original mission, but team leader Robert Newman says when COVID-19 struck, the Downtown Burbank Ambassadors saw sanitizing as one more way to pitch in.

“We wear many different hats and we wear it with pride," he said, gesturing to his baseball hat that read 'Downtown Burbank.'

Newman first donned his green shirt in 2019 when the Downtown Business Improvement District hired a company called Streetplus to provide hospitality and social outreach in the normally bustling retail area. They later expanded, adding 24-hour patrols at the nearby Metrolink station.

Newman prefers to patrol by bike but also strolls San Fernando Boulevard on foot. Over time, he’s gotten to know the people there. Business owners, employees, and the homeless.

“Homeless people are part of the community, too, right?" he said. "Unfortunately, they are just unsheltered.”

Something Newman understands all too well. He experienced homelessness many years ago, he said, after losing his job and battling cancer without health insurance.

“For nine months I lived out of my car," he recalled. "And of course I was very prideful, you know what I mean? But eventually I realized I need help.”

He got accepted into a work-related program and chose a placement right in the heart of Skid Row, working with the homeless population there before taking the job in Burbank. Newman prides himself on taking the time to really get to know each individual, trying to identify their underlying issues so he can connect them to the services they need. It’s a game of trust and it takes a long time, he said, but it’s worth every second.

“You see somebody who has been sitting on a corner for years, hunched over, didn’t talk," he said. "You finally get them to talk. You finally get to know them and then all of a sudden one day they walk up to you wearing a suit, you know, and it doesn’t even look like the same person."

"It doesn’t happen for all," he added. "I wish it would. But it surely is amazing when it happens.”

And it does happen. In 2019, the program helped place 31 people in housing or reunite them with family. And they’re now expanding beyond downtown to address homelessness anywhere within the city of Burbank.

Newman is excited for this new opportunity. His journey wasn’t always easy, he said, but he sees it as a blessing.

“Because it brought me here today, doing something that is more chicken soup for the soul and helping people that need it," he said.