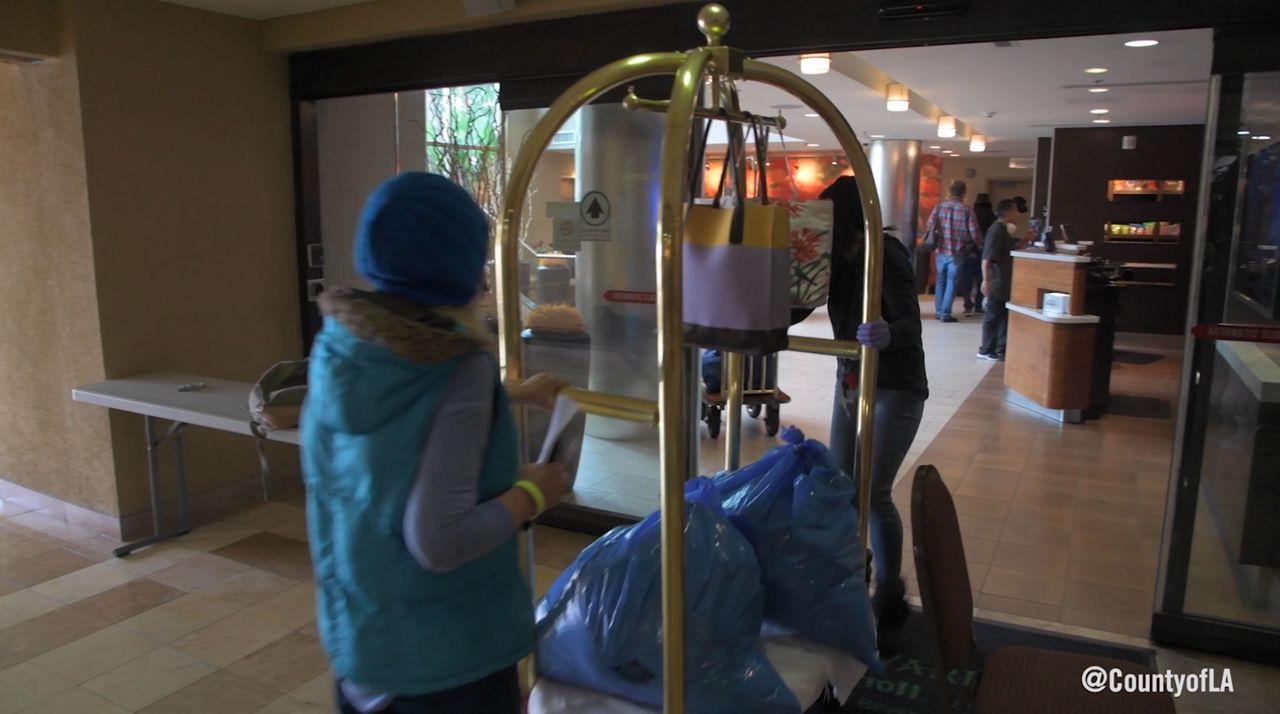 LOS ANGELES — Many hotel rooms in Los Angeles County that sat empty after the hospitality and tourism industries slowed down due to the threat of coronavirus have started to see new occupants.

At least five hotels and motels are being turned into quarantine sites for the most vulnerable of Los Angeles County’s homeless population.

“It’s an amazing opportunity for us to move these folks inside and get progress that we’ve never been able to get in light of this pandemic and this crisis," said Heidi Marston, executive director of Los Angeles Homeless Service Authority.

Marston said her team has been working around the clock to book hundreds of rooms and check in guests like Mr. Wilds, who lived six years on the streets and two years in a homeless shelter.

Homeless residents who are 65 years old or older with underlying health conditions are at a greater risk of contracting deadly diseases. They are getting fast-tracked into temporary housing thanks to a state and county partnership called Project Roomkey. The project is primarily funded by FEMA.

“This was the crisis that predated the crisis in the state of California. We’re doing everything in our power to mediate it head on,” said Governor Gavin Newsom during a press conference.

Unhoused folks like Mr. Wilds will be placed in 15,000 different hotel and motel rooms. So far, the county has booked 465 beds in five different sites. In two weeks, the county is expecting 1,500 more to give people like Ms. Phar a place to self-quarantine after living on the streets for more than four years.

Most of the people who are getting hotel rooms are ones who lived in congested shelters who couldn’t maintain the 6-foot distancing rule.

“I think the biggest piece is this is not only bringing people indoors which we try to do all the time, but it’s dignified. It’s telling these folks you deserve this, you get this and you deserve to rest. You deserve a dignified space to do that,” said Marston.

“LAHSA is proud to step forward at this historic moment to bring together the resources of Los Angeles’ homeless services community to provide shelter for thousands of our most vulnerable neighbors through Project Roomkey,” - @hmarston2, Interim Executive Director of LAHSA pic.twitter.com/yfOdxKEAp8

This project comes around the same time a lawsuit was filed against the city of Los Angeles and county claiming that dozens of portable hand washing stations that were installed by homeless encampments didn’t have soap or running water. Marston says the city and county are working on it.

“What we don’t always think about is the lack of hygiene with this pandemic. The gyms that people used to go to are closed now where they used to be able to take a shower,” said Marston.

She says the project’s plan is shelter people for three months, but things can’t go back to the status quo. Her team is working with hotel guests to get them into permanent or supportive housing after their 90-day stay.

In light of the pandemic, Marston says being able to help people find a permanent roof is the silver lining.