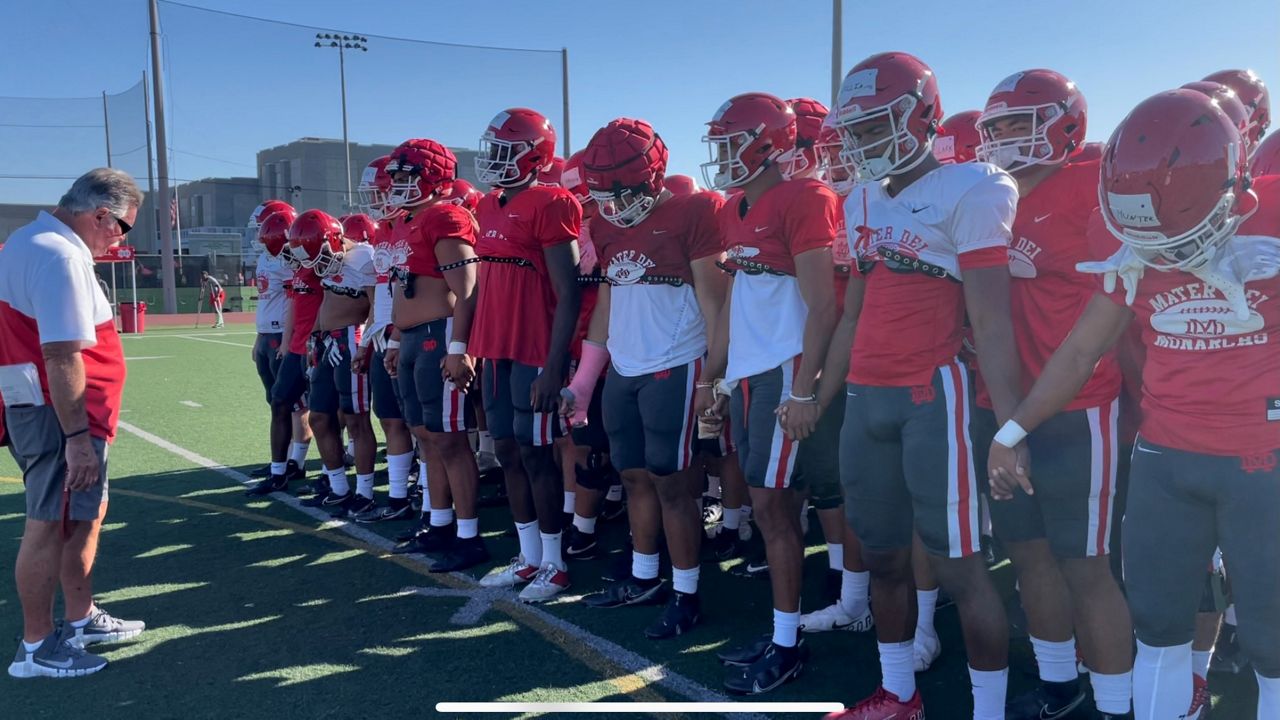 Want to know about Mater Dei football? Look no further than CJ Williams

SANTA ANA, Calif. — To Mater Dei senior captain CJ Williams, the game of football isn't just a sport he plays. It's more about who he is.

Because as a wide receiver, Williams learned at a young age that one's goal is all about separation: Going the extra yard. Doing the extra drill. Outworking everyone else.

It all adds up to separating oneself from the rest.

"All aspects of my life is doing the right thing," Williams explained. "You can't do one thing 100% and give 75% the other way. It doesn't translate. You have to love it, be willing to put in the work."

And it's that extraordinary work ethic, coupled with his unique skillsets, that have made him one of the country's top pass catchers.

This year, he has bigger aspirations for one of the country's premier programs, namely, a state championship title.

So, what makes an 18-year-old want to push that hard, to strive for greatness in all things? Well, to find the answer, one only has to go back to his roots.

At the Williams household, everything is a competition. From who gets to the bathroom first to who has the most trophies or awards. For CJ's parents, Shelby and Maria, his competitive edge was something they noticed early on.

"Even when he was like 6 or 7 years old when they wanted to teach him to hit. If he ever lost, he wanted to do it again," Maria added. "He's just a competitor."

That drive translated from the sports field to his interactions with his siblings. For his younger brother Chris, it's meant dealing with losses.

"I never get to win, no matter what. He is ruthless," Chris said. "I'll even practice like Mortal Combat, and he'll still win. I was in a Chess Club, and he still beats me at chess."

But beyond just a "ruthless" desire to win, CJ's older sister Christiana said it goes deeper than that. CJ, she said, will outwork anyone to get to the top.

"With CJ, it's not that he's competitive; it's that he's gonna work harder too," she explained. "Not only does he want to win, but he's gonna put in the work to win."

After 18 years, the work has definitely and tangibly paid off.

Take a look in his room, and there are dozens, if not hundreds, of recruitment letters to Division One college programs. Although Williams recently made his commitment to Notre Dame, all the offers and attention still create a lot of pressure.

It's something his parents say he's had to adjust to.

"There's definitely a lot of pressure, obviously with him being at Mater Dei and the platform they play at and levels he's achieved," Shelby said. "There's a lot of eyes on him, and you can tell at times he senses that, but you just try to reassure him it's still football, it's just a game."

To CJ, he answers to the pressure and expectations by looking at the bigger picture — hoping it will all be worth it down the line.

"That's why I'm here," CJ said. "With all that pressure, they say pressure makes diamonds, and I think I've put myself in a great position."

And so the hard work, it doesn't really have an end date. It moves from home, to the practice field and to game day, where Mater Dei looks to kick off its season against a Texas powerhouse, Duncanville.

The Monarchs enter Friday's contest with a loaded roster full of top players at every position. Their skill and their talent are never a question.

That's why to CJ, setting the tone at Mater Dei has always been about something more.

"I like to stress the idea that Mater Dei is about hard work and doing it the right way," he said. "And I like to think that's who I am as a person."