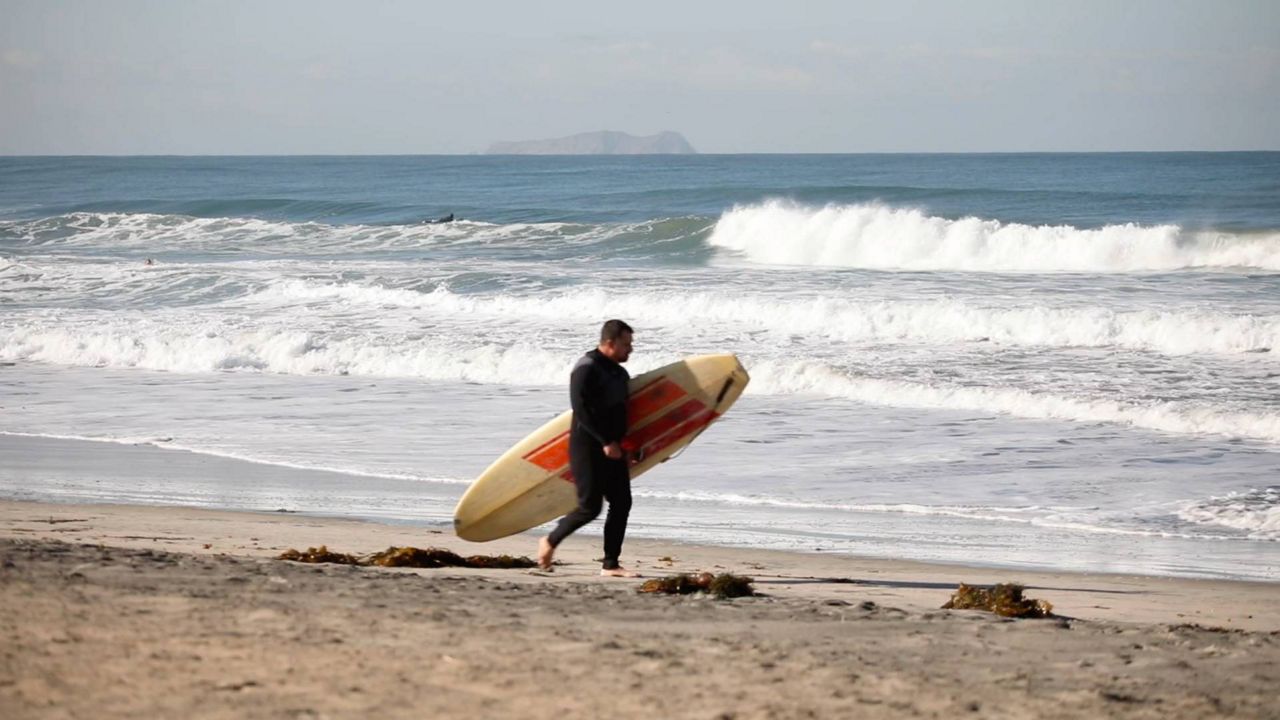 Researchers have found a solution that provides safety to the health of beachgoers. (Spectrum News 1/Bree Steffen)

SAN DIEGO — When Serge Dedina walks the shores of Imperial Beach in San Diego County, he remembers growing up in the ocean.


Dedina is not only an avid surfer, but he’s also the mayor of Imperial Beach, a quiet beach town about six miles from the U.S.-Mexico border.

Dedina stopped surfing in his hometown about two years ago because pollution pouring in from Mexico has reached dangerous levels. He says raw sewage flowing up the coast from Mexico can turn a simple surf session into a game of Russian Roulette.

“I’ve had two sinus operations, ear surgery twice. My kids have gotten sick,” he said. “The extent of the pollution has just catastrophically gotten exponentially worse really over the last 10 years, but way worse over the last three, four years.”

A team of oceanographers and environmental engineers found that if improvements were made to one specific sewage treatment plant about six miles south of the border, it would result in the largest reduction of U.S. beach closures, as well as a dramatic decrease in the number of swimmers who become ill from contact with contaminated ocean water.

Falk Feddersen is a physical oceanographer at Scripps Institution of Oceanography at UC San Diego. He estimates San Antonio de Los Buenos dumps about 35 million gallons of sewage into the Pacific Ocean each day.

Feddersen has been studying how pollution moves through the ocean for years. His research estimates 4.5% of everyone who swims in Imperial Beach in the summer will become sick from contact with sewage contaminated waters.

“Kids are playing on the beach, building sand castles and these sorts of things in the summer, and there is a very strong, high-level risk for people to be getting sick with Norovirus,” he said.

Doug Linen is a co-author of the new study and works for the EPA. He hopes having concrete data will now drive solutions.

“We’ve long suspected that discharges of untreated sewage at San Antonio de Los Buenos were impacting U.S. beaches, but the model suggests that the magnitude and frequency of the impacts are far worse than we had thought,” he said.

Congressional leaders secured $300 million in late 2019 to help address pollution issues, under the U.S.-Mexico-Canada trade agreement. Since then, the EPA has written several concepts for spending the funding with the goal of reducing beach closures in San Diego’s South Bay.

After reviewing the recent study, federal and local officials are prioritizing efforts to reroute much of the wastewater currently pumped to San Antonio de los Buenos to the South Bay International Wastewater Treatment Plant along the border in San Diego. The facility uses more modern treatment technology and will be able to treat and recycle the water.

“What we realize now is that we have to worry about it,” Feddersen said. “It’s very important.”

Dedina will keep a surfer’s eye on the project, hoping for the day his community can enjoy the beaches freely and safely, without worry.

“It’s amazing to have world-class oceanographers applying really high-level science to solving real-world problems, just to get back to normal, which is a beach free of pollution,” he said.

The EPA hopes the project will be completed in the next several years.