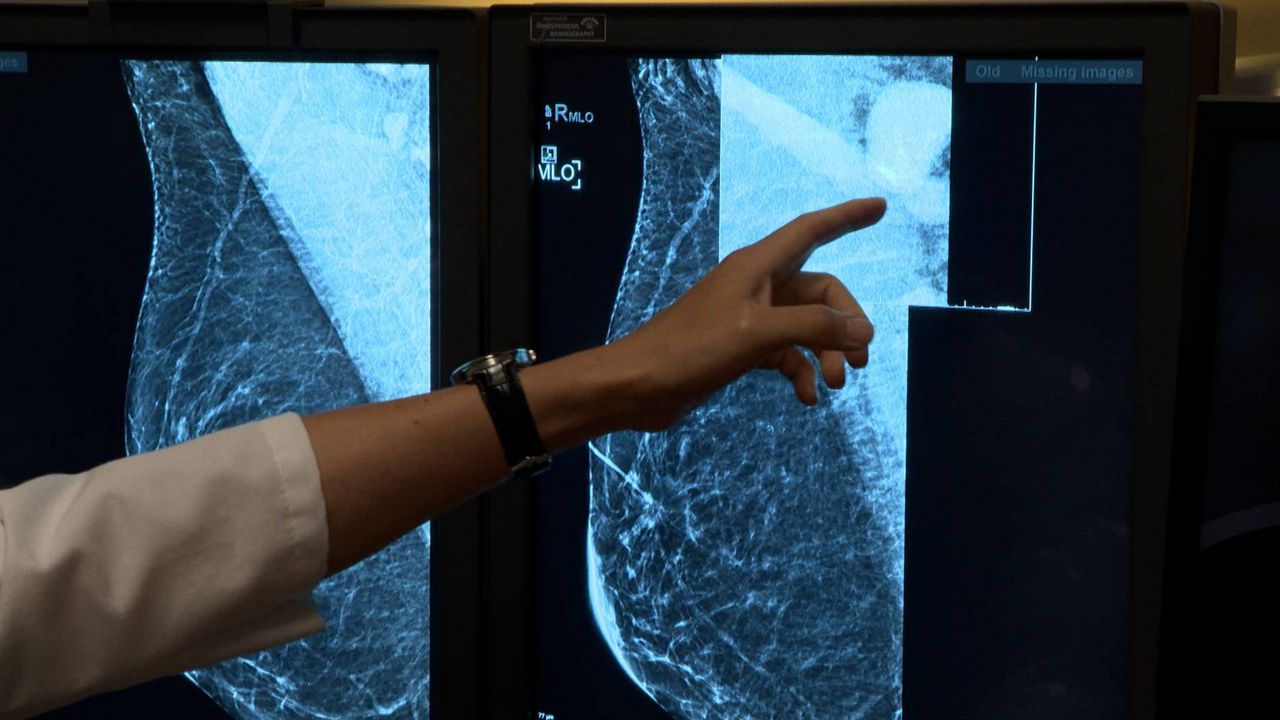 ORANGE, Calif. — Doctors who specialize in breast cancer screenings and prevention are noticing an increase in false positive readings triggered by a COVID-19 vaccine. It is a trend physicians noticed as more people received a vaccine.

Nicolle Velez is a secretary at Providence St. Joseph Hospital in Orange. She is a front-line worker who became eligible to get a COVID-19 vaccine in December.

Velez said about two weeks after her second dose she got her annual mammogram at the hospital’s Center for Cancer Prevention and Treatment — a test Velez has done just about every year.

This time around, she was asked to return for a breast ultrasound.

“When they brought in the doctor I went, 'Oh great, something is going on!'” she said.

Dr. Kenneth Meng, who is the medical director at the Center for Breast Imaging and Diagnosis said he noticed something in her mammogram.

“There were enlarged lymph nodes on the left side,” he said.

Using a patient’s mammogram as an example, Meng explained the difference between a scan from last year and this year: the scan from this year showed larger white circles near the armpit area.

According to Meng, if a person is sick or has an autoimmune disease sometimes both sides of the body can show enlarged lymph nodes.

“[But] if it’s on one side, it would be concerning in the past usually for potential breast cancer malignancy,” he said.

He said enlarged lymph nodes could be a sign in a patient that the cancer has spread. The diagnostic radiology specialist said that this year he has noticed a pattern with a number of patients who have also received the COVID-19 vaccine within weeks of their mammograms.

“Immediately we started seeing more lymph nodes that were enlarged in the current year compared to previous years,” he said.

Meng said they show up on the same side of the body the patient received the vaccine.

“Some data in the past has suggested in the past vaccines can do this occasionally,” he said.

According to Meng, the enlarged lymph nodes can be an “expected reaction” to a vaccine. He explained that when someone gets a vaccine, such as a COVID-19 vaccine, “the germinal centers in the lymph nodes which make the antibodies are revved up. They’re getting ready to make these antibodies so you have protection.”

Seeing “revved up” lymph nodes in a recently vaccinated patient’s mammogram is sort of a good thing, according to Meng.

“You are having some immune response to the vaccination,” he said.

Doctors recommend waiting at least four weeks after the final vaccine dose before having a mammogram. Women with symptoms such as lumps, nipple discharge, or focal pain should schedule one immediately.

Meng said its unknown what percentage of women will get enlarged nodes due to the vaccines since it is still relatively new.

“But we are seeing [a] much higher number of women with node enlargement specifically from COVID vaccines,” he said.

If patients receive a call back from a mammogram screening for an abnormal lymph node on the same side as vaccination, Meng said. “They should be reassured it’s probably a normal immune response to vaccination.”

He said what usually happens is a baseline ultrasound might be performed, with another follow-up ultrasound in approximately three months to check things are back to normal size.

When Velez heard her abnormal scan had likely nothing to do with breast cancer?

The American Cancer Society estimates 43,600 women will die from breast cancer in 2021.

According to doctors, the best preventative tool for breast cancer is to get regularly screened with a mammogram.