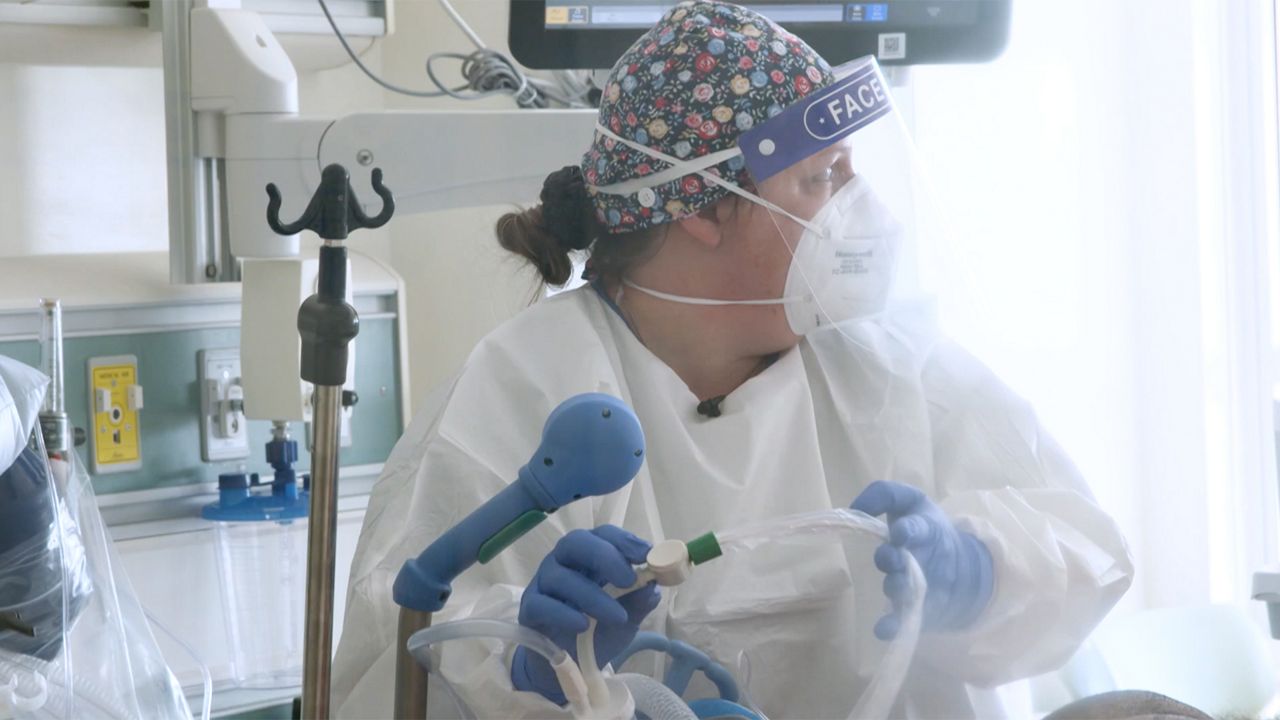 Inside an ICU in LA County: "It’s Like a War Zone"

Editor's note: Spectrum News 1 reporter Itay Hod went inside an ICU in Los Angeles County for a firsthand look at the pandemic's impact.

TORRANCE, Calif. — Every morning, as she walks through the ICU doors, Nicole Remar is greeted with an ever-growing symphony of beeps and alarms — an audible warning of what’s to come.

Even before COVID-19, her job as a respiratory therapist at Harbor-UCLA Medical Center was critical. The pandemic has put her on the front lines of the battle against the virus.

“I never thought we’d be where we are today. My imagination never went this far,” she said. “I don’t know where we’re going to put them. We’re going to have to put them in places like the cafeteria.”

Every single room in her ICU is filled with COVID patients — medically paralyzed and breathing through a tube. Before the pandemic, the hospital had about 20 people on ventilators at any given time. Now, it has 61.

Respiratory therapists like Remar help people breathe. Some call them the unsung heroes of the pandemic. They are there at every intubation and manage all ventilators. As a result, they are continuously exposed to the virus.

This is particularly true during “proning,” when patients are flipped on their stomach in an effort to get more oxygen into their lungs — a carefully choreographed process that requires a small army of people. Remar is in charge of the patients’ airways. One wrong move can be detrimental, not just for the patient, but also for the staff.

“You’re running the risk of everything in that room being infected with COVID. That’s why we’re wearing our full gear,” she said.

Going into the ICU rooms requires suiting up from head to toe. Remar said she goes through that process an average of 80 times a day.

One of her patients is a young man in his mid-30s who has been on a ventilator for the past week. It’s unclear how he contracted the virus. The first thing you notice inside his room is the silence. It’s as though life here is on pause. Just a week ago, he had a life. Now he’s fighting to keep it.

He’s alone here. No family members are allowed in the ICU. Remar is his only human interaction, which is why she makes it a point to talk to him.

“We know that they can hear us they might be dreaming or in a dream-like state. But we want them to hear our voices,” she said.

Peeling off the PPE is a process in it of itself — first the gown, then the gloves and finally the shield and mask.

“We have to make sure we take it off in a way that doesn’t bring the infection outside of the room,” Remar said.

According to a new study, one in three people in Los Angeles County has been infected with COVID since the pandemic began, a jaw-dropping statistic that underscores just how fast the virus is spreading.

In the last few days, health officials said they’ve seen a downward trend in new COVID cases, a hopeful sign that the county may be on the road to recovery.

But while hospitalization rates are down ever so slightly, the number of patients is still high.

Harbor-UCLA, which services the South Bay, is so inundated, it’s now placing patients anywhere it can. Even so, it’s running out of spots. Of the hospital’s 453 beds, 169 are occupied by COVID patients with more coming in every day.

It’s gotten so bad, the adult emergency room had to be turned into an additional COVID ICU.

“It’s like a war zone,” said Remar. “I’m ex-military and this is what it reminds me of. It reminds me of being in a war, hospital, triage, rationing care. But we're in the United States.”

The relentlessness of the  pandemic has triggered a growing mental health crisis among hospital workers, marked by anxiety, depression and Post-Traumatic Stress Disorder.

“We’re having bad dreams, scared to come to work,” Remar said. “My anxiety has increased so much, I've had to seek counseling.”

But every now and then she finds a reason to smile. And those moments, she said, make it all worthwhile.

“I had a patient leave just this past weekend. He was one of the sickest patients I had. When we put that breathing tube in him, I thought that was going to be it that day,” she said. “After three weeks he started getting better. We were shocked.”