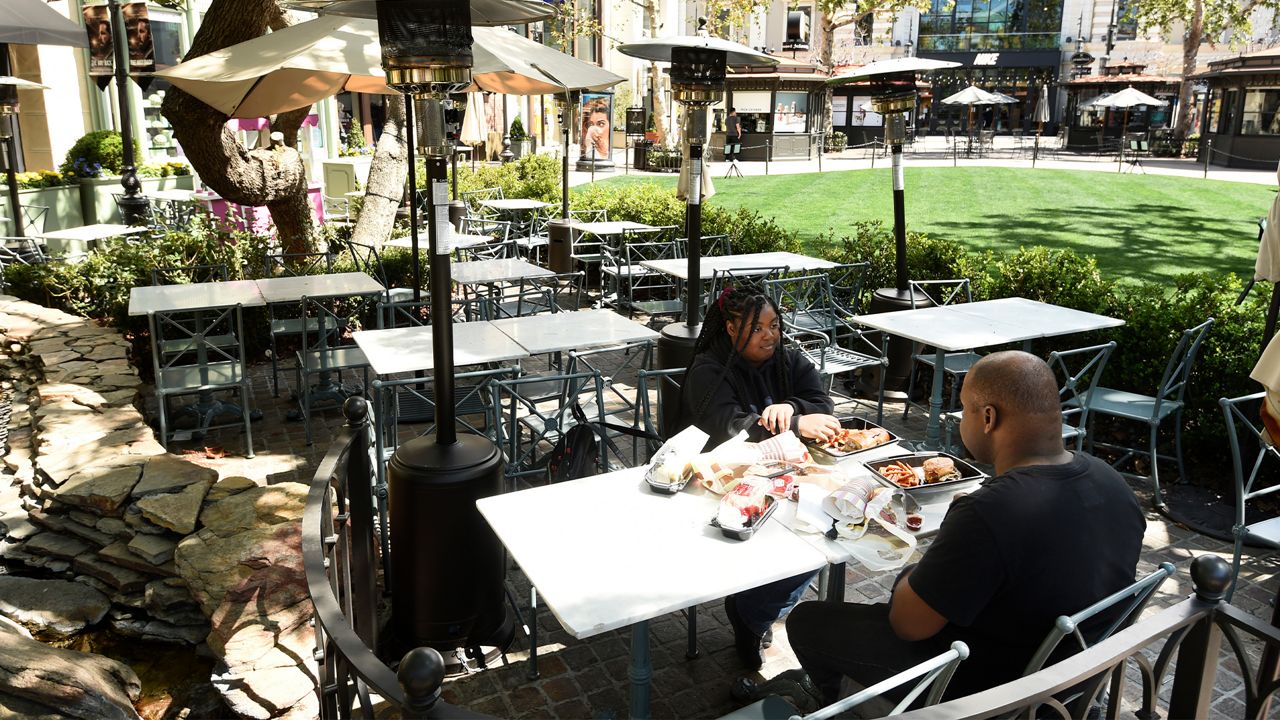 In this Aug. 18, 2020, file photo, Ashley Kelley, left, and Justin Sigler have lunch in a nearly empty outdoor dining area at the shopping and entertainment complex The Grove in Los Angeles. (AP Photo/Chris Pizzello,File)

ARTESIA, Calif. – When Rishi Patel opened his restaurant in February, it was the culmination of years of saving up money and careful planning among himself and four partners.

That celebration was short-lived because they'd been open for less than two weeks when the pandemic hit.

“There was more of a fear of the pandemic than actually losing business cause nobody knew really how long it would be,” Patel said.

His restaurant, called “Dip Shabu Shabu,” didn’t reopen until June and it was barely in business for another two weeks before L.A. County Public Health officials closed restaurants again. After that, he decided to hold off on reopening.

“It was kind of going to be even more of an issue to delay outdoor dining because of the fires. There was ash everywhere,” he said. “Having hot soup outside in the summertime just didn’t make too much sense.”

But with cold weather rolling in, Patel says that means busy season for his restaurant, which serves a Japanese-style hot pot dish with meat and vegetables. He decided to give reopening another shot.

“I even bought hedges and we bought some string lights out of our own pockets just to make it look a little bit nicer,’ Patel said. “The hedges come tomorrow so I’ll be able to use them for two days.”

Less than a week after reopening, Patel is preparing to close for a third time as Los Angeles County Public Health officials say all indoor and outdoor dining must shut down Wednesday, Nov. 25 at 10 p.m. as the average number of daily COVID-19 cases for the past five days has topped 4,000.

Ann Hsing, President of the Independent Hospitality Coalition which represents restaurants, bars, clubs and hotels in the greater L.A. area, says restaurants are being unfairly targeted in this latest round of shutdowns.

“Where is the science on the data pointing to the fact that it’s restaurants that have caused a significant spike in cases?” Hsing said. “To be honest, if the cases are out of hand, we fully support getting it in control, but the question is, why are the restaurants being, what we feel, is being blamed and acting as the scapegoat?”

The public health order is also facing backlash from community leaders. L.A. County Supervisor Kathryn Barger opposes the public health order, saying in a statement that data from the County’s Public Health Department reports “that only between 10 to 15% of positive cases reported dining out with someone who tested positive, while more than 50% reported being at a private social gathering with someone who tested positive.”

Supervisor Janice Hahn also expressed concern over the new orders, tweeting “Some of these restaurants are barely hanging on. I hope this isn’t the last nail in their coffins. I wish we could have figured out a way to put in more restrictions rather than completely shutting down dining.”

Some of these restaurants are barely hanging on. I hope this isn’t the last nail in their coffins. I wish we could have figured out a way to put in more restrictions rather than completely shutting down dining.

The city of Pasadena also announced that outdoor dining will be allowed to continue, despite L.A. County’s health order.

Patel says the shutdowns are taking a personal toll as he is trying to keep his business afloat, while getting ready to welcome his first child next summer. He understands the reasons for the restrictions, but points out that he, along with countless restaurant owners, could use some help with their businesses.

“Help us with rent, reimburse us for all the outdoor dining. I mean, you go all over the city, there are tents everywhere,” he said.