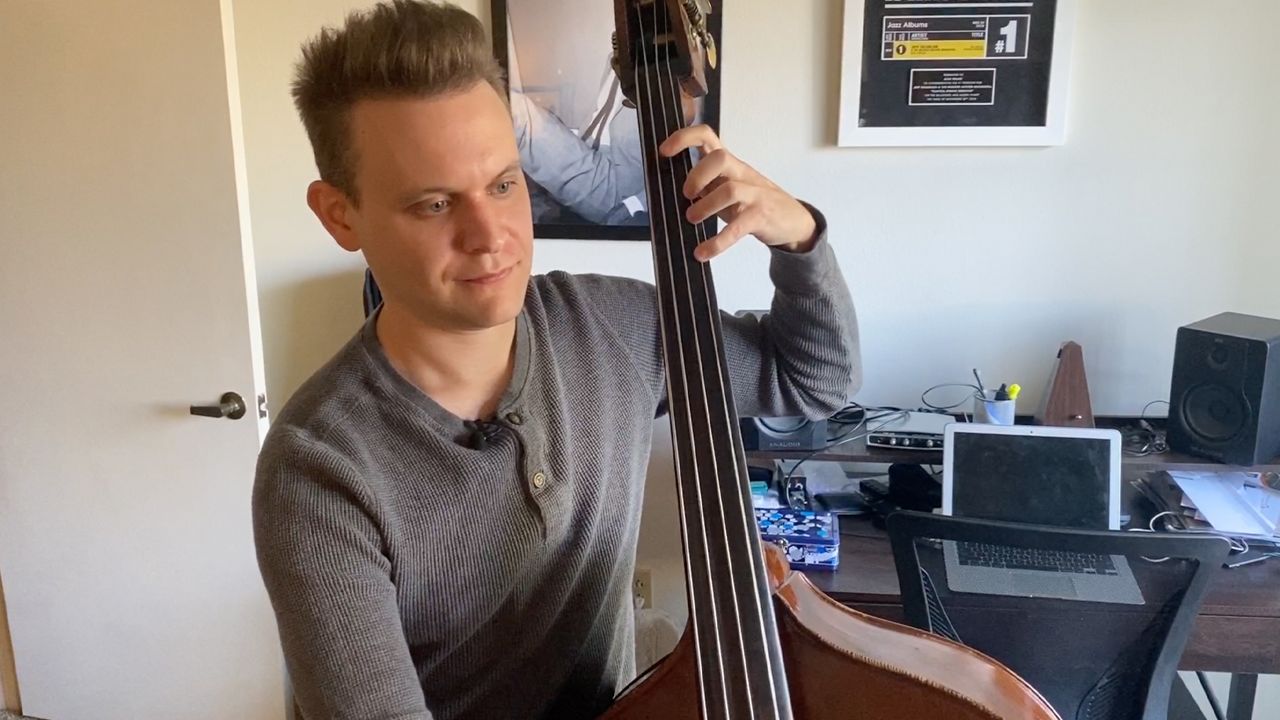 STUDIO CITY, Calif. — Forced out of work by the pandemic, jazz musician Alex Frank has been playing the last eight months by ear. He stays home in his valley apartment most days, playing his acoustic bass for an audience of music sheets and house plants.

“This terrible pandemic totally destroyed my industry and even my career. Within a matter of a few days I had my year put on hold. Got wiped out in a few days.”


A calendar full of upcoming tours and performances in Europe and Asia faded away. Before the safer-at-home orders, Frank played alongside actor-musician Jeff Goldblum in the band “Jeff Goldblum and the Mildred Snitzer Orchestra.” He’s played for crowds of tens of thousands of people, including at Glastonbury in 2019 and performing for the Queen of England.

“It really is terrible that we haven’t been able to play,” Frank said. “Especially with jazz, it’s a music that’s meant to be played with people. You’re improvising and feeding off what other people do.”

When Frank heard about a Pfizer vaccine trial looking for volunteers, it struck the right chord with him and he eagerly signed up.

“I figured I’m a big proponent of science and I read a lot of books on science, and I figured if I could help a little bit to speed this along why not?” Frank said.

As far as the process of getting vaccinated, Frank said he had to undergo a physical, a coronavirus test and an antibody test before getting a series of two shots. The second, a booster shot, followed three weeks after the first.

Frank said he didn’t experience side effects immediately after the first shot except for a sore arm. But seven days later he woke up with a mild fever and night sweats, which he had to report to the trial administrators. He went back to sleep and in the morning he said those symptoms had disappeared and he didn’t feel ill again.

“They said there could be a delayed reaction,” Frank said. “But it wasn’t anything too bad.”

Frank lives for the human connection he feels when playing his jazz and he hopes that by being part of the trial, it will help him re-connect with the people he loves and misses most as soon as possible.

“I have two parents who are older, they’re in the high-risk category, so you know it’s hard for me to even see them now, so the sooner they can get the vaccine out the sooner life returns to normal,” Frank said.

Just this week, Pfizer announced the company is one step closer to distributing its vaccine after preliminary studies showed it was more than 90 percent effective at preventing symptoms of COVID-19. Officials say it could be approved for use as early as next month.

“There was no possible way we were conceiving it would be that effective so that was pretty amazing,” Frank said.

Frank said it’s rewarding to know he played a small part in the race for a vaccine. He hopes it becomes available to the wider public soon.

“I throw my hat in with science. I like to think there are good people out there who are trying to rid the world of this awful virus,” Frank said. “I don’t think there will be resemblance of normal until they get the world vaccinated.”