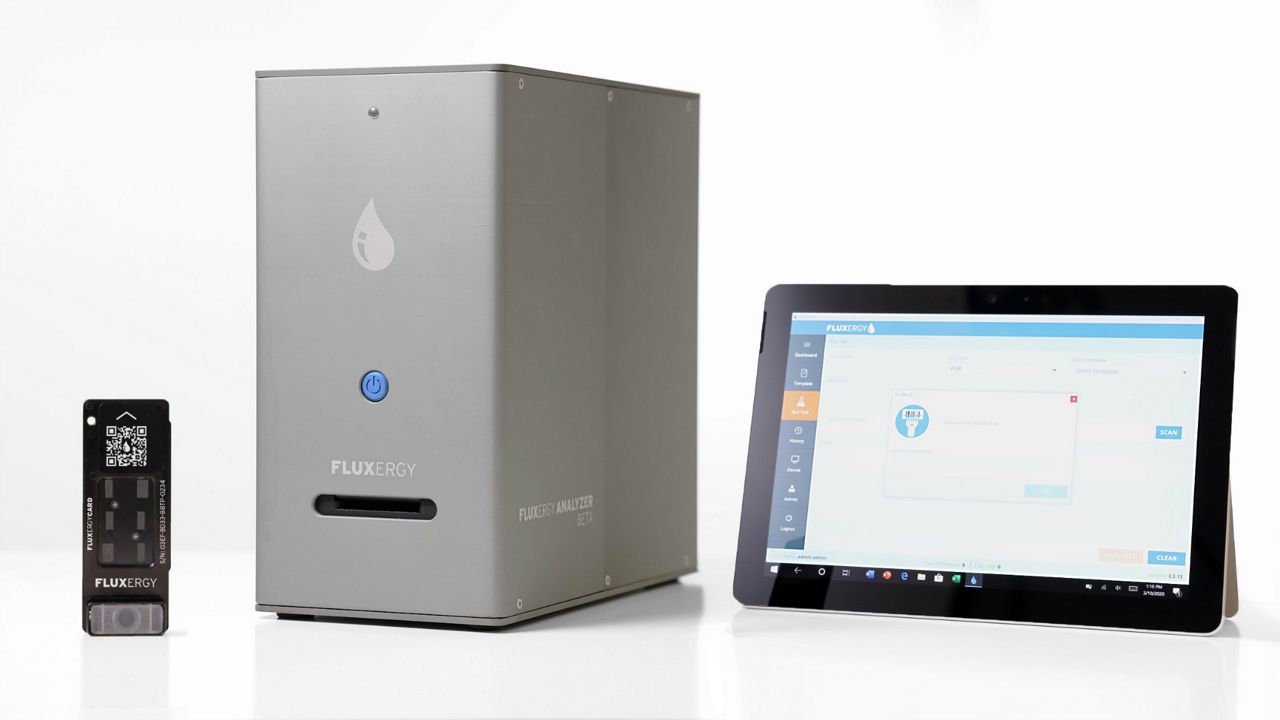 IRVINE, Calif. — As more COVID-19 tests become available, speeding up result waiting times is what some companies are working on.

Some companies have developed tests that can deliver results within minutes. A company in Orange County has developed a rapid test from things the co-founders learned from race cars.

The system may look just look like a computer tower, a tablet, and a cartridge. But aerospace engineer Tej Patel says the system he co-created can cut down on COVID-19 coronavirus test result wait times. And not just by a little.

“It’s under an hour to get the full test result," Patel said. "That’s from actual sample collection to actual answer.”

The tests currently being used at drive-thru testing and hospitals often take days to deliver results to patients, often due to samples having to go to a lab. But Patel says Fluxergy LLC’s rapid test allows testing to be done on the spot.

“Ultimately if people have that information, they can take care of themselves much better, right?” he said.

To help people is the reason Patel pivoted his career several years ago to the health care industry. He used to work on race cars, including Formula 1, building systems like torque sensors.

He says he worked on projects such as, “being able to measure power from an engine. Things like that. But all those, they ultimately, the whole idea is you’re trying to measure small minute quantities of something.”

Patel and a co-worker Ryan Revilla took the skills they learned on the track and started their Irvine-based company Fluxergy.

“Instead of torque, we’re trying to measure small minute quantities – let’s say of a virus, or a biomarker," Patel said.

They developed a device that starts just like other tests with a swab sample from a patient’s nose. It’s mixed with a compound. The liquid is then placed into an opening in the test cartridge.

“You’ll put the cap on the test card and then you’ll stick the test card into the device," Patel said. “You do what’s called polymerase chain reaction – where you try to amplify that nucleic acid – to the point where you can visually see it."

The nucleic acid is the building blocks of living organisms. If the virus is in the sample, Patel says the chain reaction science will cause it to multiply. If that happens, Patel says the center section of the test cartridge would glow like a glowstick.

“Ideally, you don’t want to see that," he said.

During the past seven years, Fluxergy has made similar tests for HIV, flu, and other diseases. Just six weeks ago, as Patel, Revilla, and their team watched the COVID-19 coronavirus grow into a pandemic, Fluxergy got to work to make a test for COVID-19.

“It’s definitely crazy, but we’re just glad we’ll be able to help as much as we can," Patel said. It's to help patients – and health care workers – like Dr. Davey Smith who’s a virologist who did the tests to validate the Fluxergy’s rapid results test.

“Having an immediate result can really help us both protect our nurses, our staff, and ourselves, but also give our patients the very best care at the time we’re seeing them," Dr. Smith said.

The team applied for emergency use authorization from the FDA on March 30. They are still waiting for word from the agency.

The FDA has worked to expedite emergency approvals to get more products to health care facilities. Emergency Use Authorization is a “relaxed standard” that requires fewer data supporting the product, according to a statement from the FDA.