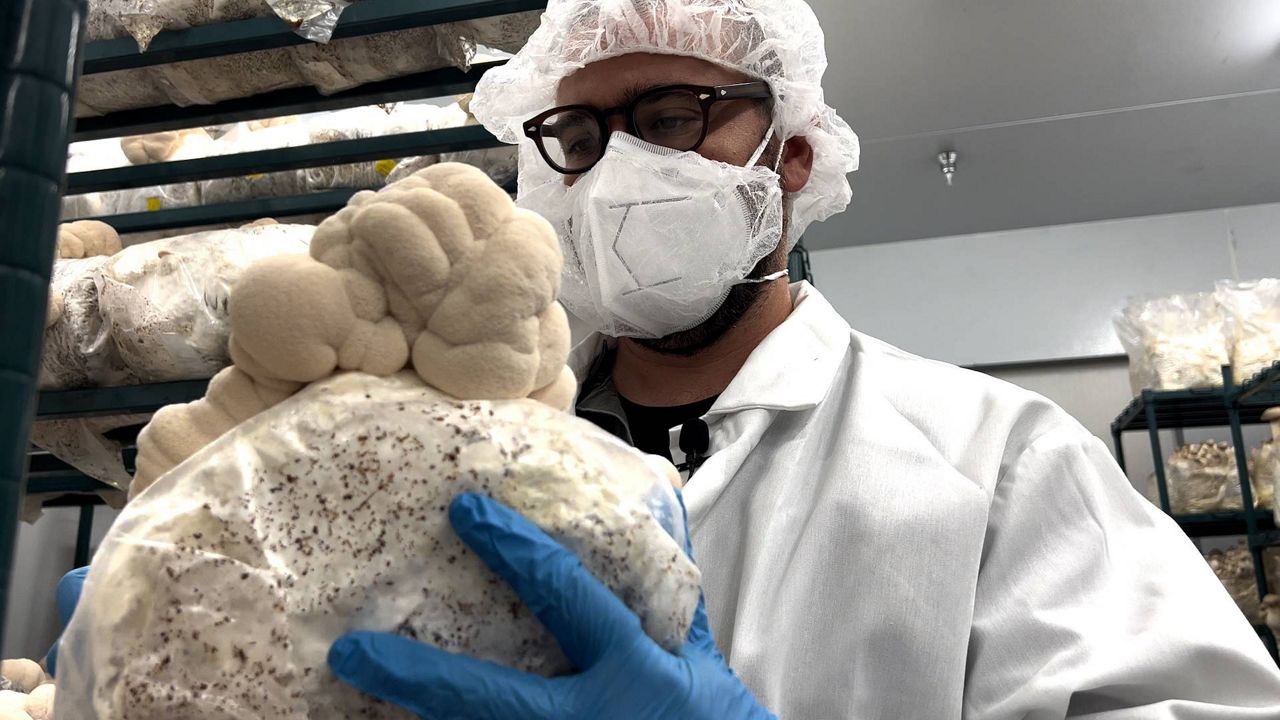 Culinary mushrooms having a renaissance in LA, thanks to locals

LOS ANGELES — When it comes to sustainability, the future is looking bright for specialty culinary mushrooms: trumpets, shiitake, blue oysters and the almighty lion’s mane.

A few locals have already seen the trend and jumped on the bandwagon.

It was during the COVID-quarantine, and especially when their baby was born, that Justin and Mia Nguyen tried to grow as much of their own food as possible from their Long Beach cottage.

“Especially with the little one. I really wanted him to see where his food comes from, and that it’s not just from a grocery store and it comes off a truck,” Justin Nguyen said.

It was only natural when the couple started growing mushrooms inside their garage. So many mushrooms, in fact, that they started a company called Long Beach Mushrooms and had to expand into a small warehouse space.

This is not what the Nguyen’s do professionally — Justin is an assistant principal, and Mia is a physical therapist. But for them, mushrooms became a passion project. The couple showed Spectrum News 1 around their small warehouse, where they have several growing tents.

“Each one can produce up to 200 pounds a week of mushrooms, which is pretty insane,” he said.

And today, the Nguyens sell to friends, family, and local restaurants. But they see these nutrient dense fungi as the way of the future.

“It’s so important, what we’re doing, and what a lot of other people are doing, which is growing food inside the city,” Justin Nguyen stressed.

The industry at large is growing. According to market analysis from Grandview Research, the global mushroom market was valued at $50.3 billion in 2021 and is expected to grow by 9.7% by 2030.

The demand is driven largely by the pandemic shift towards growing and foraging your own food. The mainstream population may also be realizing the many nutritional benefits of mushrooms—they pack in protein, many micronutrients and according to UCLA, “Mushrooms are a powerful source of ergothioneine, an amino acid and antioxidant that prevents or slows cellular damage.”

“These are a version of our proprietary technology that allows us to grow these beautiful mushrooms right on site,” Carter said. “You can find them in Texas and New York in various restaurants and grocery stores, and soon to be in LA in grocery stores and restaurants.”

Carter is in the process of opening a 34,000-square-foot production warehouse in Vernon, where Smallhold will grow and process thousands of pounds of mushrooms for local customers like Erewhon.

Carter said he went all in on mushrooms because they are the sustainable food of the future — they use less water than most crops, grow on the recycled byproduct from the timber industry, and because of their short shelf life, they have to stay local.

Justin and Mia Nguyen and Andrew Carter each came to mushrooms after working many years in previous careers, and they all say mushrooms are the future.

CORRECTION: This story has been updated with the correct size of the production warehouse that Andrew Carter is opening in Vernon. (June 15, 2022)