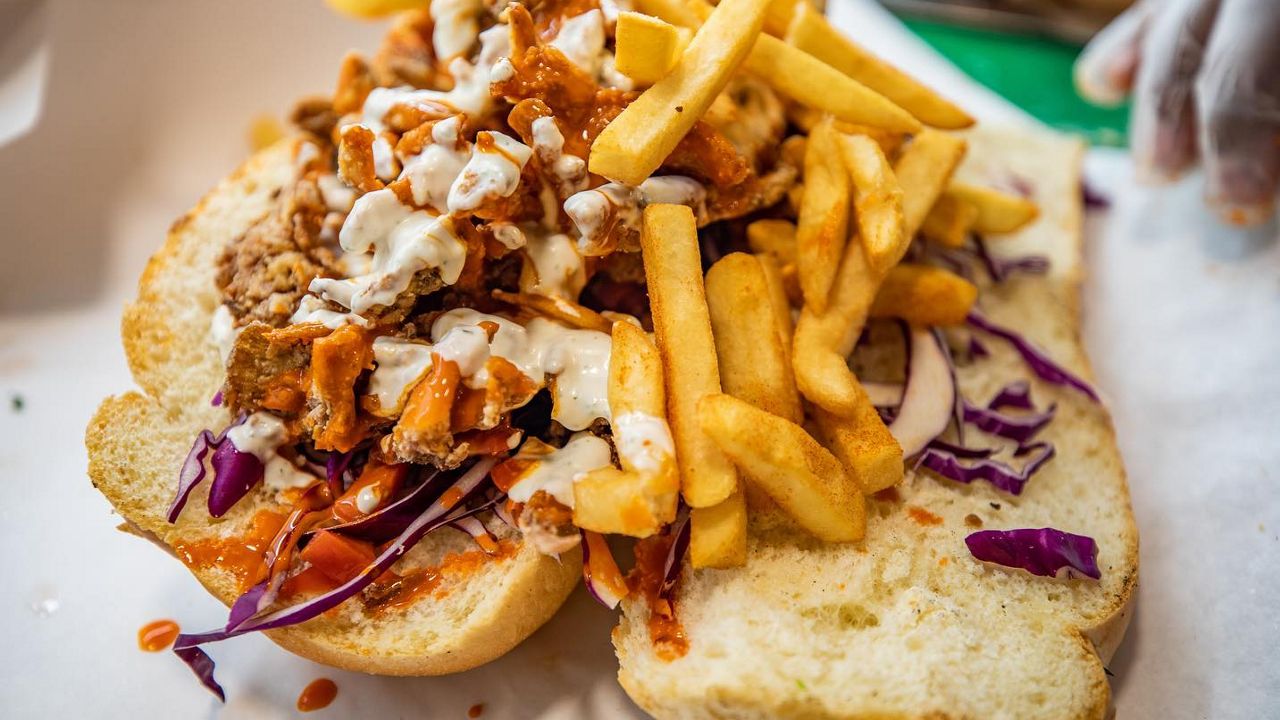 Chef Avonte Hartsfield aims to make vegan food accessible and affordable to everyone.

SAN DIEGO — The sound of food sizzling on the grill means Chef Avonte Hartsfield is working his magic.

“Nice and crispy, all the right texture. Just how you would expect any pulled pork,” he said as he inspected the progress.

Hartsfield’s pulled pork, though, is made from jackfruit. He’s the genius behind Rollin Roots, a kitchen that cooks with plants. Their slogan is “Dank Ass Vegan Food” and the menu is as sassy as its chef.

The Rich Gal is a po’boy sandwich made with hearts of palm, the Spicy Boy uses oyster mushrooms to mimic chicken, and the Daikon Love is made with his own creative version of vegan beef. Everything is soy and nut free.

His concept goes beyond getting people to eat more plants; he’s working to make vegan food accessible to everyone.

“Growing up in Black communities, there’s no vegan food,” Hartsfield said. “When I grew up, the vegan people I thought of were people doing yoga on TV and eating salads and, you know, going to retreats and things like that.”

Most of his dishes cost less than a fast food combo meal and his sandwiches are as big as your arm, smashing the reputation surrounding some vegan food of having tiny servings and a big price tag.

“I mean honestly, our food’s like a lot bigger,” he said. “So this is probably two portions at a fast-food restaurant or something.”

Randall Domescik is a believer after trying the Spicy Boy Loaded Fries.

“So this is made out of fried oyster mushrooms and buffalo and I’ve always loved buffalo chicken fries, so I think Avonte’s the first vegan one that I’ve had so it’s so good,” Domescik said. “Every time I come here, I got to get it.”

He tried going vegan, but could never find anything that satisfied him until he tried Rollin Roots.

“I thought ‘Wow, this is huge. I don’t even know if I can eat all this!’” Domescik said.

It’s that reaction that drives Hartsfield to hand-roll every macaroni and cheese ball.

“We really don’t like advertising as vegan,” Hartsfield said. “But I really hope that people, after trying our food, they realize what they’re missing out from vegan food and how good vegan food can be.”

Rollin Roots is looking to open a restaurant in Los Angeles in the next few months.