LOS ANGELES — It’s the rare parking lot in Los Angeles that doesn’t allow cars, but that’s by design at the new Bike Shed Moto Company in the Arts District. Opening Friday, the motorcycle-themed destination is a mecca as much as it’s a meeting space for people who love two wheels.

Walk into the 30,000-square-foot Bike Shed, and there’s a 350-seat restaurant, a barber shop and a tattoo parlor. There’s also a store, an event space — even a private members-only club — all of it filled with motorcycling ephemera that celebrates the joys of the open road. 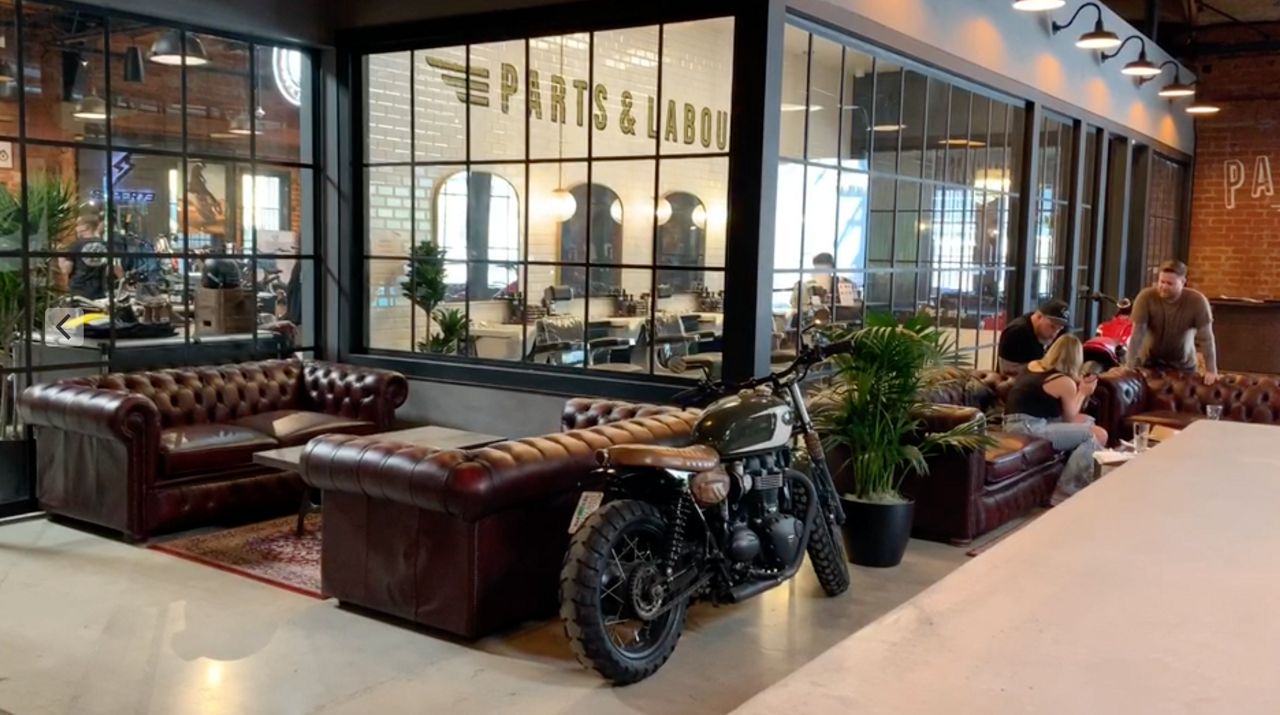 Van Someron and his wife Vikki are Brits who started the Bike Shed as an annual pop-up motorcycle show in 2013 that included food, a curated collection of bikes and services ancillary to the culture, like tattoos and barber shop services. They formalized the concept with a brick and mortar space in London a few years later, catering to people who enjoy the nicer things in life but don’t necessarily identify as bikers.

“They didn’t like going to dodgy motorway cafes to drink a cold cup of tea with a melted candy bar standing on the side of the street pretending to be in 'Sons of Anarchy' on the weekend,” Van Someron said. “They didn’t go to motorcycle shows or read biker magazines. That market wasn’t served at all.” 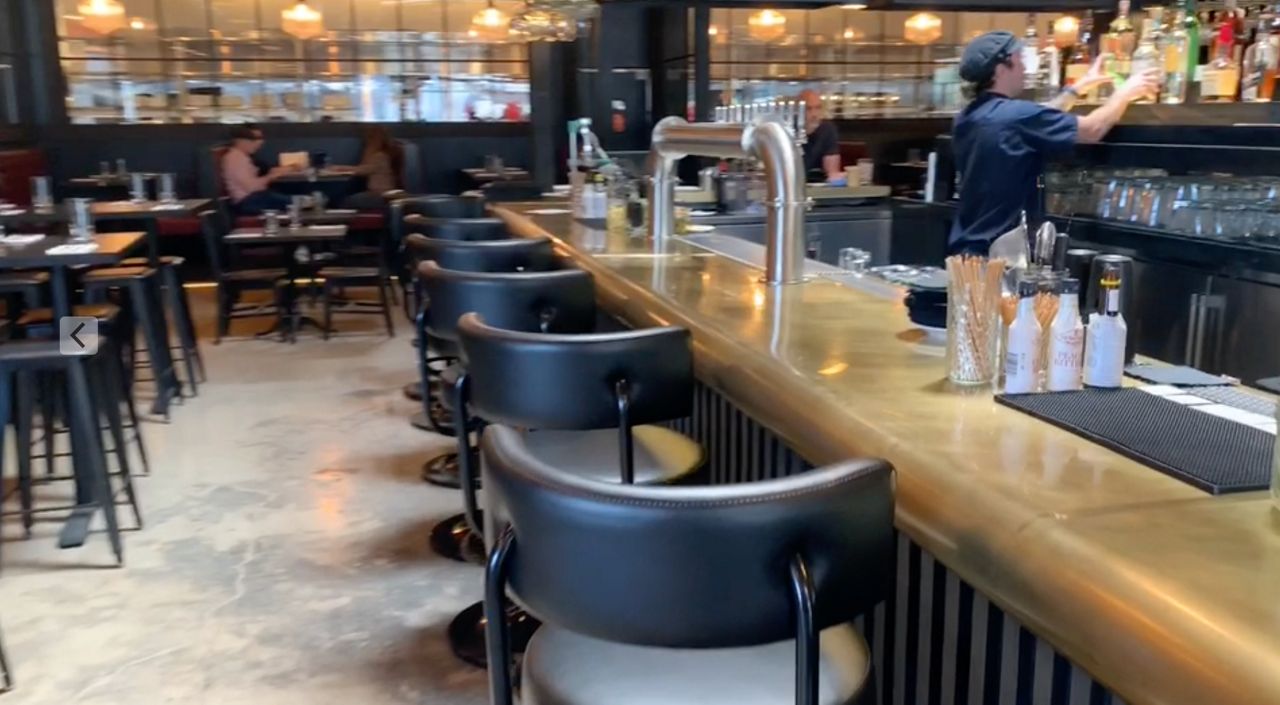 So the Van Somerens stepped in to fill the void for people who enjoy nice bikes and gear, good food, excellent service and a curated environment with a distinct two-wheeled theme and vibe. They bring that same sensibility to the LA venue — their first outside the UK — through a 350-seat restaurant with a classic, upscale feel. Trimmed like a motorcycle, in metal and leather, it serves up breakfast, brunch, lunch, dinner and drinks from 9 a.m. onward daily, with an Italian executive chef at the helm.

Designed as a social club for people to spend a few hours or an entire day, the Bike Shed offers men’s and women’s haircuts in its Parts and Labour barber shop and tattoos in its Paint Shop just a few steps away from a well-stocked bar. 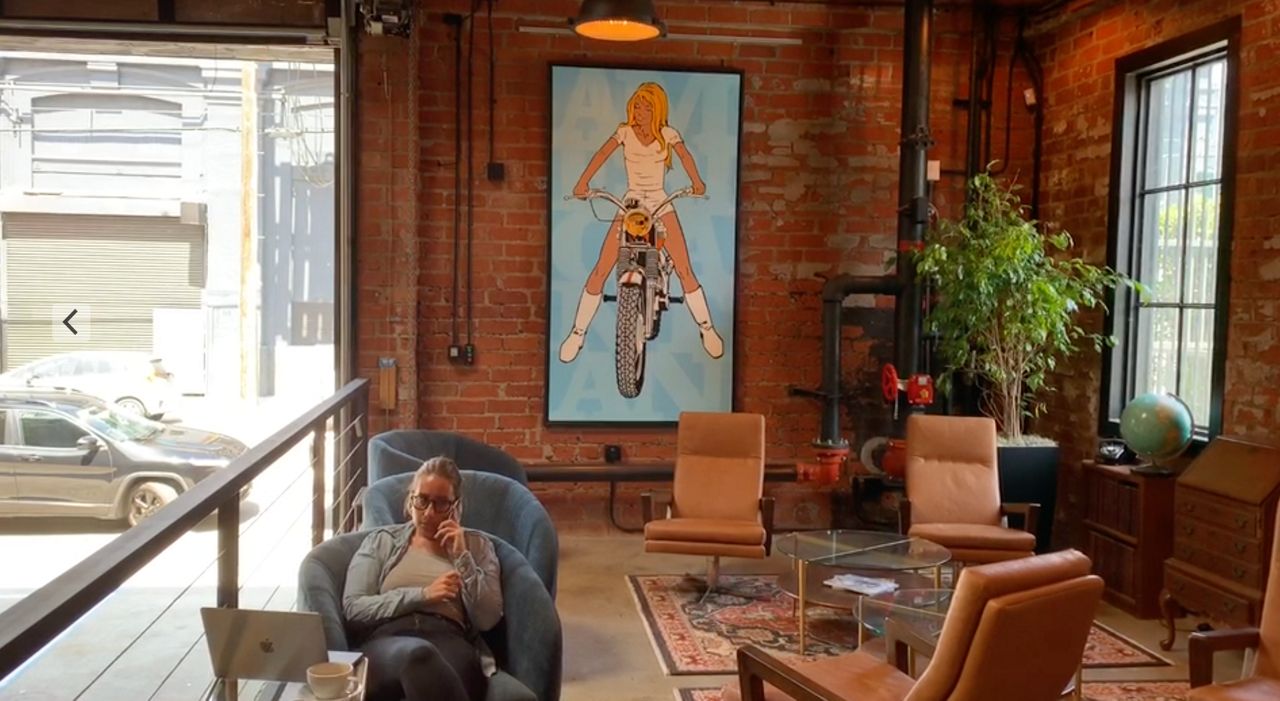 “We want people who are brand new to riding and we also want people who have been riding all of their lives to feel as though this is a natural home,” Van Someron said. In London, just 40% of Bike Shed patrons are motorcyclists. The rest are not.

In a previous life, the LA Bike shed space on Industrial Street was, like so many other converted buildings in downtown’s Arts District, a warehouse. Now it’s separated into distinct areas separated by nooks and crannies for lounging and decorated with huge paintings that celebrate the thrill of two wheels. 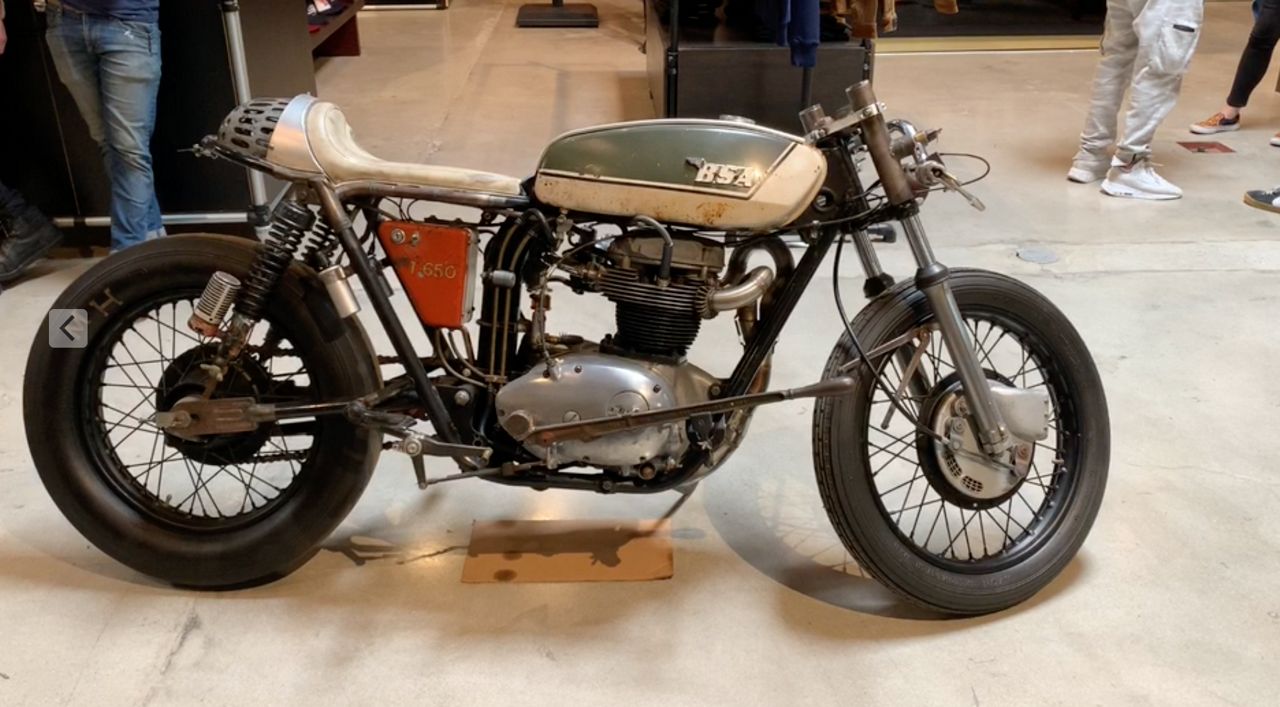 And then there are the bikes. About 40 different motorcycles are parked on the concrete, from vintage BSAs and BMWs to modern Indians and Ducatis.

“If you come into a place called the Bike Shed, there should be loads of motorcycles,” Van Someren said.

While the older bikes are décor, a lot of the newer bikes are for sale. Ducati, Royal Enfield, Indian and Super 73 are among the brands that not only have displays in the Bike Shed’s retail shop but will offer test rides through a local dealer. 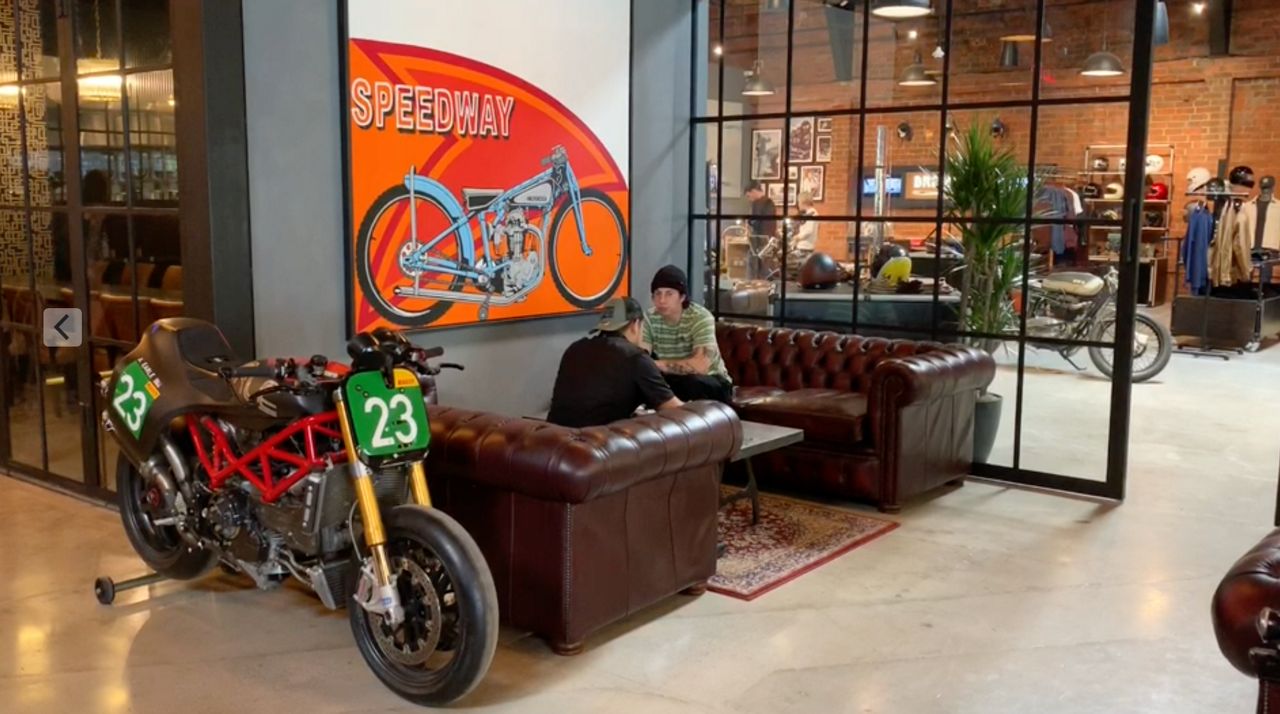 “To English people, I say it’s like Selfridge’s for bikes,” Van Someren said of the Bike Shed’s store. “To Americans, I say it’s kind of like Fred Segal or Ron Herman for bikes because all of the brands in here are actually concession.”

Many of them are British, including Bremont watches, Urban Rider apparel and Belstaff, which is using the Bike Shed as its West Coast flagship to sell classic field jackets and other goods. For riders, the store sells a variety of safety gear from boots, jackets and jeans to gloves, helmets and goggles. And for non-riders, there’s casual wear, like T-shirts, tennis shoes and sunglasses. 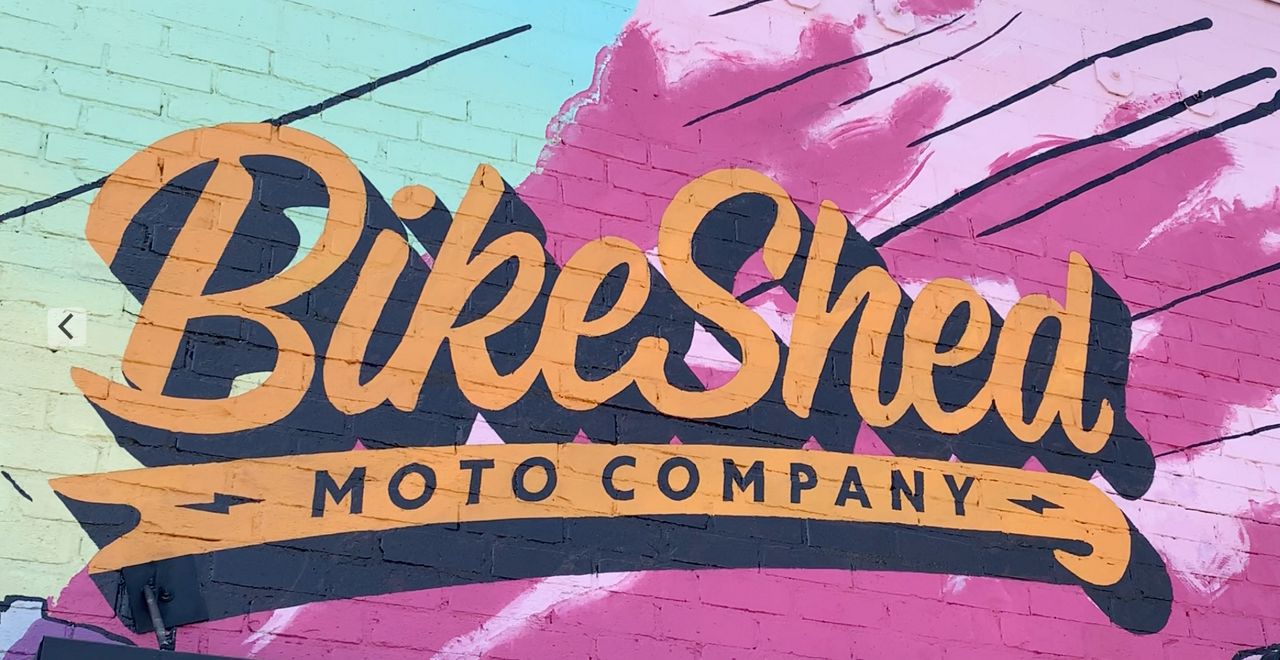 The Van Somerons are capitalizing on a more sophisticated, urban and classic motorcycle culture that’s grown in recent years through events like the Distinguished Gentleman’s Ride and the Bike Shed Moto Company. Bike culture content producers with YouTube channels and aspirations to become a sort of upgraded, motorcycle-oriented Hard Rock Café, the Van Somerons’ new Los Angeles location is the first of four they have planned for North America and another three they hope to open in Europe.

“LA is kind of a natural home for motorcycle culture in terms of brands, builders, bikers and scale, weather and roads,” Van Someron said. “Here, you can ride 365 days a year.”

In London, the Bike Shed occupies 12,000 square feet of space and draws 2,500 people each week to its 110-seat restaurant. LA, he said, “is the supersized version.”

Like London, the Bike Shed in LA includes a private club at the back that’s accessible to individuals who pay $1,500 to join. Elegantly furnished with velvet chairs and Chesterfield sofas, a fireplace crackling on one end, a chandelier dangling over the bar and whiskey lockers for patrons, it’s an English gentleman’s club within a club.

About 5% of the Bike Shed’s London customers are club members, which also grants them access to track days, group rides and camping trips. 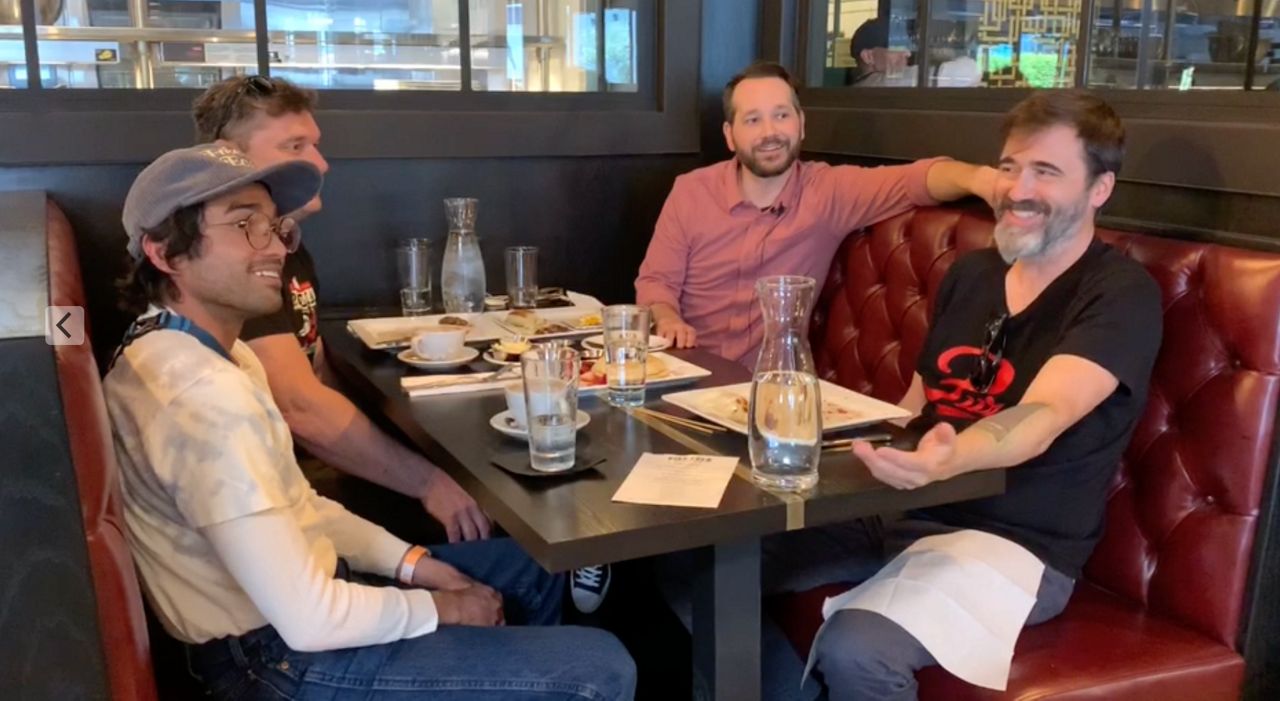 “The motorcycle community in Los Angeles is a pretty robust one, and we don’t really have a home or a center location,” said Chris Alves, who first learned about the Bike Shed while in London and is now a founding member of the LA location.

Earlier this week, he was enjoying a lunch of steak and eggs with a group of fellow Royal Enfield riders during the Bike Shed’s soft opening.

“It’s exciting to have a place that you can come get a haircut, have a drink, get some sweet gear and just hang out.”