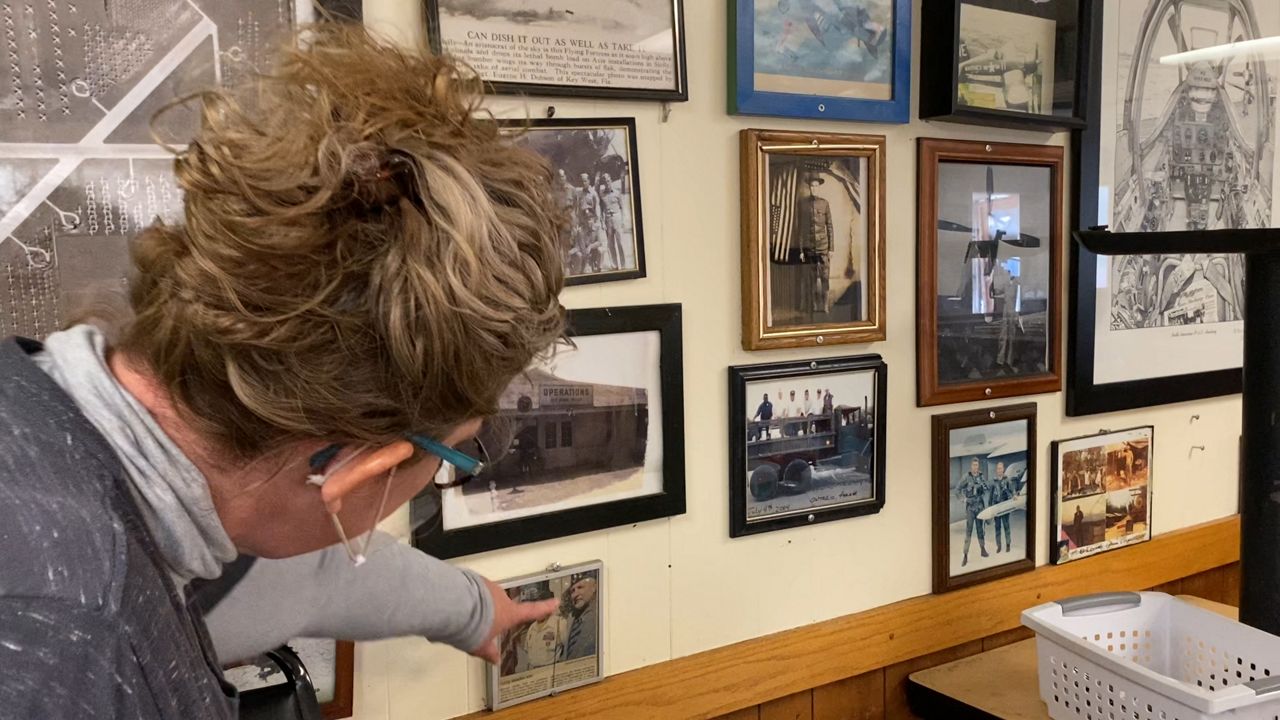 CHINO, Calif. — Some restaurants are known for their great food, others for their special ambiance. Flo’s Airport Café has been open in the same Chino location since 1962.

But after nearly a year of ups and downs due to the pandemic, things don’t just look different there, the employees say they feel different, too.

When she was 7 years old, Flo’s Airport Cafe was full of people Manager Roxanne Stache considered family. Today, it’s hard for her to see it empty.

“I grew up running through this restaurant. It’s heartbreaking," Stache said.

As the saying goes, if the walls could talk, they’d be chock full of stories. But at Flo’s, Roxanne shows it’s the furniture that has a lot to say.

"You can see the elbow marks on all of the countertops, all the way down and the plate marks where it’s just worn down from the history of friendship, and family, and food," she showed.

It's the history of Chino. 60 years ago, the small town was known for its dairies.

Every morning the dairymen would have their breakfast at Flo's, making deals and selling cows over eggs and bacon.

"There’s marks on the floor from where their feet were and where the table was but this is history, this is where all the history of Chino was made," Stache explained

Most of their customers have been eating here for decades, but Roxanne said it isn’t the famous homestyle cooking that keeps them coming back.

A family that held her up at her lowest point.

"One of my sons was recently killed and he worked here for a little bit and when he was killed everybody here embraced me," she explained.

Roxanne said there were more than 500 people who showed up to her son’s services, mostly employees and customers from Flo's Airport Cafe.

David Poling has been coming to the cafe for 25 years. Now he meets his friend Lorenzo there twice a month, just to catch up.

"We meet here often as some place to come and be able to talk because every time we come here, it’s been the atmosphere that makes it comfortable for us," Lorenzo explained.

The same is true for one couple that has been coming here for 30 years.

As truckers, Mike and Chloe Compton drive from Michigan to New York and across the country to the West Coast they never miss a trip to Flo’s when they’re in California.

"Homecooking. Nothing else to say but homecookin’. And home atmosphere,” said Mike and Chloe Compton.

An atmosphere that Roxanne says was nearly impossible to recreate when they were only allowed to serve take out through a window.

"It’s the history here and the customers have said we want to support you, but we don’t want to eat from Styrofoam. We come in to see you guys. We come in to be part of the family," Stache cried. "You know, they love us as much as we love them.”

Though they’re good, it was never quite about the biscuits and gravy. "I wish I could hug you!" Stache said to two customers.

It’s the friendship, a place to go where they know they'll be welcomed with open arms.