Every Bite Matters at Nancy Silverton's Pizzette in Culver City

CULVER CITY, Calif. — The pizzas at Nancy Silverton’s newest restaurant are small but crafted with the same high-quality ingredients and ingenuity as the offerings at her Michelin-starred Osteria Mozza.

Crafted with dough baked on the spot in a wood-burning oven, the $10 doll-sized pizzas (as Silverton calls them) are part of a mouth-watering menu that also features $14 stuffed pizzettes (or sandwiches) crafted from Italian ingredients, $14 salads made with finocchiona and other salami varietals, and $4 Nancy’s Fancy mini gelato pints in flavors such as salted peanut butter and butterscotch budino.

“I never dreamed of having a quick serve restaurant in a food court, but I’m always willing to look at what the possibilities are,” said Silverton, who was first approached about putting together a pizza concept two years ago. The developer, Rick Moses, had reached out to her after purchasing the former Citizen newspaper building on Culver Blvd. with the idea of creating a neighborhood, food-centric gathering place. 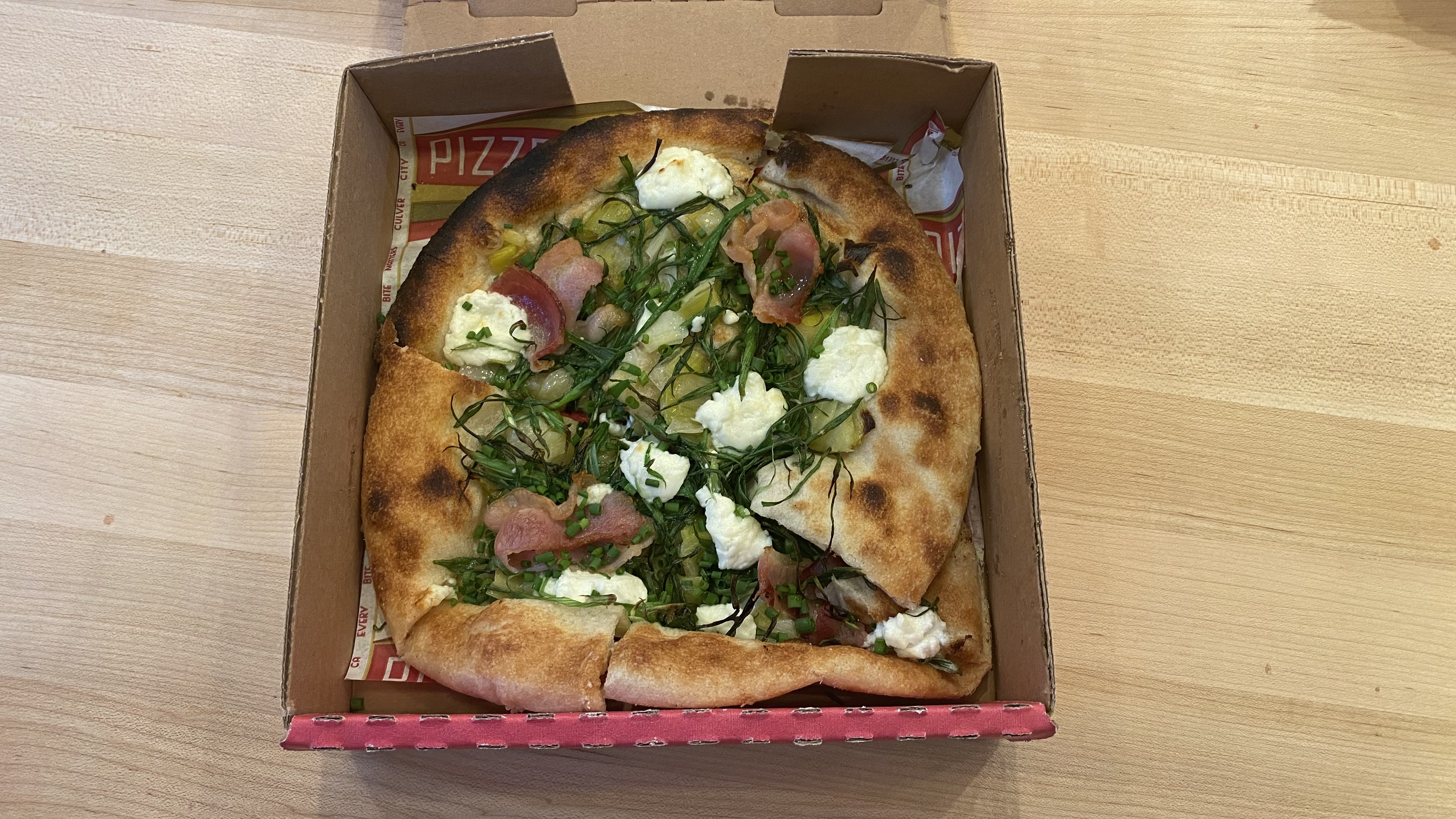 Pizzette is one of three restaurants opening Wednesday in Citizen Public Market, along with the coffee shop Goodboybob and the WEHO Sausage Company. The coming weeks will add Jolly Oyster, a casual Mexican restaurant, and a burger joint.

Intrigued by the building’s repurposing and inspired by Culver City’s addition of multiple new office buildings in the area, Silverton said the potential is what sold her on the project. 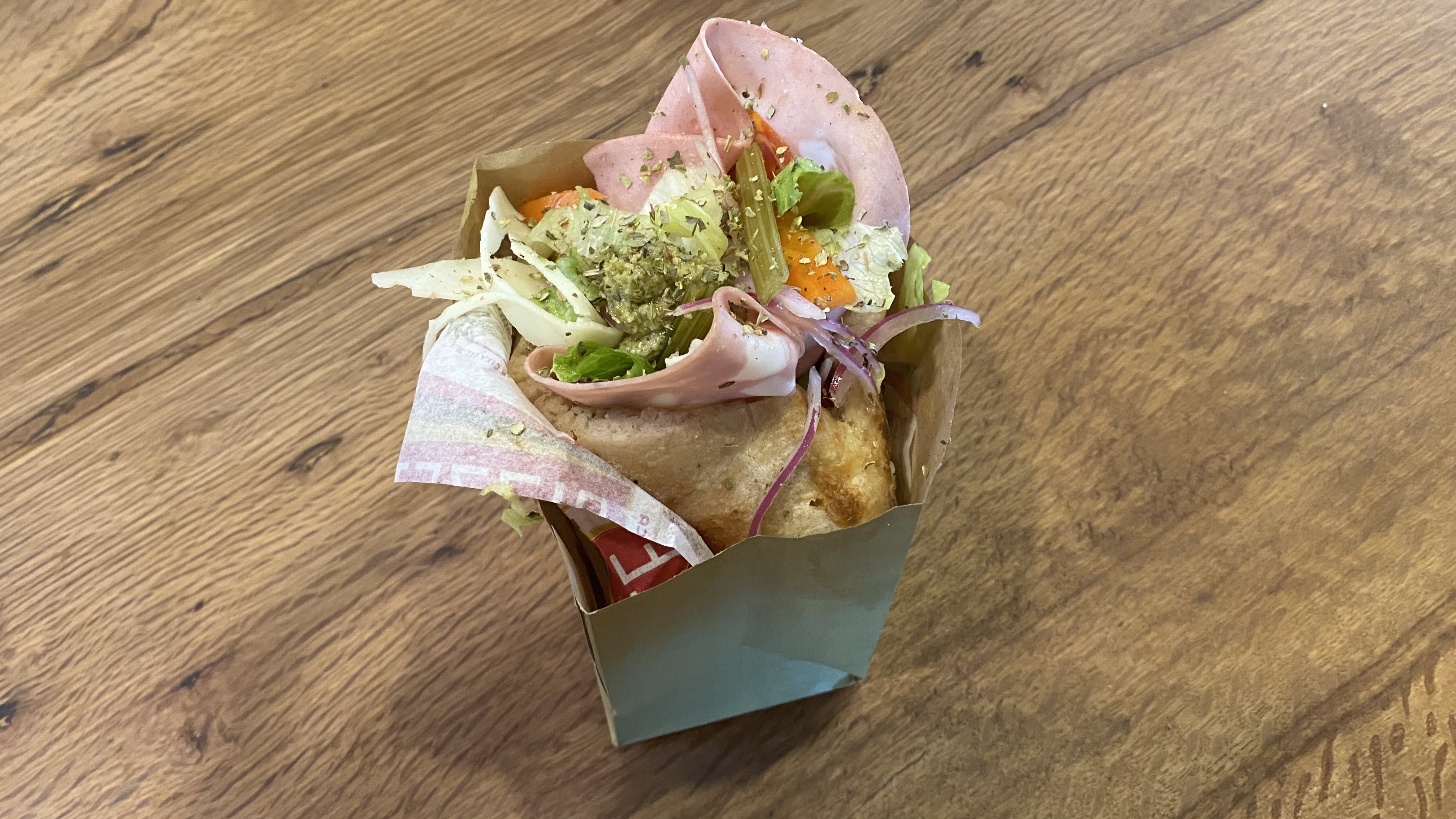 She already serves pizza at two of her other restaurants — Pizzeria Mozza and Mozza2Go.

“That was not something I wanted to replicate,” said Silverton, who started thinking about the neighborhood and new office spaces when she came up with her big idea of small pizzas that would fit on someone’s desk while they worked at a computer.

She decided on the name Pizzette, pronounced peet-ZEH-tay, and then the concept stalled, Silverton explained. It was only on a trip to Israel, with fellow food icon Ruth Reichl, that the rest of the idea fell into place. It was one o’clock in the morning, and they were hungry, so they went to a restaurant and ordered sandwiches. 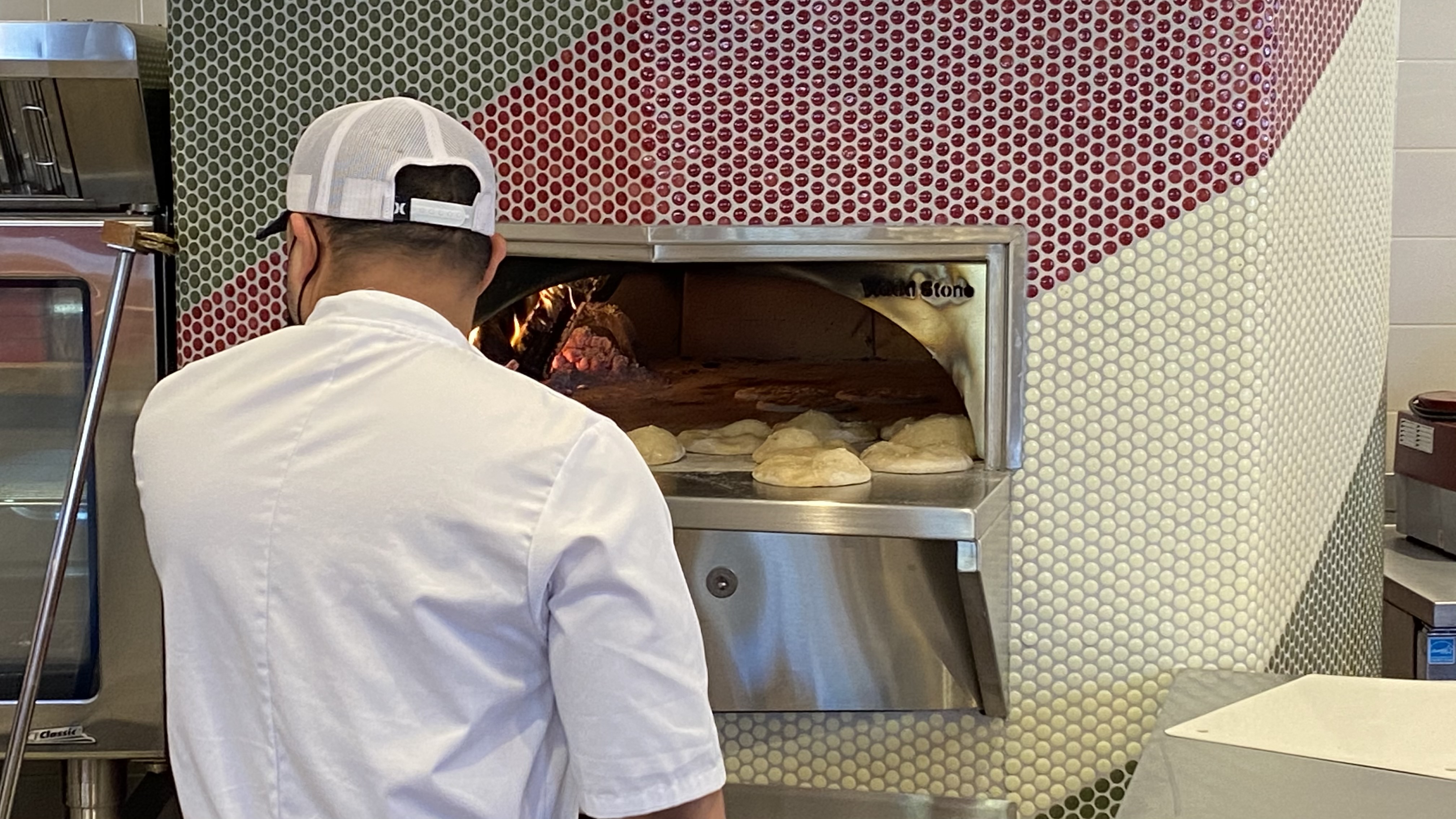 “I don’t know if we were starving, or if it was late or we were drunk. They were the best sandwiches I ever had," Silverton said of the popular roasted eggplant, hummus, egg, and dill pickle concoction known as a sabich — a version of which she is now serving at Pizzette.

“What it taught me in those bites was how much potential there is for making a sandwich where you stuff it from above and tuck things into different corners, so every bite tastes different,” Silverton said.

Unlike a horizontally composed sandwich, where every bite is designed to taste the same, every mouthful of one of Silverton’s stuffed pizzettes is a surprise, she explained.

"I love that. You don’t get bored with it. Plus, you don’t want to share it because you might be missing out on that next bite." 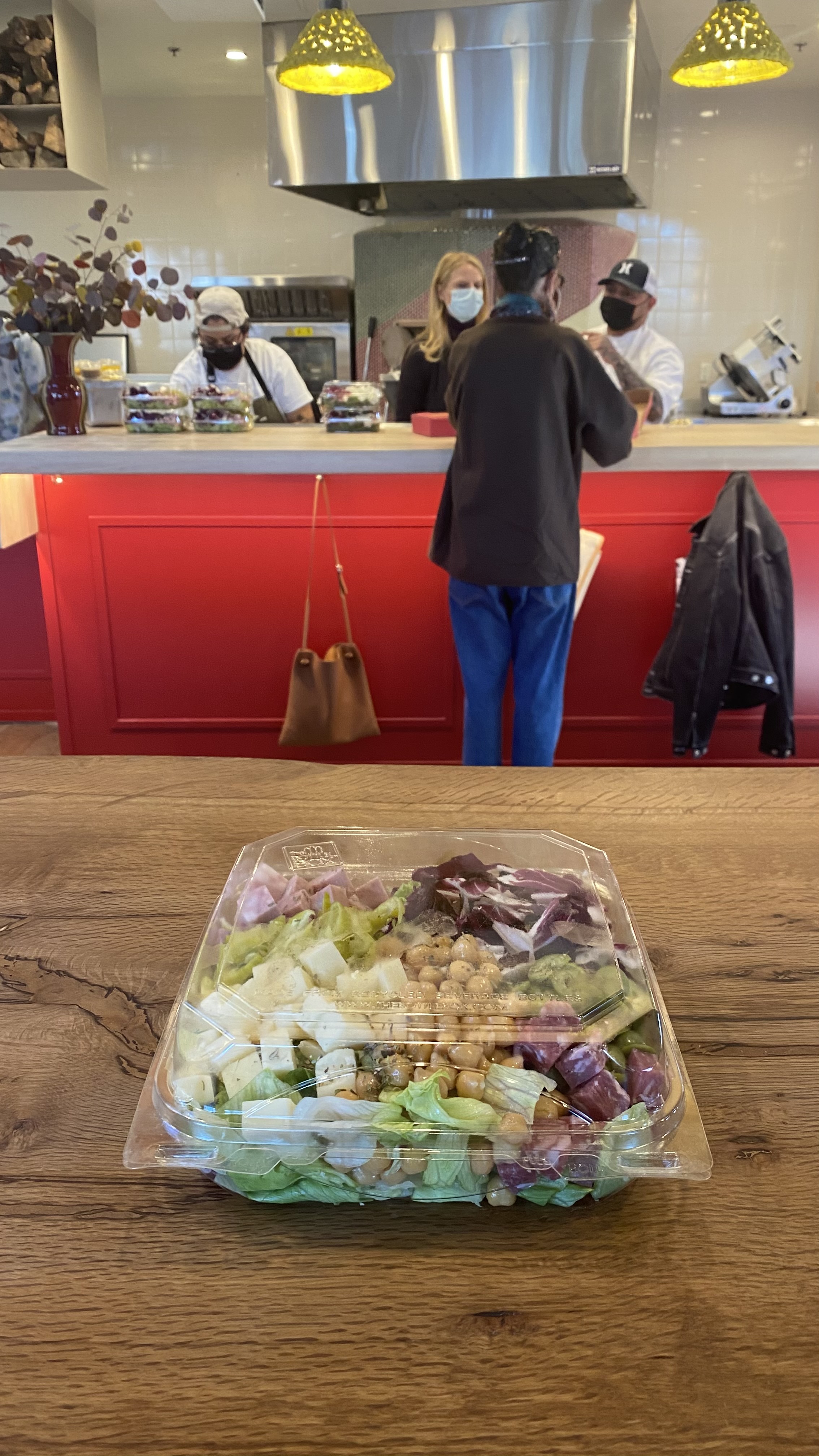 The roasted eggplant sandwich is the most complicated on the restaurant’s menu. It has 12 ingredients, including a pickled mango sauce called amba, the garlic paste toum, and a coffee-stained egg that is cooked in coffee overnight, just like in Israel on the night before Sabbath, so it can be served on the day when no one is allowed to cook.

Silverton is known for her immense attention to detail when sourcing ingredients. The cruschi peppers she includes in her mozzarella sandwich, for example, are a specialty she stumbled upon in the Basilicata region of Italy almost two decades ago. A type of red pepper that is dried and then fried until crunchy, it sits alongside fresh rounds of mozzarella marinated in pesto. 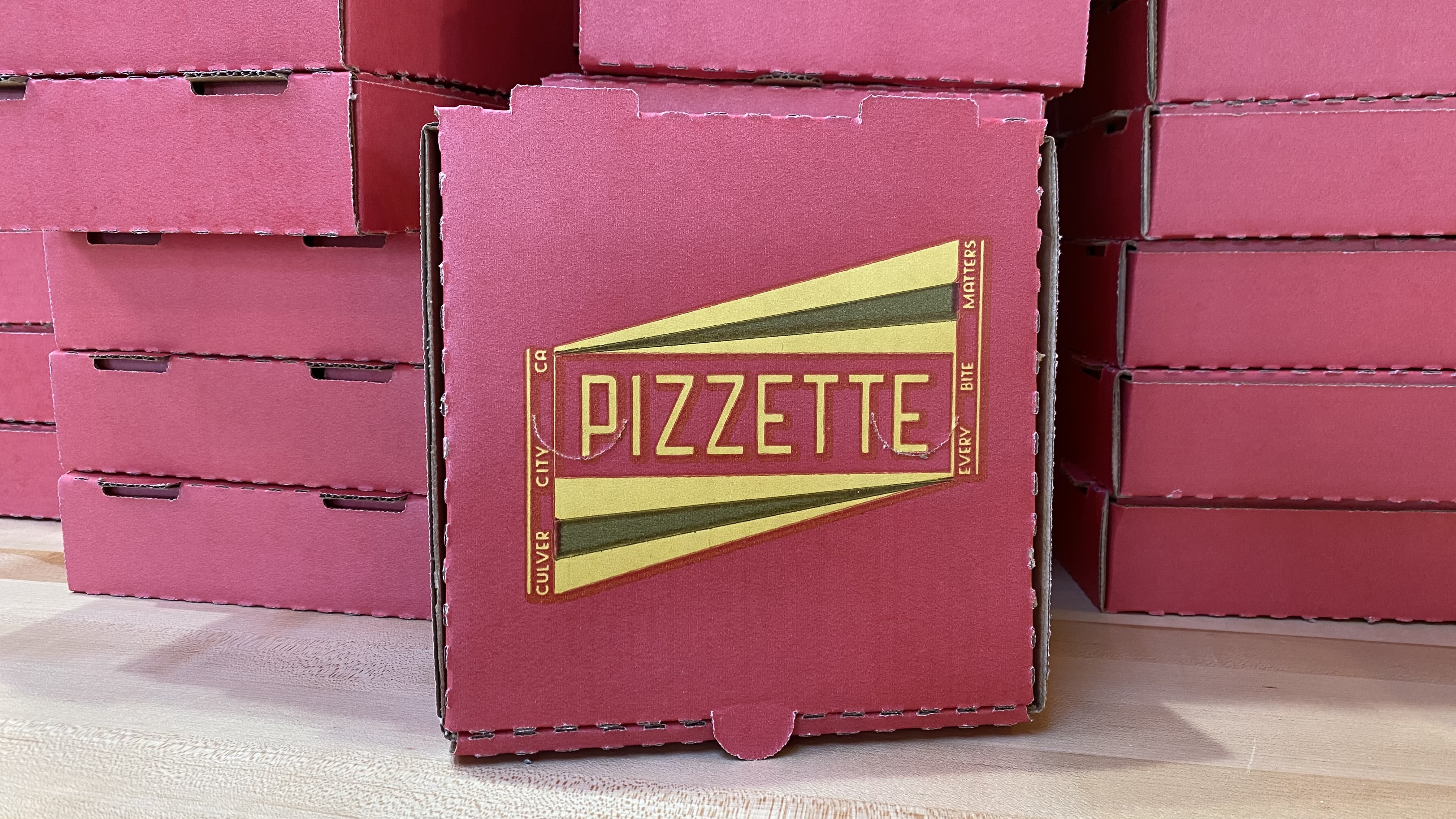 “I’m not innovative,” said Silverton. “I feel like maybe I think things through. I know my flavor palate. I always know where I want to get to. I don’t give up until I get there, and when I can’t get there, I give up.”

That palate is distinctly Mediterranean.


“I like garlic. I like olive oil. I like anchovies, capers, tomatoes,” she said, referencing concentrated, flavorful staples of her menu, not only at Pizzette, but at her numerous other restaurants, including Chi Spacca and the Barish Italian steakhouse in the Roosevelt Hotel. 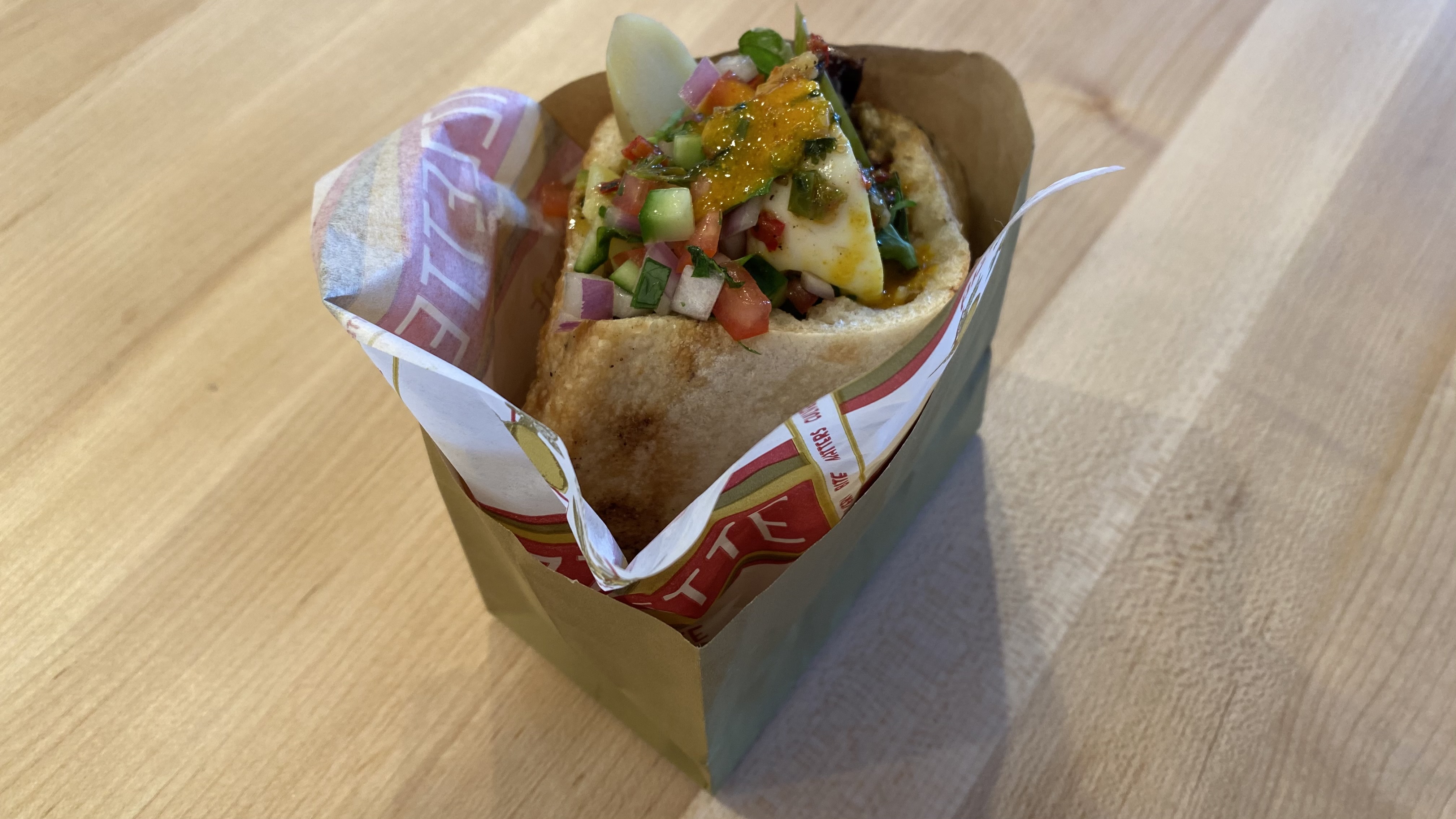 “How could you not add that to everything, including cereal," she said. "Amba is new to me, but I was able to help one of my sandwiches with that. I’m not innovative because I didn’t invent that combination of eggplant and amba. I just recognized that it’s good.”

During a small event for Silverton'sfamily and friends last week, Jason Asch sampled the Quattro Salame sandwich, with an Italian dictionary’s worth of ingredients, including finocchiona calabrese, mortadella, coppa, provolone, iceberg, giardiniera, and green olive tapenade — all of it tucked into a pita-esque bread and served in a short paper sack.

“I hope it ruins every other submarine sandwich that you get, Jason,” Silverton quipped as he took a bite. “That mortadella doesn’t taste like any other mortadella you’ll have.”