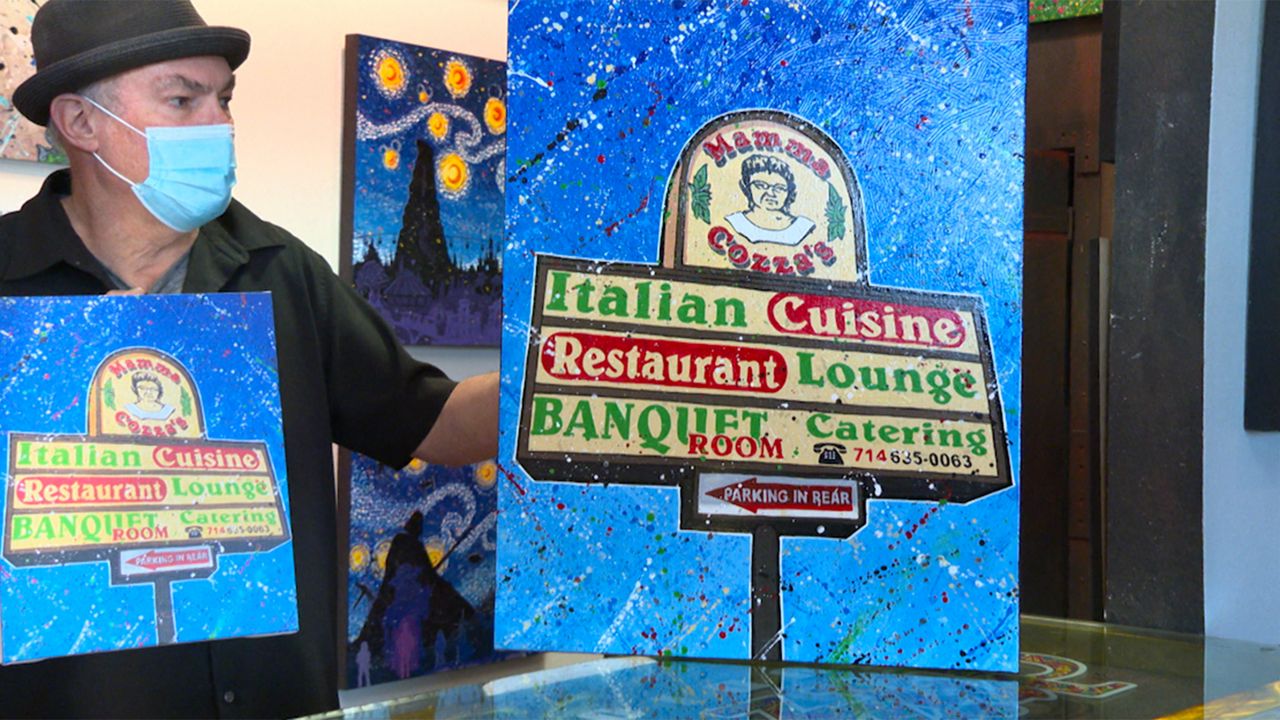 ANAHEIM, Calif. — Walking around Robert Holton's Anaheim gallery is like seeing all of your favorite brands, teams, and iconic signs in one place.

While he's painted for businesses recognized worldwide, as the pandemic began impacting his favorite local spots, he chose to use his unique drizzle, tactile style to paint their logos.

"A few of my friends saw what I was painting, and they go, 'Hey, how about a print?' I go, 'Yeah, a print would help bring some of that restaurant vibe into your home or something. More so, though, how can I help the restaurants? Well, we need to support especially the smaller restaurants in any community, wherever you're from. Support the smaller restaurants. Help them keep moving forward in any way," Holton said.

Holton's business has taken a huge hit since the pandemic began. He'd typically participate in the Sawdust Festival for over 80 days out of the year and other beach shows. Over the past 12 months or so, his shows have either been affected by the pandemic or canceled altogether. Holton has seen businesses — restaurants in particular — struggle the same way his business has. It gave him an idea. He decided to paint their logos and sell the small, 11-by-14-inch canvasses for $60 and donate $10 from each sale back to the restaurant.

"Hopefully they can give them to their, give a few dollars to their staff, you know the waiters and wait staff. Nobody's making the money they used to. How is everybody surviving? So, I think a little bit goes a long way," Holton said.

Holton was diagnosed with multiple sclerosis eight months ago, damaging nerves between his brain and his body. He now relies on a cane to get around.

"I think especially now with what we're going through, it's helped me to realize, and my wife also, that every day is a gift," Holton said.

He's using that gift to give back to his favorite local spots, like Mama Cozza's on Ball Road.

Frank Cozza's dad was an Anaheim police officer and started the restaurant. He and sisters have since taken it over, and it's family-owned businesses like theirs that Holton is hoping to help out the most.

"The sign has been up since, goodness, the 1970s, so it's nice to have that, and then people go, 'I want something from the past, and I want to have it in my house,'" Cozza said.

Holton didn't always paint signs. He used to make them. His art studio is behind the sign shop he owned for three decades. Today his son runs it.

While he waits for the pandemic to end, Holton continues to find peace in his prints.

"We all see there's a light at the end of the tunnel, but just gotta get through this tunnel," he said.

Visit Drizzleart.com or @drizzlelaguna on Instagram for more on Robert Holton's work.