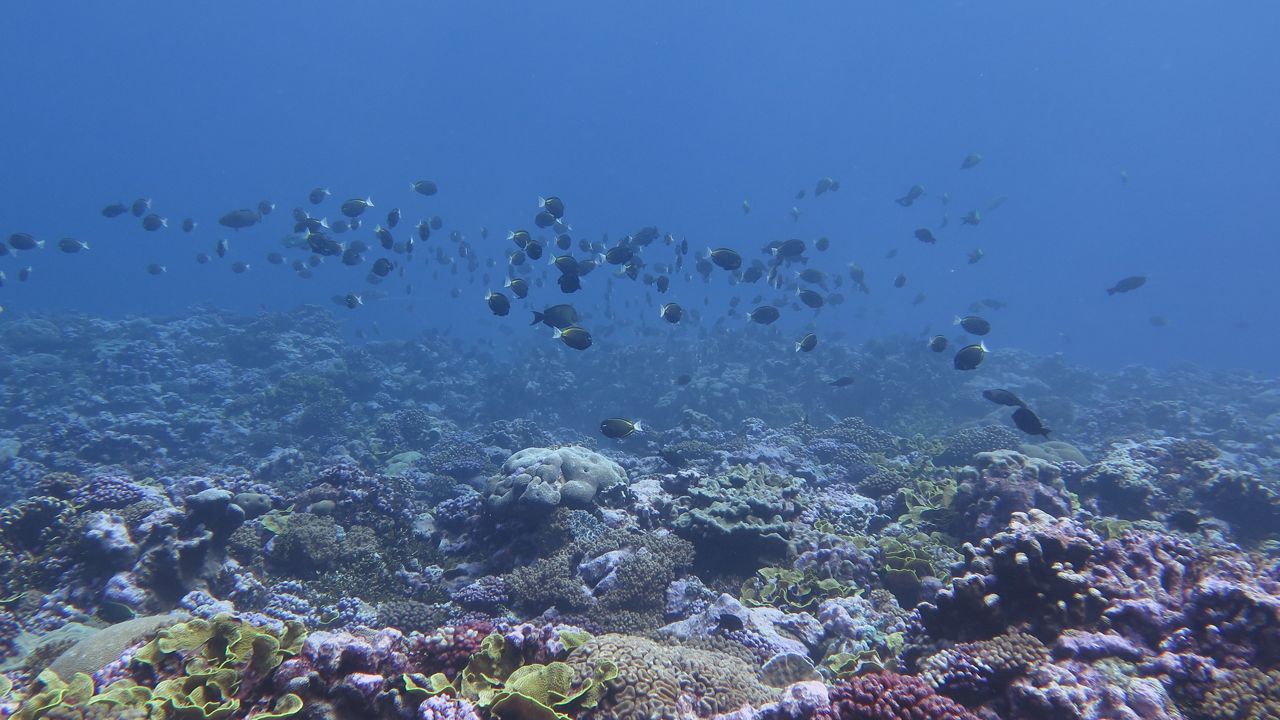 (Courtesy of Scripps Institution of Oceanography)

SAN DIEGO — A new 10-year study from Palmyra Atoll in the remote central Pacific Ocean shows that reefs outside the reach of local human impacts can recover from bleaching.

Dr. Jennifer Smith is a professor at Scripps Institution of Oceanography. With support from The Nature Conservancy and the U.S. Fish and Wildlife Service, Smith launched a long-term monitoring effort in 2009 at Palmyra Atoll, located 800 miles south of Hawaii. Seeing a coral reef untouched by humans was so powerful it brought her to tears.

“Honestly, the first time I jumped in the water I cried underwater because I couldn’t believe that a reef could look like that today,” Smith said.

More than 1,500 underwater photos have been taken over 10 years, and researchers have analyzed the changes. This latest study found that reefs outside the reach of human impacts can recover from coral bleaching.

When water is too warm, corals will expel the algae living in their tissues, causing the coral to turn completely white and putting them under more stress and at greater risk of dying.

The largest global coral-bleaching event ever documented struck the world’s oceans in 2014 and lasted until 2017. The onset of this abnormal whitening condition spawned widespread gloom-and-doom reports about its calamitous effect on Australia’s Great Barrier Reef and more general predictions of coral reef extinction by 2050.

“I think most people are really fatigued and frankly kind of given up on the ability to do anything to save coral reefs or other marine ecosystems,” Smith said. “And so to have a case study where we can see that the reefs on Palmyra today probably looked the same way they did, you know, several decades ago or even a century ago. Even when it gets hit with a warm water event, there are impacts, but those species and the individuals that are there are able to recover really quickly.”

Doctoral candidate Adi Khen is the lead author of this study. She has been able to merge her skills as a scientist with her talent as an artist. A self-taught digital scientific illustrator, Khen visited Palmyra Atoll in 2020 as part of an internship with The Nature Conservancy in science communication.

Using simple image-analysis tools and digital tracing, her team identified all bottom-dwelling organisms present in the photo plots to see if they were increasing or decreasing in abundance. Khen said it takes from one to two hours to process each image.

She spent thousands of hours digitally tracing each coral in every photo, along with help from a team of graduate and undergraduate students.

“It meant a lot to me,” Khen said. “Doing the tracings are very tedious, but they’re also very precise and accurate and my favorite part is getting to watch natural history unfold right before my eyes.”

While the finished product might look like a piece of abstract art, Khen believes the study shows the value of looking at long-term trends amid climate change.

“Even though climate change is a serious threat to reefs worldwide, after hearing about all of the death and destruction and ecosystem collapse, it’s really inspiring to see nature bounce back and thrive and it shows us that nature is capable of that if we give it a chance,” she said.

Even with these encouraging results, Smith said her lab will stay focused on finding solutions to address greenhouse gas emissions.

“Global warming is a very significant threat and Palmyra’s reefs are not immune to that,” Smith said. “I definitely don’t want to use this as an excuse to avoid dealing with climate change.”

Experts said you can help protect coral reefs in your everyday life by using reef-friendly sunscreen, recycling and disposing of trash properly and using more environmentally friendly modes of transportation.