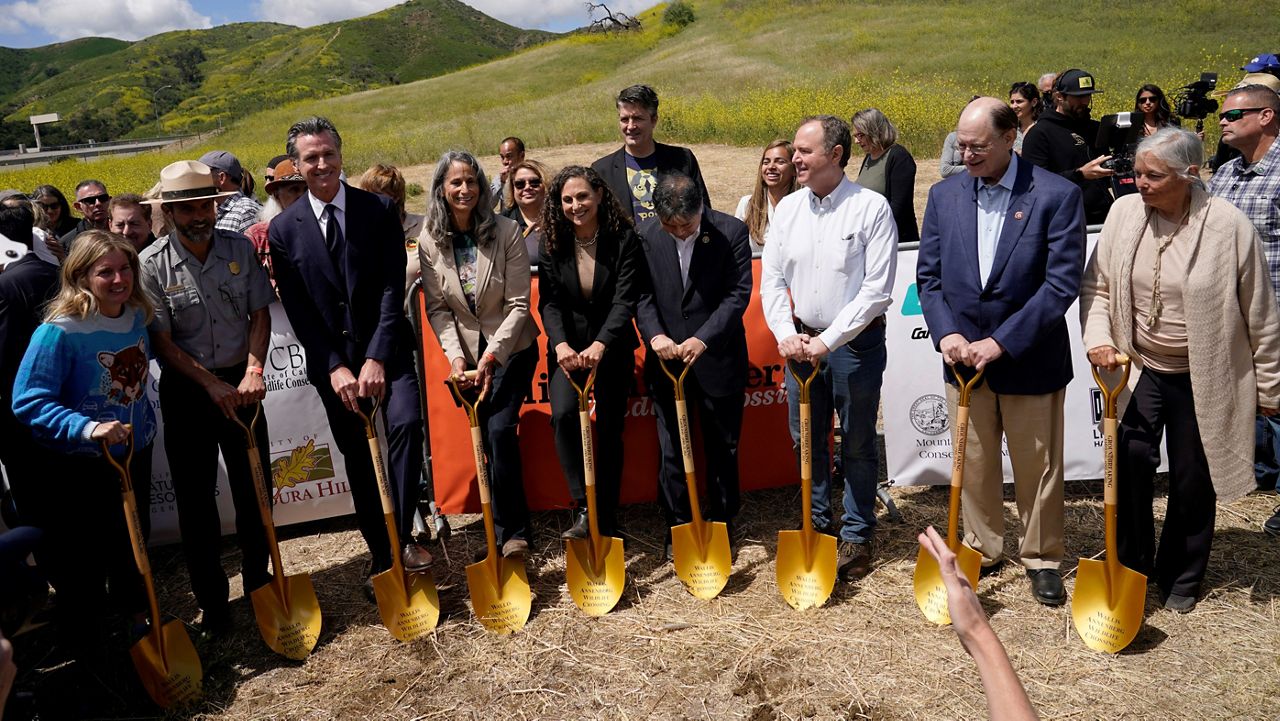 AGOURA HILLS, Calif. (CNS) — Coinciding with Earth Day, Friday marked the official start of construction on the much-anticipated wildlife crossing over the Ventura (101) Freeway in Liberty Canyon designed to provide relief for landlocked mountain lions and other animals in Southland mountains.

The roughly $85 million Wallis Annenberg Wildlife Crossing is envisioned as the largest crossing of its kind in the world, spanning 210 feet over 10 lanes of highway and pavement. It is also the first to be significantly funded through private donations along with public support.

The Wallis Annenberg Wildlife Crossing is being developed following 20 years of studies from the National Park Service that found roads and urban development are deadly for animals trying to navigate the Los Angeles area. Urban development has also created islands of habitats that can genetically isolate the region’s animals.

Beth Pratt, regional executive director of the National Wildlife Federation — which led the campaign for the wildlife crossing — said:

“We are so honored and celebrating with you all who looked at this impossible dream and like me said, 'Not on my watch,’ we are not going to let this mountain lion population go instinct on our watch.”

The start of construction comes one day after a mountain lion was fatally struck by a vehicle on the San Diego (405) Freeway in the Brentwood area, highlighting the need for safe routes that Los Angeles’ diverse wildlife can access.

“This week was supposed to be one of celebration as we mark the groundbreaking of a wildlife bridge in Agoura Hills. Instead, we’re saddened by the violent death of yet another mountain lion,” J.P. Rose, a senior attorney at the Center for Biological Diversity said Thursday. “These tragedies are preventable if California invested in more wildlife crossings, which protect both wildlife and people from dangerous collisions. I hope our leaders in Sacramento take a serious look at the Safe Roads and Wildlife Protection Act, a sensible piece of legislation that will bring more wildlife crossings to the state.”

The mountain lion’s death Thursday in the Brentwood area was the second in less than a month. A vehicle on Pacific Coast Highway killed another lion in Malibu on March 23.

Researchers have estimated that the mountain lion population in the Santa Monica Mountains could become extinct within 50 years without an influx of genetic diversity. The lions are largely isolated because of freeways that act as barriers to movement across the region. The crossing aims to provide a connection between the small population of mountain lions in the Santa Monica Mountains and the larger and genetically diverse populations to the north.

“It’s about restoring a sense of balance to our natural world. It is about bringing more attention to an ingenious solution so urban wildlife and ecosystems like this one can not only survive but thrive,” said Wallis Annenberg, chairman of the Annenberg Foundation and the wildlife crossing’s namesake.

The crossing is named for Annenberg, as his foundation is a major financial contributor to the effort. The effort is a public-private partnership that includes Caltrans, the National Park Service, the Santa Monica Mountains Conservancy/Mountains Recreation and Conservation Authority, Resource Conservation District of the Santa Monica Mountains and the National Wildlife Federation.

“Thousands of people from around the world have rallied to our side and they share in this tremendous victory with us. Together, we’ve raised $87 million to date. That puts us just shy of fully funding construction, so there’s still time for you to join as we work to endow the National Parks’ research, to support the crossing’s ongoing maintenance and also sustain a host of California-focused environmental education and engagement programs to ensure a next generation of conservationists and that this wildlife crossing project, the Wallis Annenberg Wildlife Crossing — the largest to-date — is just the beginning,” said Dirk Sellers, vice president for philanthropy of the National Wildlife Federation.

The design team is being led by Living Habitats LLC.