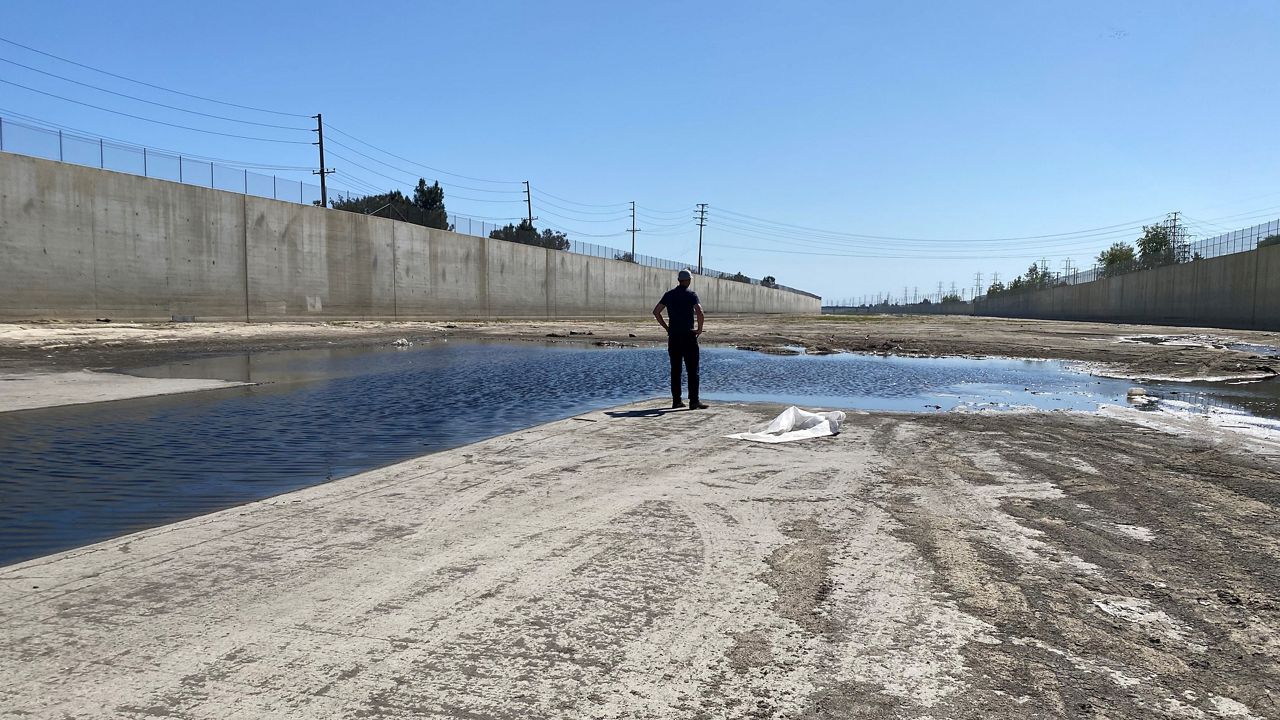 FOUNTAIN VALLEY, Calif. — Scientists are seeing beaches eroding, and as cities, the state, and other entities look for potential ways to help fill-in the disappearing sand to protect shorelines, a researcher from the University of California, Irvine said help might be found in flood control systems.


Brett Sanders, a professor of civil and environmental engineering at UCI walked along a flood control channel in Fountain Valley and scooped up a handful of gritty material piled up on the side of where the water flows through.

“Look at this. This is really nice sandy material. This is the kind of material that would be really nice on a beach,” he said.

Sanders said the sediment could be used at beaches with eroding shorelines, like the stretch of sand north of San Clemente. Instead, the sand is stuck along the concrete that makes up the Santa Ana River, an unintended consequence of a flood control channel, according to Sanders.

“We’re seeing a reduction of sand delivery to the coast. At the same time, we are seeing an increase in the rate at which sand that the sand is being washed away from the coast. And that’s bad news for beaches,” he said.

He said flood channels like the Santa Ana River were built in response to some historic storms.

“Southern California had experienced some severe floods in the 1860s and again in the 1930s. You couldn’t develop the area, you couldn’t grow and economy if the economy was going to be wiped out by a flood every 30 or 40 years,” he said.

Maintenance inspector Ryan Kolakowski recently checked out certain sections of the Santa Ana to look for sediment pile-ups, like one that had gathered near Slater Avenue in Fountain Valley.

“We removed all the sand and sediment from last April and May (2021). So this is all fresh deposit, deposited from this storm season,” said Kolakowski.

Kolakowski took pictures of the sediment to coordinate the upcoming cleanup for the 2022 storm season.

Every year Orange County Public Works crews brings in equipment to scoop up the sediment and sends it to a sorting site called Miller Basin in Anaheim. At Miller Basin foreign objects, such as a random portion of a walker, are removed.

He said once the sediment is sorted, some of the sand is used for construction projects and some ends up going to beaches in Newport Beach, San Clemente and Huntington Beach.

“The sand and sediment you see here, if we didn’t remove it every storm season, it would continue to collect. It would basically continue building up,” Kolakowski said.

He said the structure was built to keep people and places safe.

Sanders said there could be a different way to do things that would require less manpower while helping disappearing beaches.

“So right now, our dams are not designed to let sediment go past them. They don’t have what we call a sediment bypass,” he said.

Such technology could be used at the Prado Dam, but he said that would cost money to retool the existing infrastructure.

“When we have a storm event and there’s water flowing here at a fast speed, we want to take advantage of that water so that it isn’t just moving water, but it’s also moving sand towards the beach,” Sanders said.

While the researcher said the flood control channel is amazing and awe-worthy for the engineering it took to build such a structure, he feels there has to be a better way to do things that accommodate for both flood safety and sediment flow.