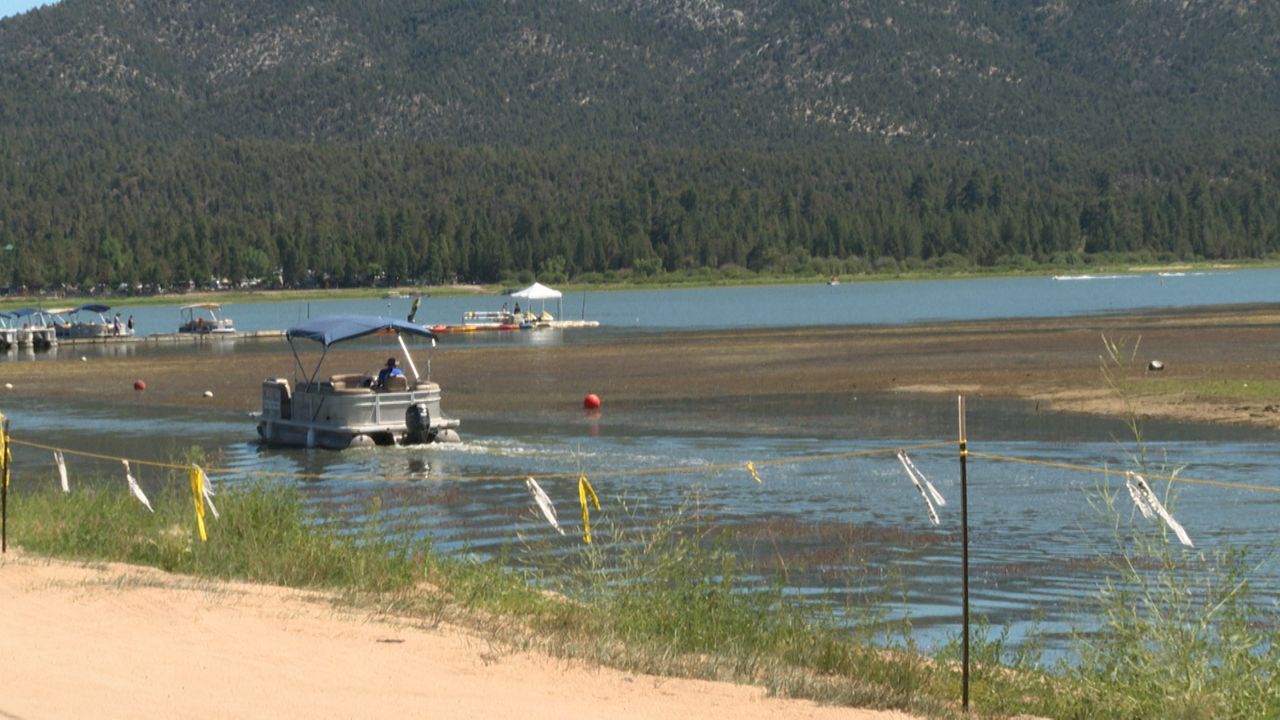 BIG BEAR, Calif. — Despite the heavy rains and record snowfall this past December, the Department of Water Resources said California remains in a drought. The next few months will be telling, especially for an area like Big Bear, which receives its water in the form of rain.


The ongoing drought has had many impacts on Big Bear Valley, especially for businesses that rely on the lake.

Big Bear Marina owner, Steve Fengler, said that during last spring and summer seasons, he had to physically move his docks and storefront to deeper water.

He pointed to a building several hundred yards from where he was standing and said, “That typically should be right here.”

Fengler was pointing to the side of ramp he was standing on that leads to a dock at the end of Paine Court in Big Bear. He pointed to a faint blue line just to one side of the ramp and said if Big Bear Lake was full, the line would be where the water would be.

From spring of last year and through this winter so far, the lake has been between about 13 and 16 feet from full. (See the latest and historical lake levels here.)

Even after the recent storms, the lake currently sits at about 15 feet below full as of January 2022.

Because of the ongoing shallower water, Fengler and his team have had to physically move his business by pulling up metal poles jammed into the bottom of the lake and floating the docks and buildings about five football fields out toward the center of the lake.

“Has it been a bit of struggle? It has. But we’ve just adjusted to what we have,” said Fengler.

In the nine years Fengler has owned Big Bear Marina, the lake has never been full, and because of such, he has become strategic at figuring out just where to locate things for the season.

“Probing around and figuring out where the water is. And so far, so good,” he said.

He uses tools like a stick with markers at every foot to find a spot. Sticing it into the water, he explained, “And you just put it in the ground and right here. We’re almost at seven feet right here.”

Fengler said that spot would allow him to make it through the season, which lasts April through October. He will also not have to move things around again.

He said the lowest lake level was in 1977, when it was about 18.4 feet from full. Some estimates put the lake at about 72 feet deep at its fullest.

Additionally, there have been logistical issues for businesses and the district, which have had to move the emergency dock further out.

“As far as water quality, it’s difficult because we’re evaporating or distilling the water out of the lake, and it’s leaving a lot of nutrient behind which you can end up with algae bloom and weed problems and things like that,” he said.

The community has dealt with it before, but the only real solution is more water in the lake, and Stephenson explained the only source of water in Big Bear is what Mother Nature provides.

“To fill the lake we do a rain dance,” he joked.

Fengler leans on hope that the lake he loves will be full again.

“We’re optimistic it will and history shows us it will,” he said.

If he has to move things around this upcoming season, Fengler said so be it because it is worth it to help families continue to make memories in Big Bear like he did growing up.

“That’s a fulfillment for me and my wife, Shelly,” he said.

He said you cannot beat that feeling and cannot beat being in this environment that he both calls his office and his home.