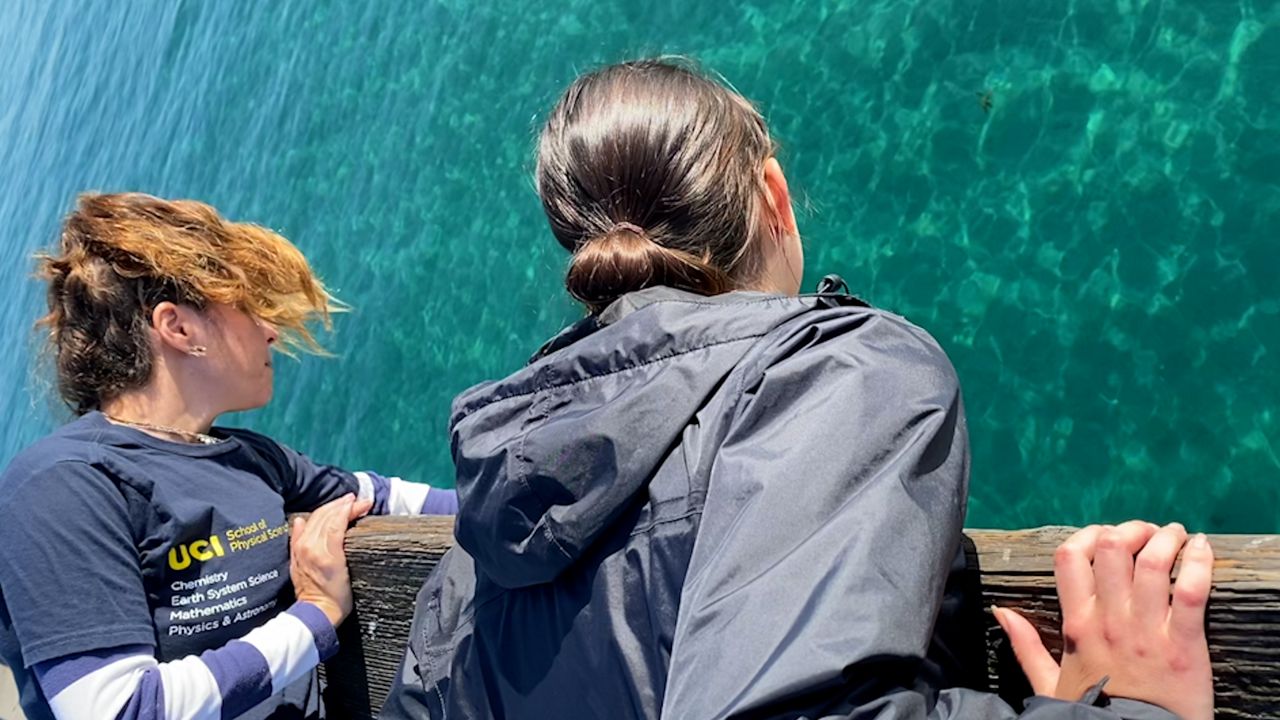 Some local scientists are taking a deep dive into how the oil spill may have affected some microscopic creatures. (Spectrum News 1/Jo Kwon)

IRVINE, Calif. — While the sheen from the major oil spill in October in Orange County has dissipated, some local scientists are taking a deep dive into how the spill may have affected some microscopic creatures.

Joana Tavares, a Ph.D. candidate in Earth system science, and Melissa Brock, a Ph.D. student in ecology and evolutionary biology, are spearheading the newly formed Southern California Oil Spill Project at the University of California, Irvine.


The researchers say they hope to figure out whether there have been any longterm effects to marine microorganisms from the recent oil spill.

Tavares says through analysis of ocean samples — which were collected three times a week using red buckets and ropes immediately following the October oil spill at the Newport Beach Pier and now once weekly — the team hopes to answer questions such as, “Did this oil spill create a big enough disturbance that is made up of these microorganisms to change in response to the disturbance?”

Tavares noted marine microorganisms as "so important," saying they are tiny but a huge part of the food web.

"They’re going to be feeding other smaller organisms like tiny little krill, which will then help feed the fish. So, in a way, these microorganism help support fisheries," she said. "These microorganisms that we call phytoplankton will actually be taking CO2, carbon dioxide, that is dissolved in the water that came from the atmosphere.”

Taveres added that she hopes to learn which organisms thrived or died during the spill and how long the spill effected the populations. They’ll compare their data back at a lab on campus to data from ocean samples collected for a decade under normal conditions.

Specifically, Tavares will be focusing on the following:

Brock will be focusing on bacteria. She laughed while collecting water samples at the Newport Beach Pier.

“I don’t want to imagine a world where there’s no bacteria in the ocean.”

Brock says bacteria play a lot of important roles in the ocean.

"Some bacteria act as a clean-up crew," she said. "And when an oil spill happens, they can take parts of the oil, break it down, use it as energy.”

Brock and the rest of the team will focus on the following:

Tavares said that while the ocean at local beaches such as near the Newport Beach pier looks “clean” now, "a lot of times, what the eyes see is not necessarily the full picture."

The team is attempting to get the full picture, or at least, a more detailed picture.

"There have been several large oil spills throughout the history of California," said Brock. "But nobody knows how those oil spills have affected the marine microorganisms."


Surfer Joaquin Romero was in the ocean enjoying some waves on one of the days Tavares and Brock were out collecting samples.

Romero says when the oil spill happened in October, he "was pretty bummed out," adding that he’s happy the scientists are continuing to study the potential effects of the spill.

"I’d be excited to see the results," he said.

It will be a few months of analyzing before any results will be seen. The scientists say the results will first be published in a peer reviewed journal. The results could be available to the public by next summer.

Tavares says that while some parts of science can be time-consuming, such as rinsing her red bucket and all materials used to collect the samples three times before any samples can be collected (to avoid an potential contamination), she says she loves what she does. She says science is "this constant quest to comprehend how we humans may be effecting these cycles."

You can learn more about the project here.