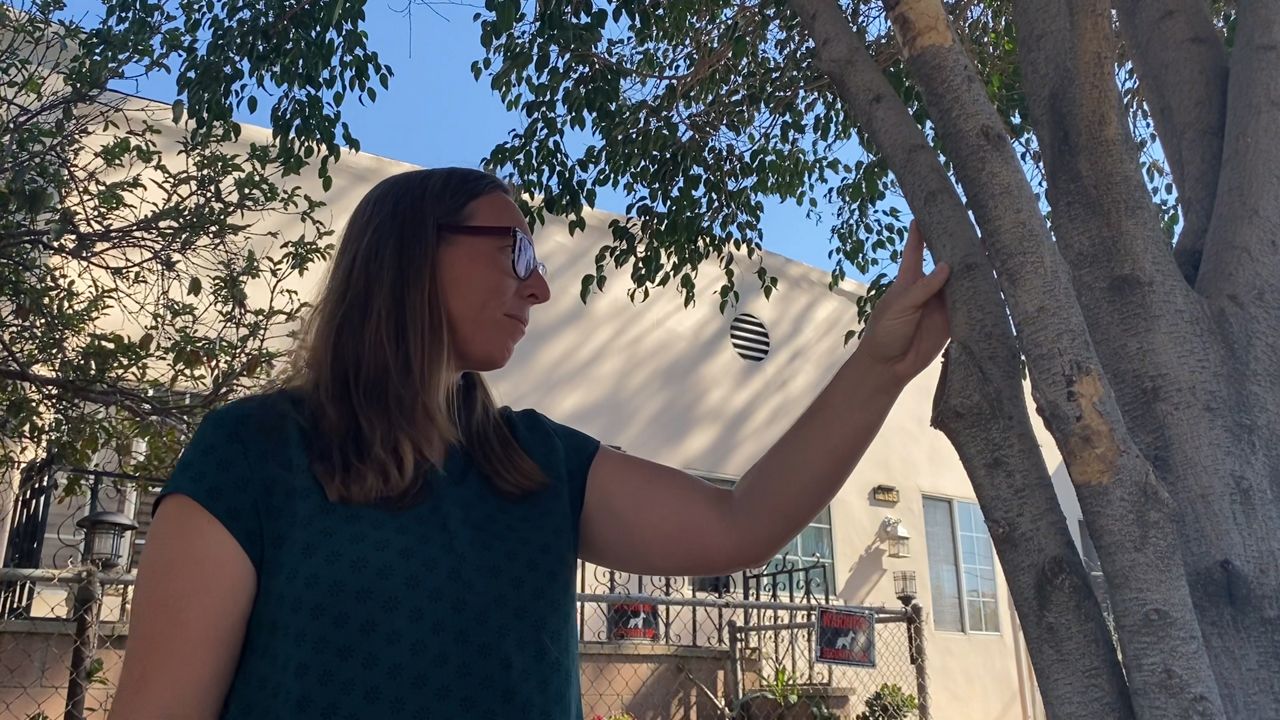 LA City Forest Officer, Rachel Malarich is focused on creating more equity when it comes to the urban canopy, or tree coverage in Los Angeles.

LOS ANGELES — For LA City Forest Officer, Rachel Malarich, access to trees and the shade they provide is a human right.

“It’s not just about a beautiful amenity, which is how trees were perceived in the past, it’s about health and wellness for our communities,” she said.

As LA’s first city forest officer, Malarich is focused on creating more equity when it comes to the urban canopy, or tree coverage in Los Angeles.

Many neighborhoods don’t have access to adequate amounts of green space or shade from street trees. On average, 21% of the city does have shade, but it’s not evenly distributed.

“The 21% coverage doesn’t tell the full story,” Malarich said. “We have four census blocks in more affluent neighborhoods that have about 19% to 20% of the total canopy in all of the city.”

Malarich and her team are working to create a tree inventory, tracking the trees that are already planted in Los Angeles, but she’s also planting new ones, focusing on areas that have been historically underserved and don’t have many trees. In Boyle Heights, for example, the tree canopy and shade coverage amounts to just 7%.

Trees are becoming a greater part of the city’s plan to tackle climate change, specifically issues related to extreme heat. Trees and shade can cool down neighborhoods as temperatures continue to rise in the coming years. But the city’s initiative is more complex and challenging than it might ostensibly appear. The species, for example, have to be carefully selected — certain species provide better quality shade.

The city also has to plant trees that won’t buckle sidewalks and roads and that are drought resistant. Plus, they have to take into consideration the preference of the individual community. Which trees will be generally popular and well-liked?

To help plan which trees should go where, what the benefits of certain trees are and how much they help with air quality, Malarich has been working with the USC Public Exchange Initiative, a partnership that brings different departments together to study the impact trees have on the city.

“USC has been helping us think very carefully about where we should make investments first,” Malarich said. “Since we aren’t going to plant every single available location at the same time, where can we start?”

Associate Professor of Practice of Landscape Architecture at USC, Esther Margulies is part of the Public Exchange team.

“We think we can provide, in public parks and public spaces, really significant cooling resources where we can lower the temperature up to 20 degrees, just by planting the right kind of large, high value canopy trees,” Malarich said.

The USC team is in phase two of the Urban Trees Initiative project and have already reported on the specific areas where trees would be most valuable.

They recommended focusing on areas with high population density and where household incomes were relatively low.

“Location of the trees is very important,” Margulies said. “We want to do a strategic study on where they will be most helpful to the people who need them, the people who are most vulnerable and can’t afford to go away when it gets hot.”

She adds that trees can play a significant role in the fight against heat-related illness and even deaths around Los Angeles.

“If we plant the right trees, they will be here for 100 years, maybe 200 years if we work it out correctly or properly,” Margulies said. “But we have to get started now. Every year we wait, we sacrifice some of the benefits of those trees.”

There’s also the matter of the beauty and mental health benefits that planting trees can provide. Malarich points out that those benefits are significant and add to the overall value of creating a greener, cooler city.

“They might not solve the problem of climate change, I’m not in any way saying planting trees will stop that from advancing,” Malarich said. “But it can improve the quality of life for people experiencing the impacts.”