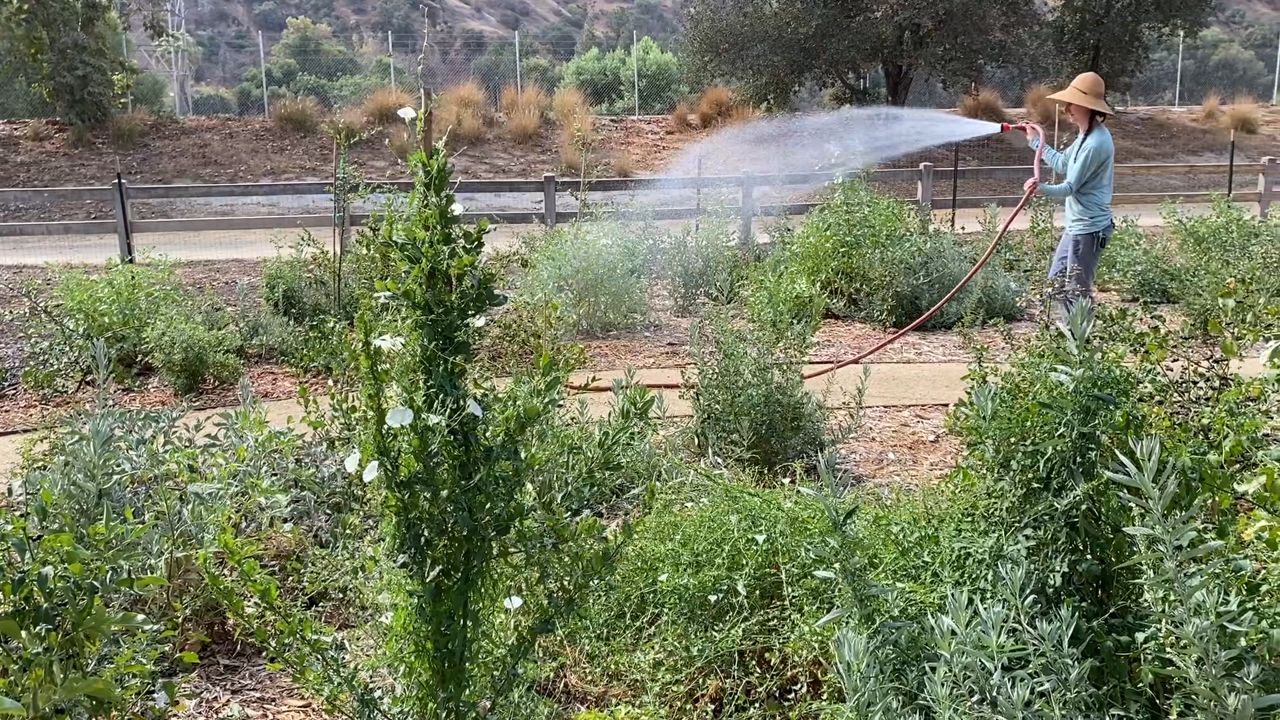 In the face of a huge climate crisis, can micro forests be the answer?

All across Los Angeles, hundreds of trees are being planted — an arboreous army designed to fight the effects of climate change.

Katherine Pakradouni is a project and program manager with Los Angeles Parks Foundation. She recently oversaw the planting of 20 trees in Hollenbeck Park, which is located in an area of Boyle Heights that has little tree cover and lots of exposure to the I-5 Freeway.

“The heating effects of all the concrete and all the urban infrastructure that we put around us really creates a negative impact to the community,” she said. “Just by putting shade trees of any kind, we're helping to mitigate some of that effect.”

September’s installation of 20 trees marks the seventh small forest planted in one year. Carolyn Ramsay, executive director of the LA Parks Foundation, explained that her goal is to plant 100 of these before 2030.

"They're just a win, win, win-win, win," she said. "They beautify the park. They shade the park. The average tree absorbs 48 pounds of carbon a year…They just suck all of these noxious pollutants out of the air."

But the project isn’t isolated to large shade trees. For Pakradouni, it’s also about taking any underutilized “patch of nothing,” as she called it, and turning it into a micro forest like the one she’s created at the Bette Davis Picnic Area in Griffith’s Park.

“This is the one that's my passion,” she said of the 1,000-square-foot lot that she began transforming only a few months ago.

What was once brown space may now look like a jumbled collection of mismatched greenery, but it’s actually a carefully researched and planned garden full of plants that Pakradouni personally grew from seeds.

“This is mugwort,” she said of one squat shrub. “These were the ones that were planted in four-inch pots. They were no bigger than this top growth, and in four months, they're already taking more than four feet in diameter.”

This micro forest, which was financed by the Hancock Park Garden Club and created in partnership with the LA Zoo Conservation Committee, is based on a technique pioneered by Japanese botanist Akira Miyawaki, who believes it may be the first project of its kind in LA. The idea is to plant a variety of indigenous species, trees and shrubs very close together.

“They're all hugging basically,” Pakradouni said.

By forcing them to compete for sunlight, they were found to grow taller and faster.

“The goal is that you can create a mature forest in 20 years, which might take Mother Nature to do in 200 years,” she said.

Pakradouni comes by to weed and give the plants a thorough soaking every 10 days or so, but she is slowly training them. The dense ground cover will eventually enable them to absorb water more efficiently, and in two years, she explained, the micro forest will be self-sustaining.

“You're maximizing water, and then you're also mitigating the effects of climate change for wildlife that don't have anywhere else to turn,” she said. “And so this could be the lifeline for a species, and you wouldn't even know it.”

With the climate change conference approaching, if Pakradouni could plant one seed in the mind of our global leaders, it would be: “Invest in ecology now. The best time was yesterday. We don't want to be running out of time.”

As for the rest of us, Pakradouni knows the issue can feel overwhelming but stresses that even a 1000-square-foot micro forest can make a huge impact.

“The goal is not that this individual project is saving the world,” she said. “It's that this individual project is becoming a model that can be implemented in schoolyards, in parking lots, backyards, front yards. It feels insurmountable to do really good work. And this kind of just shows you how much good work can be done in a very small footprint.”

Micro changes that expanded on a macro level could make a global difference.