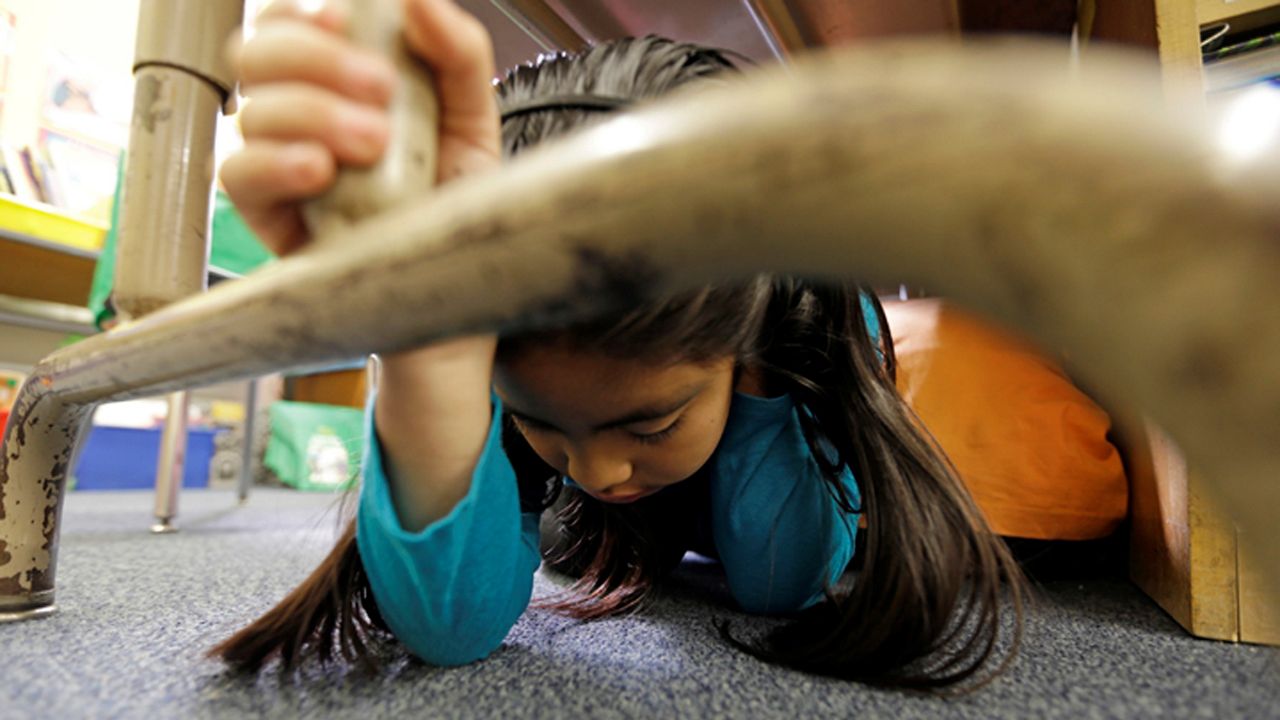 Lillian Zurita shows the proper way to "drop, cover and hold on" in Ms. Irvin's second-grade class during an earthquake drill known as the Great Shakeout at Rosemont Elementary School near downtown Los Angeles on Oct. 17, 2013. (AP Photo/Reed Saxon)

The Great California ShakeOut of 2021 is on Thursday

EDITOR'S NOTE: Multimedia journalist Chace Beech spoke with the senior director of homeland security & emergency services at LA Metro to see how they are preparing for earthquakes. Click the arrow above to watch the video.

LOS ANGELES (CNS) — People in government offices, businesses and schools throughout Los Angeles County will stop everything for a minute Thursday to "drop, cover and hold on" during a statewide earthquake preparedness drill, now in its 13th year.


"What we do to prepare now, before the next big earthquake, will determine how well we can survive and recover," according to a statement posted to ShakeOut.org. "Great ShakeOut Earthquake drills are annual opportunities to learn and practice earthquake safety with millions of people."

The ShakeOut website indicated that more than 7.5 million Californians are slated to participate in the drill. During last year's event, which was virtual in most places because of the coronavirus public health lockdowns, about 6.5 million people statewide were registered to take part.

The exercises began in 2008. According to the ShakeOut website, nearly 2.364 million people are registered to participate in the drill in Los Angeles County and 741,569 are registered in Orange County. Participants include the municipalities of Los Angeles, Burbank, Beverly Hills, Calabasas, Culver City and Long Beach.

"As Californians, it's critical that we know what to do and take steps to be prepared before, not after, an earthquake strikes," Los Angeles Mayor Eric Garcetti said. "Here in Los Angeles, we've made resilience a priority, retrofitting our most vulnerable buildings and delivering earthquake early warning to protect Angelenos' lives and property."

According to ShakeOut.org, the objective is to emphasize precautions during a 7.8-magnitude or larger quake along the southernmost portion of the San Andreas Fault. The U.S. Geological Survey says there is a 31% chance of a magnitude-7.5 earthquake or higher hitting LA in the next couple of decades.

Officials say such a tectonic shift could produce waves of movement for hundreds of miles, over four minutes. According to the USGS, some 2,000 people would die, tens of thousands would be injured and more than $200 billion in damage would result. The cataclysm would have 50 times the intensity of the Northridge earthquake, which occurred Jan. 17, 1994, and had a magnitude of 6.7.

Hundreds of aftershocks would ensue — a few of them nearly as big as the original quake, according to the USGS.

In 2019, the drill came just over three months after the early July quakes that struck Ridgecrest. The 6.4- and 7.1-magnitude shakers caused significant damage to roads and structures in the hamlet, which lies just south of the China Lake Naval Air Weapons Station.

Californians should be prepared to be self-sufficient for 72 hours following a major disaster. That includes having a first-aid kit, medications, food and enough water for each member of a household to drink one gallon per day, according to local and state officials.

Homeowners and renters should also know how to turn off the gas in their residences in case of leaks.

The American Red Cross on Wednesday reminded people to find cover under a table or sturdy piece of furniture and hold on during an earthquake. It also clarified that using doorways as protection is a myth. People who are outside when an earthquake hits should stay away from buildings, power lines, trees and street lights and drop to the ground until the shaking stops. Motorists should stay away from bridges, overpasses and power lines during an earthquake and find a clear location to pull over.

The Metro transit system on Tuesday announced an expanded implementation of an earthquake early warning system in preparation of the ShakeOut. The system is in place at all bus and rail divisions and uses the USGS ShakeAlert system to detect earthquakes with a 4.8 or greater magnitude and give people a few extra seconds of warning. Metro believes its deployment of the ShakeAlert system is the largest installation of an early warning system at a U.S. transit agency.