NORTHRIDGE, Calif. — As the effects of climate change worsen, water and energy will become even more precious. That’s especially true for agriculture, which uses 70% of the planet’s freshwater. So the Los Angeles Department of Water and Power has teamed up with the Electric Power Research Institute to test an indoor container farm in Northridge.

“We’re going to show the rest of the country that cities can be a part of the future of farming,” LA City Councilmember John Lee told Spectrum News 1. Lee represents the 12th council district in the Northwest San Fernando Valley where the city’s first pod farm was unveiled Thursday at the LAPD Devonshire PALS youth center.

“It’s sustainable. It uses 95% less water and electricity,” he said. “And we’re going to be able to grow crops throughout the year.”

While the 40-foot, eight-ton container will be part of a research project for the next two years, it is a permanent installation that will first be used to grow kale and eventually other crops that can help feed the community while teaching young people about technology and efficient farming practices. 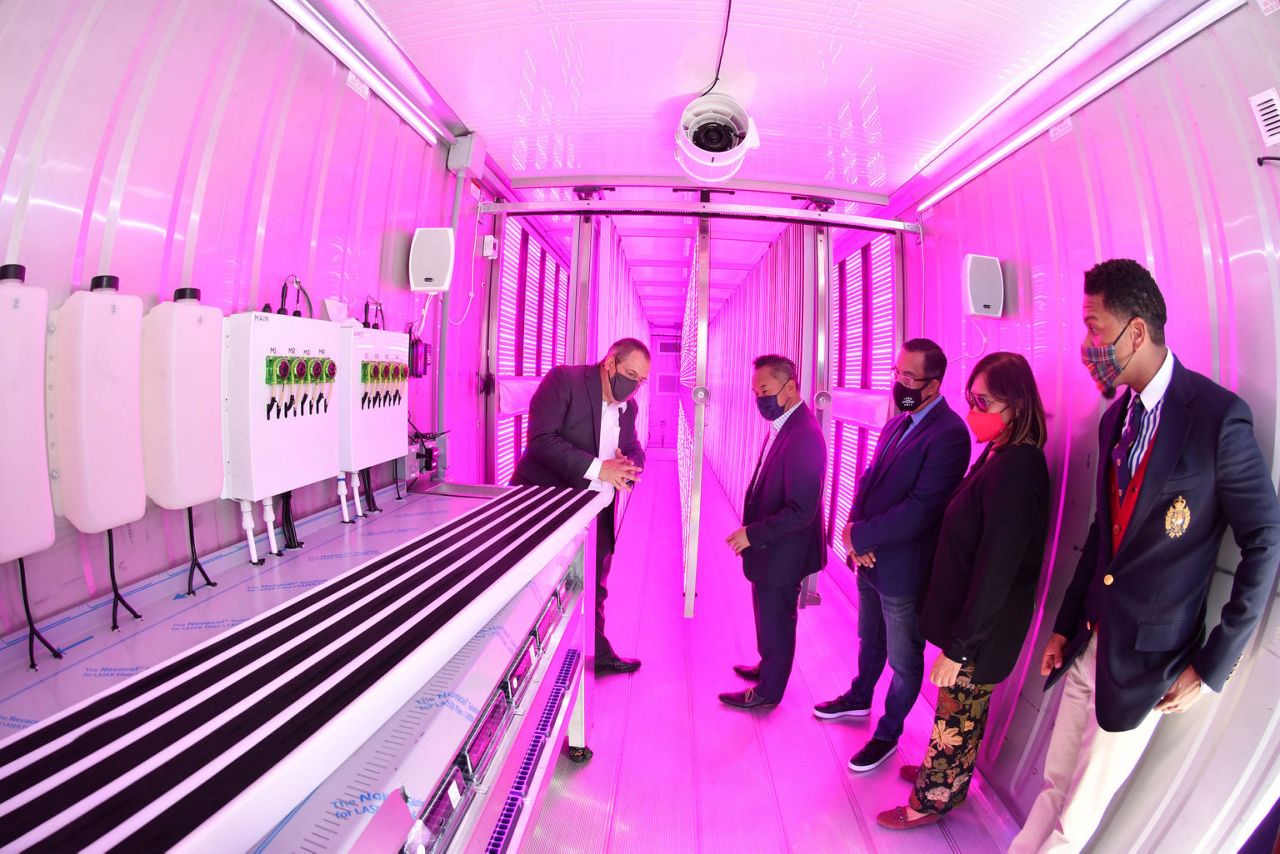 “Every little step teaching our kids helps battle what we’re all going through: climate change and our water shortage,” Lee said.

LADWP is one of 14 utilities that is working with the Electric Power Research Institute on a two-year study to help utilities understand the impacts of indoor food production. Researchers will monitor each site to evaluate energy and water usage.

Sharp said the world’s population is expected to expand “by two billion mouths by 2050” and a lot of those people will be located in urban areas. With 80% of the world’s arable farmland already being used, “to meet that food obligation, we have to become more creative in the way we grow crops.”

Indoor farming allows food to be produced closer to where it is consumed, which, when it’s grown in urban areas, has implications for the utilities that provide the water and power to make it happen. Part of EPRI’s research with the indoor farm in Northridge is to “help utilities think about ways to be working with communities to benefit both the grid with efficient technologies and efficient use of energy, water and sustainability and also community impact.”

The indoor container farm at LAPD Devonshire PALS youth center will grow crops in vertically stacked layers using less-water-intensive hydroponics, which eliminates the need for soil and pesticides. In addition to saving water, indoor farming uses LED grow lights that save energy, helping to reduce costs and carbon emissions while increasing crop yields by as much as 50% compared with traditional farming.

“The urgency of climate change is here,” said LADWP’s Manager of Corporate Sustainability, Maria Sison-Roces. “It takes an all-hands, all-of-the-above approach. This indoor container farm is a smart program because it will be a gift that continues to give. It will produce year in year out.”