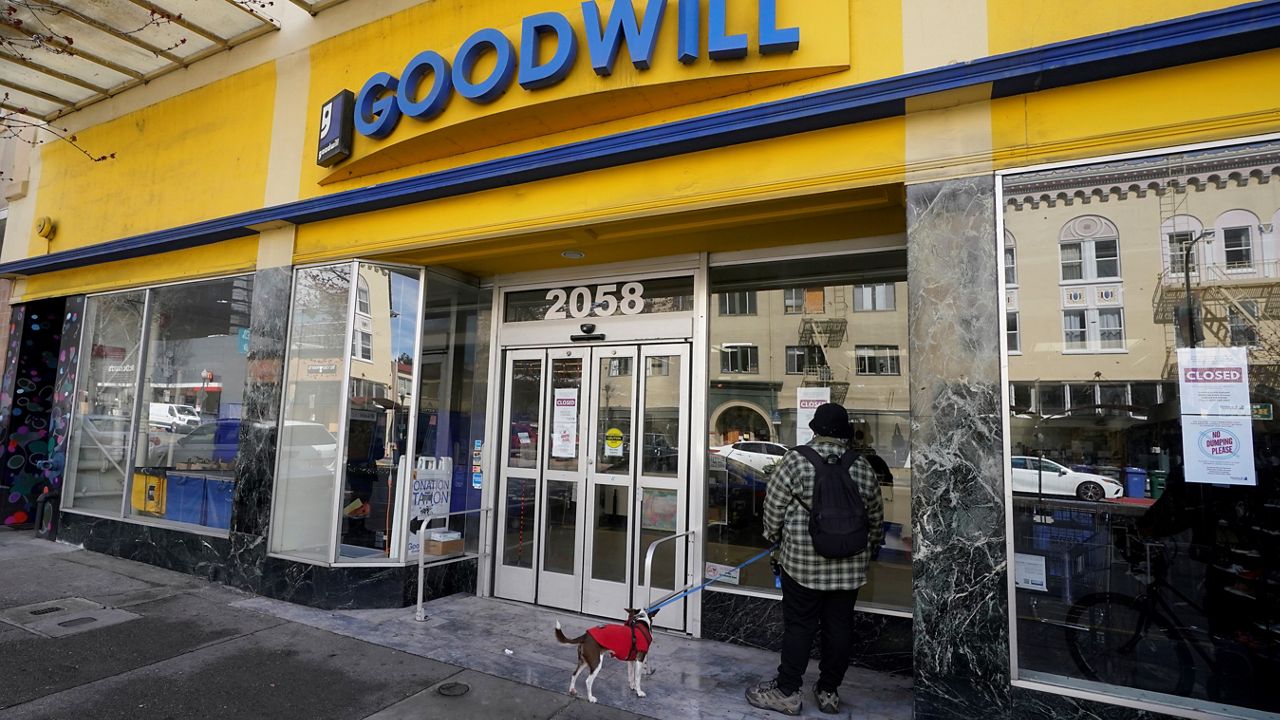 In this March 9, 2021, file photo, a person walking a dog looks inside a closed Goodwill store in Berkeley, Calif. (AP Photo/Jeff Chiu)

When it comes to climate change, gas-powered vehicles get a lot of the blame. But another contributor is our closets. The fashion industry is responsible for 10% of global greenhouse gas emissions, according to the United Nations Environment Programme.

Blue jeans. T-shirts. Dresses. It takes a lot of natural assets to make them, so some savvy teens are turning to secondhand clothing.

“I’m worried about Earth running out of resources,” 16-year-old Sevilla Tovar said during a recent trip to a Goodwill of Southern California outlet store, where she bought $20 worth of pre-owned clothes. “I feel like not a lot of people understand just how quickly we’re running through what we have.”

Just 13% of clothes and shoes are recycled out of the 17 million tons of textiles that are generated each year. The rest are either incinerated or landfilled, along with the precious natural resources it took to make them.

“The ones that are the real problems have to do with non-organic cotton that uses a lot of water, things being made in distant places, how are they being made and what kind of carbon emissions are associated with that,” said Thomoas Kostigen, author of “Hacking Planet Earth” and the “The Green Blue Book,” which details how much water is used to make common household items.

To dye a pair of blue jeans takes 3,000 gallons of water, Kostigen said. According to the United Nations, 20% of the world’s wastewater is generated from dyeing and treating fabric.

“When you’re buying second hand, you’re buying these already created T-shirts, so you’re eliminating your carbon footprint,” Tovar said. Between the clothes she buys from thrift shops and the castoff jewelry she gets from her family, she said 50% of her wardrobe is used.

Sevilla is like a lot of American teenagers today. Almost half of them are now purchasing at least some of their clothes used, and the trend is accelerating, according to recent surveys from Piper Sandler.

“We have noticed a lot of young people shopping with us because they are interested in the environment,” said Goodwill of Southern California Spokeswoman Marla Eby. Goodwill’s SoCal operations keep more than 130 million pounds of items out of landfills each year.

“Teens want to purchase gently used items that are sustainable,” she said. “Perhaps you don’t love something but somebody else will.”

At the Goodwill outlet store on San Fernando Road, shoppers buy clothes by the pound. Afterward, many of them show off their hauls with unbagging videos they film outside the door and post to Instagram, TikTok, YouTube and other social media sites.

“The little things I do will hopefully add up to a difference,” said Sevilla, who also practices environmentalism with refillable water bottles and reusable plastic food containers. “I feel like it’s small, but if I keep doing it, I feel like it will end up being good for our planet.”