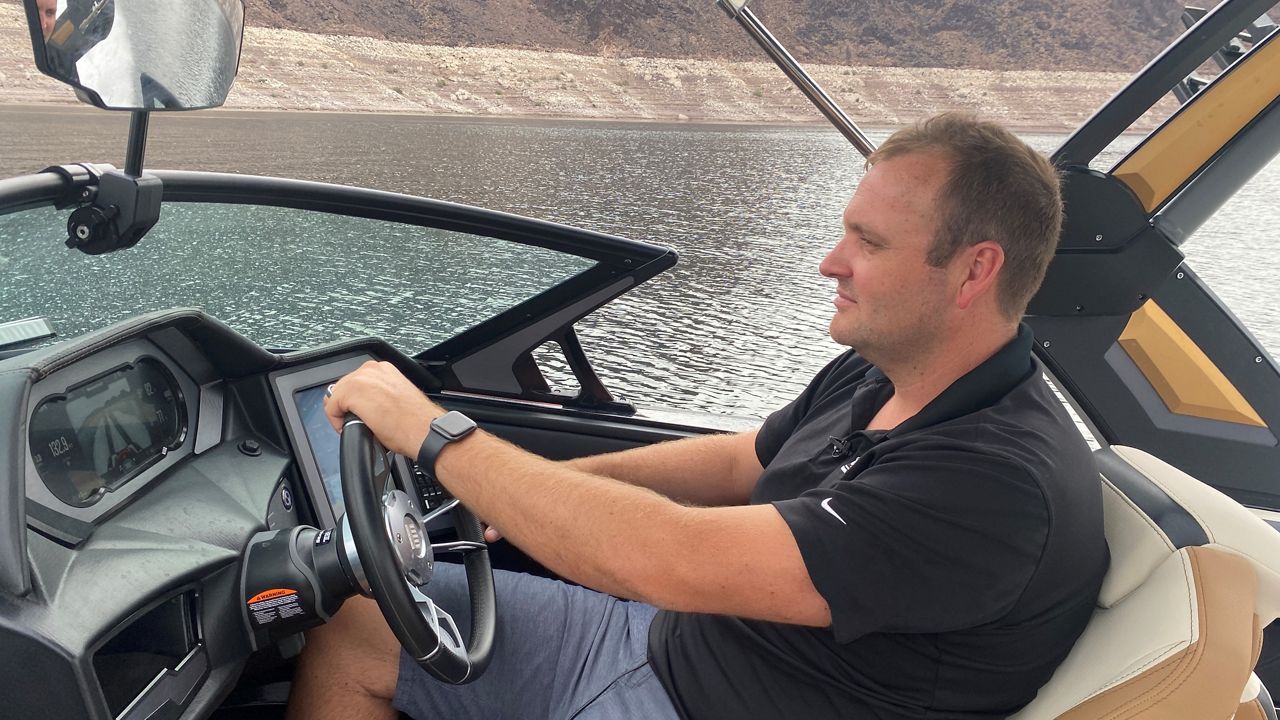 It's a constant reminder for Boating Lake Mead's Director of Operations, Bruce Nelson.

The lake is at a historically low 1,067-feet above sea level, affecting boat launch ramps and customers.

"Now, they're down to one or two lanes and you might have to wait awhile, and that's problematic for boaters trying to get out and enjoy themselves or get off the lake and go home," Nelson said.

Nelson's grandparents built the family-run marina back in 1957.

But the launch ramps weren't designed for the water's current level.

Now, boaters can wait up to three hours to get in or out of the water.

The National Park Service extends the launch ramps, but Nelson has to keep moving the marina as the water levels drop.

It's a big investment in time and money.

"We have to add power and sewer, and water, and stations, and all these things that nobody sees that have to exist for the marina to be there," Nelson said.

But decades of drought have caused record-low levels, prompting the Bureau of Reclamation to declare its first-ever water shortage for 2022.

"Temperatures are higher, and faster than we expected, the soil moisture is extremely low in the Upper Basins," Aaron said.

That means snowmelt seeps into the parched soil rather than running off into the Colorado River and Lake Mead.

Aaron said communities need to work together to combat the problem.

"Collaboration is key. The Colorado River is the lifeblood of the Southwest and everybody is working toward a solution as opposed to fighting," Aaron said.

It had to make changes after using more than its allotment of Colorado River water back in 2002.

"Today, we're taking less water from the Colorado River than we did in 2002, we're using less water per capita by almost 50%, and we've added 750,000 people in the meantime," Pellegrino said.

Now Colby has set her sights on improving water efficiency in agriculture, which consumes about 80% of the Colorado River's water.

But she knows, eventually there will be a limit to how much you can conserve and how many people you can provide for.

"We have to be realistic about what the flows of the river are when we're making all of these projections of what we need to do to get there. I think that may be a struggle, is really getting our hands around what those climate change projections look like," Pellegrino said.

Climate change is creating uncertainty, making it harder to predict snowfall and what Lake Mead will look like in the decades ahead.

So Bruce says to save this water supply for generations to come, it's up to all states who depend on the Colorado River to conserve.

"It would be nice to see the same regulations that are in Las Vegas such as when you water your lawn, how much lawn you're allowed to have, buying back lawn and putting in desert landscaping. It would be nice to see that happen in other states too where you don't see the lowering lake level you just turn your faucet on and water is there," Pellegrino said.

But he said he hopes that water consciousness can be enough to avoid the lake's level from falling further, risking more water cuts, and exposing more of the bathtub ring, an unavoidable truth that the West is drying up.